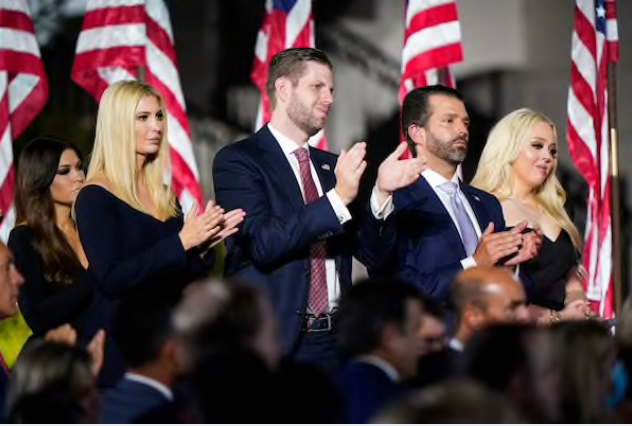 WASHINGTON – Eric Trump took his Secret Service agents to Trump golf courses in Scotland, as he led transatlantic tours for paying customers. Donald Trump Jr. took his protectors to the Trump hotel in Vancouver, stopping over on hunting trips to Canada.

And Ivanka Trump took her Secret Service detail to the Trump golf club in Bedminster, N.J., again and again — even after she asked other Americans to “please, please” stay home during the coronavirus pandemic.

On trips like these, Secret Service agents were there to protect President Donald Trump’s children. But, for the Trump family business, their visits also brought a hidden side benefit.

That’s because when Trump’s adult children visited Trump properties, Trump’s company charged the Secret Service for agents to come along. The president’s company billed the U.S. government hundreds, or thousands, of dollars for rooms agents used on each trip, as the agency sometimes booked multiple rooms or a multiroom rental cottage on the property

In this way, Trump’s adult children and their families have caused the U.S. government to spend at least $238,000 at Trump properties so far, according to Secret Service records obtained by The Washington Post.

Government ethics experts say that nothing is wrong with Trump’s children seeking protection from the Secret Service.

But, they said, the Trump Organization’s decision to charge for the agents’ rooms created a situation in which – just by traveling – Trump’s children could bring taxpayer money to their family’s business.

That, ethics experts said, could create the appearance that Trump family members were exploiting their publicly funded protection for private financial gain.

“Morally speaking, do they want to profit [from the fact] that their father’s in the White House?” said Scott Amey, of the watchdog group Project on Government Oversight. “They could very easily reimburse those expenses, so the federal government and the taxpayer are not on the hook for that tab.”

Many of Trump’s marquee properties, such as his Doral resort in Florida and his hotel in Washington, have struggled in recent years, weighed down by Trump’s divisive politics. Last week, The New York Times reported that Trump’s tax returns show that his businesses lost millions of dollars in recent years – even before the pandemic, which slammed the travel business and caused widespread closures and layoffs at Trump properties.

The Secret Service and the White House declined to comment for this article, as did Ivanka Trump – the president’s eldest daughter, who left the Trump Organization to work in government. The president’s other adult children – Eric, Donald Jr. and Tiffany – did not respond to requests for comment.

Eric Trump and Donald Jr. are said to run the Trump Organization day to day, although their father still owns it.

In the past, Eric Trump has defended the company’s decision to charge the Secret Service for rooms at Trump properties, saying the law does not allow them to give rooms free. He has not said what law he is referring to. He has said, however, that the company charges the government very low rates – “We charge them cost, effectively housekeeping cost,” he said in a Fox News podcast earlier this year.

“I joke all the time that I would like nothing more than to never have another person from the government stay at one of our properties because it displaces a true paying guest,” Eric Trump said on the podcast.

Neither the White House nor the Trump Organization will say how much the government has paid to Trump’s business in total since he took office.

Instead, The Post has compiled its own accounting, one receipt a time, using public-records requests and a lawsuit. After the release of new records last month, that total now stands at $1.2 million – most of which is related to Trump’s own travel, which includes more than 270 visits to his properties, according to The Post tally.

Previously, records obtained by the watchdog group Citizens for Responsibility and Ethics in Washington showed that agents had accompanied members of the Trump family on thousands of trips since the president took office.

But until now, it was not clear how much taxpayer revenue Trump’s children’s travel had brought back to their father’s company this way. The latest batch of Secret Service records obtained by The Post provides a clearer picture, by identifying Trump’s children as the drivers behind dozens of such transactions.

In most cases, the Secret Service redacted the room rates it had been charged by the Trump Organization, making it difficult to check Eric Trump’s assertion that the company charged only enough to recoup housekeeping costs.

Among the bills that did list a room rate, the cheapest rate was $175 per night, for a room at the Trump hotel in Washington. But the rates at times climbed much higher.

These payments stand in contrast to a philosophy that Eric Trump laid out in the early days of his father’s presidency, that the family would not use Trump’s power for financial gain.

“There are lines that we would never cross, and that’s mixing business with anything government,” Eric Trump told The Post in 2017.

Among Trump’s four adult children, the youngest – Tiffany Trump – appears just once in the Secret Service records obtained by The Post. She accompanied her older brothers to the grand opening of the Trump hotel in Vancouver in 2017. Their combined Secret Service details required 56 rooms, and the Trump hotel charged the government $14,900. Tiffany Trump did not respond to requests for comment.

The records also show about $29,000 in federal payments to Trump properties that related to travel by Donald Trump Jr. Trump Jr. stayed repeatedly at the Trump hotel in Washington – just blocks from his father’s residence at the White House. His trips included two to testify to Senate committees investigating Russian interference in the 2016 presidential campaign.

He also made several return trips to the Trump hotel in Vancouver. A former manager at that hotel said Trump Jr. sometimes visited on his way to or from fishing or hunting trips in Canada.

“We would at least seal off 15 rooms” for Trump and his Secret Service agents, the former manager said. The former manager asked not to be identified to preserve relationships in the hotel business.

Trump does not own the Vancouver hotel, but his company is paid to manage the property and license Trump’s name. The Vancouver Trump hotel is now shuttered: The owner of its building declared bankruptcy in August, blaming a drop in business caused by the coronavirus pandemic.

In the records obtained by The Post, travel by Ivanka Trump and her family accounted for more than $42,000 in federal payments to Trump properties.

Much of that total came this spring, after Ivanka Trump had urged other Americans not to travel.

“For those lucky enough to be in a position to stay at home, please, please, do so,” Ivanka Trump said, in a video she posted to Instagram on March 29. “Each and every one of us plays a role in slowing the spread.”

Between mid-March and mid-June, the Secret Service records show 13 trips to Bedminster by Ivanka Trump or her husband, Jared Kushner, plus three others by Trump family members whose names were redacted. For most of that time, D.C. and New Jersey were asking residents to stay home if possible to avoid spreading the coronavirus. A spokesman for Kushner did not respond to a request for comment.

During this period, the Trump golf club charged the Secret Service even more than usual for rooms at Bedminster. The typical rate, during past visits by Trump family members, was $567 per night for agents to stay at a four-room cottage at the club.

This spring, records show, the average payment per night went up to about $630. The records don’t say why the charges increased.

Among some Secret Service agents working at the club, there was concern that Ivanka Trump’s decision to leave home had increased their risk of exposure to the coronavirus. There was no routine testing for the virus among agents assigned to the club, and agents said they were rebuffed by superiors when they asked for ultra-protective N95 masks, according to two people familiar with those discussions. The person relayed the conversations on the condition of anonymity because they were not authorized to speak publicly.

The records obtained by The Post showed that Eric Trump and his wife, Lara, an official with Trump’s reelection campaign, were responsible for about $151,000 in government payments to Trump properties.

The records show that Eric Trump has repeatedly taken Secret Service agents along on golf trips, where he leads members of U.S. Trump golf clubs on guided tours of Trump courses in Ireland and Scotland.

“Touchdown Scotland. @EricTrump and 32 of our members from @TrumpCharlotte have arrived at @TrumpScotland for the first day of the 2019 @TrumpGolf Ultimate Links Tour!” the Trump Organization posted on Instagram on May 16, 2019. The photo showed Eric Trump posing at Trump’s golf course in Aberdeenshire, Scotland, with visiting members from the Trump golf club outside Charlotte

In all, the records recently obtained by The Post show 87 payments where one of Trump’s children had brought federal revenue to a Trump property.

At times, because Trump and his children were traveling separately, two Trump clubs charged the government on the same day. And there was one day – July 25, 2017 – when the Trump Organization did business with the government in three countries at once.

On that day, records show, the government paid a $6,500 bill from Trump Doonbeg in Ireland, where Secret Service agents had just accompanied Eric Trump on a visit. Across the world in Canada, agents were just arriving at Trump Vancouver for a stay with Donald Trump Jr. that would cost the government $5,800.

And in Bedminster that day, Trump’s club charged the Secret Service its usual nightly rate: $567 for the rented cottage, record show. Because of Trump’s spur-of-the-moment travel habits, officials have said that the Secret Service rents the Bedminster cottage every day from May to November, just in case he visits.

In fact, on that day, Trump wasn’t at Bedminster.

He was headlining a political rally in Youngstown, Ohio.