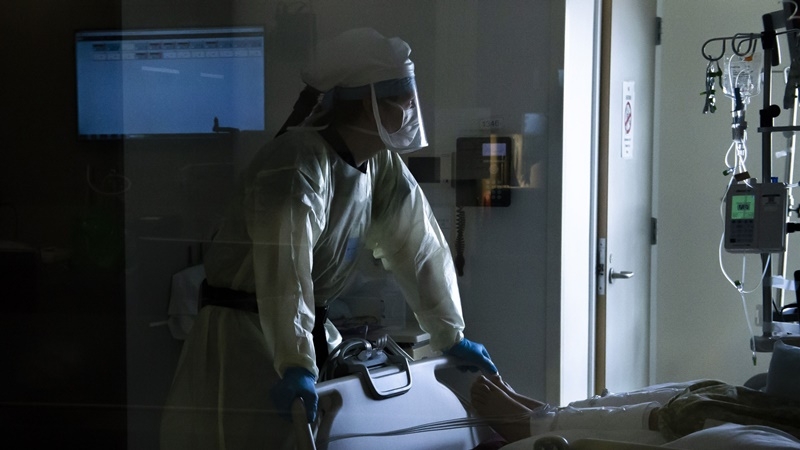 A grim reality is setting in across the U.S. hospital sector: a surge in coronavirus infections is encroaching while most facilities are still recovering from the onset of the pandemic.

The growing number of cases is threatening the very survival of hospitals just when the country needs them most. Hundreds were already in shaky circumstances before the virus remade the world, and the impact of caring for Covid patients has put hundreds more in jeopardy.

The new coronavirus sidelined profitable elective procedures and pushed up costs to keep patients and staff safe. Meanwhile, hospitals are losing the privately insured patients they depend on as millions of Americans lose their jobs and employer-sponsored coverage.

“It sort of all comes together as essentially a triple whammy,” Aaron Wesolowski, vice president for policy research, analytics and strategy at the trade group American Hospital Association, said in an interview.

More than 215,000 Americans have now died from the novel coronavirus and 7.8 million have had confirmed infections, numbers that set the U.S. apart on the world stage. Though new virus cases fell last month after a summer spike, covid-19 is again on the rise, especially in the Midwest. Thirty-eight states are now considered hot spots, according to the Kaiser Family Foundation, which considers rising cases, test-positivity rates and new daily cases per million population in its analysis.

The AHA has estimated the pandemic will cost U.S. hospitals more than $323 billion through the end of this year. U.S. hospital revenue totaled about $1.1 trillion in 2018, according to the most recent AHA data available. The industry group is asking Congress for an additional $100 billion and full forgiveness of loans made under Medicare’s accelerated payment program, among other requests for relief.

As many as half of hospitals could be losing money by year end, Wesolowski said, citing a report it released in July from Kaufman, Hall and Associates. That’s up from about a third that were operating at a loss ahead of the pandemic.

More than three dozen hospitals have already entered bankruptcy this year, adding to a similar number last year, according to data compiled by Bloomberg. More than a dozen in rural areas have also shut their doors, according to the Cecil G. Sheps Center for Health Services Research at the University of North Carolina. The AHA put the total U.S. hospital count at 6,146 in its most recent report, a decrease of 64 from the previous year.

The financial pain has flowed through to Wall Street. Many of the hospitals that entered bankruptcy this year were part of Quorum Health Corp.’s Chapter 11 filing in April. Quorum’s 24 hospitals and other facilities struggled under the demands of treating coronavirus patients. In late June, a judge approved the company’s exit plan, which wiped out shareholders and handed the chain to creditors.

Returns on junk-rated hospital municipal bonds are down nearly 4% this year, recovering after losing 10% in March. As the pandemic set in, Wall Street banks saw a rush of hospitals draw down existing credit lines and were inundated with requests for new or expanded financing. Junk-rated munis have since rallied and are overall little changed this year as investors seek higher-yielding securities.

Across the U.S., hospitals are struggling to balance their books and in some cases, already shutting their doors.

“Rural hospitals are closing down right and left,” Bert Cunningham, city manager of Bowie, Texas, said in an interview.

Central Hospital of Bowie closed in February and its owners filed for bankruptcy two months later, debilitated by years of red ink, Cunningham said. Now the property is up for sale for any use, potentially leaving the 10,000 residents in its service area — many of whom are elderly — 30 miles from the nearest acute-care emergency room, he said.

The hospital’s closing could prompt a broader business exodus from the area. “I’ve had local industry tell us they would consider cutting staff or closing down,” only adding to the area’s uninsured, he said.

The pain, though, spreads far beyond smaller communities to larger facilities treating some of those most at risk for serious illness.

Nearly a thousand miles from Bowie, Loretto Hospital on Chicago’s West Side was also coping with its own challenges. Even before the pandemic, life expectancy in the city’s Austin neighborhood was just 68.2 years — 20 years shorter than a few miles away downtown, according to Chief Executive Officer George Miller. A full three-quarters of Loretto’s patients have no insurance or Medicaid, with the latter reimbursing Loretto at about 25 to 30 cents on the dollar, Miller said. Medicare, which represents just 12% of patients, pays about 50 cents.

The hospital received two rounds of CARES Act money, most recently for $500,000, but with $100 million of annual hospital expenses, Miller says it’s not nearly enough. The hospital has spent well over a $1 million on goods to protect its workers. When hospitals throughout the country were scrambling for supplies, he managed to procure personal protective equipment through connections with old fraternity brothers.

Larger hospitals hit by later waves of cases learned how to isolate Covid patients and convince others to come in for some elective surgery — the more profitable procedures that pay the bills, said Sanjay Saxena, co-leader of The Boston Consulting Group’s Center for U.S. Health Care Reform and Evolution. But disparity between the leading facilities and the rest is getting starker, he said.

Millions of new job losses mean a cut in the number of Americans with private insurance — a critical component for hospitals since federal payments don’t cover the bills. In an April report, Saxena said almost two-thirds of U.S. hospitals face “material financial risk” — compared with 20% pre-pandemic — with options extremely limited for the 25 to 30% at the very bottom.

“There’s not a logical savior for that group,” he said. “No one’s running to go buy hospitals and certainly not those.”

Over the years, Bowie, Texas, coped with declining federal payments and residents using its emergency room for free primary care. Now, with layoffs mounting amid virus-induced closures, yet another stream of income is dwindling. “If someone loses their health care they had through work,” Cunningham said, “Who picks up the tab?”

In Chicago, Miller says his facility is carefully managing cash and expenses, sometimes through delayed payments to certain vendors, and thankfully has no debt. “Candidly, we rob Peter to pay Paul,” Miller said.

Loretto did get some good news recently, learning that Merck & Co. had selected it as a site for clinical trials of its coronavirus vaccine, Miller said.

Meanwhile Mercy Hospital & Medical Center on the South Side, the oldest in the city and one that treated patients from the great fire in 1871, has announced it’s closing next year. Says Miller, “Nobody rushes into the inner city, the West Side of Chicago to build a hospital.”