Shenzen becomes model for next China’s ‘miracle’, Xi: Forge ahead with reform, opening-up 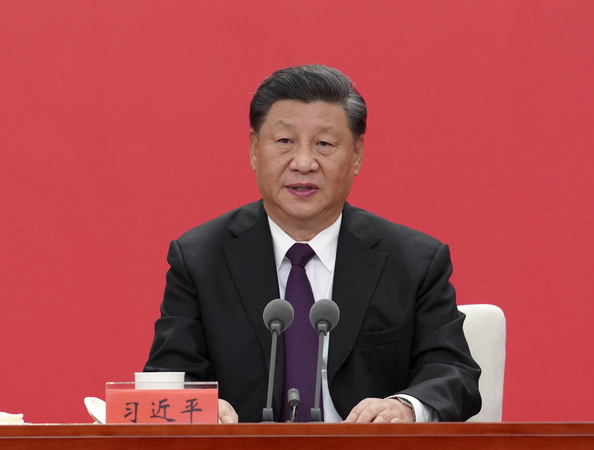 President Xi Jinping attends a grand gathering on Wednesday celebrating the 40th anniversary of the establishment of the Shenzhen Special Economic Zone, and he delivers a speech at the event in Shenzhen, Guangdong province. FENG YONGBIN/CHINA DAILY

President Xi Jinping reaffirmed on Wednesday China’s commitment to forging ahead with reform and opening-up as he outlined a new vision for Shenzhen 40 years after it was set up as the country’s first special economic zone.

In a speech delivered at a celebration marking the 40th anniversary in Shenzhen, Xi urged the city to develop into a pilot zone for socialism with Chinese characteristics and set an example for cities of a modernized socialist nation.

He said reform will not come to a standstill, and opening-up will only go further.

“Reform and opening-up must be moved forward at a higher level, and new advances must be made in work on the fronts of special economic zones”, said Xi, who is also general secretary of the Communist Party of China Central Committee and chairman of the Central Military Commission.

Xi outlined the new historic mission for Shenzhen in the new era, saying that the city must bolster its capacities and levels to implement the new development philosophy, strive to deepen reform and expand opening-up in a comprehensive manner and promote the development of the Guangdong-Hong Kong-Macao Greater Bay Area.

In addition, the city should enrich the new practice of “one country, two systems” and take the lead in achieving socialist modernization, he said.

In his speech, Xi also recalled the decision-making process for setting up the special economic zones 40 years ago, which also include Zhuhai and Shantou in Guangdong province and Xiamen in Fujian province.

Their establishment was a great pioneering act for the Party and the country to promote reform, opening-up and socialist modernization, Xi said.

Shenzhen has become a new city built by the Party and the people after reform and opening-up and is also a marvelous illustration of socialism with Chinese characteristics, he said.

Hailing the city’s development as a miracle created by the Chinese people, he mentioned that the city’s GDP surged to 2.7 trillion yuan ($401 billion) in 2019 from 270 million yuan in 1980 in what he described as “a historic leap from a backward border town to an international metropolis with global influence”.

The successful use of special economic zones, including Shenzhen, has proved that the strategic decision of the CPC Central Committee is absolutely right, he said, adding that the development of SEZs must be continued at a better and higher level.

Going forward, Xi said it is important for Shenzhen to unwaveringly carry out innovation-driven strategy, foster new growth engines and become a leading hub in scientific, technological and industrial innovation with global influence, he said.

He highlighted the need to plan the development of strategic emerging sectors, foster the growth of future industry and develop the digital economy, adding that more investment must be made in fundamental and basic research that can be applied.

The growth of the modern service sector, such as finance, research and development, design, legal services and conventions and exhibitions must be stepped up, he said.

The city must follow a more open policy to attract and cultivate a group of world-class talent in areas such as strategic science and technology and high-caliber innovation teams, Xi said.

“Reform has come to a new historic point, and many problems (we face) are unprecedented, new ones. The level of complexity, sensitivity and difficulty in pressing ahead with reform is no easier than 40 years ago,” he said.

He added it would require greater political courage and wisdom and sticking to the approach of “crossing the river by feeling the stones” to enhance top-level design and deepen reform in key areas and procedures.

Xi pledged support to the city in piloting reforms in a number of key areas, such as improving the system and mechanism for market allocation of resources, the business environment, the high-level open economic system and the governance system for the ecology, the environment and urban space.

In pushing forward across-the-board opening-up, Xi called for efforts to accelerate advancing opening-up with institutional guarantees such as rules and norms, and explore a more flexible policy system and a more scientific management system in terms of domestic and foreign trade, investment and financing, finance and taxation, financial innovation and personnel exit and entry.

He highlighted the challenges faced by the city in urban governance and lack of urban space for development, saying that it should accelerate steps to modernize its governance system and capacities.

Xi underlined the solid implementation of the people-centered philosophy of development in the reform and development of SEZs, with efforts to address issues in areas such as employment, education, medical care, social security, housing, elderly care, food safety, the environment and public security.

The president also urged the city to seize historic opportunities arising from the development of the Guangdong-Hong Kong-Macao Greater Bay Area, stressing that rules and mechanisms for the economy in the three areas must be better synergized and the development of intercity railways must be accelerated.

Also on Wednesday, Xi presented a flower basket at the statue of former leader Deng Xiaoping at Lianhuashan Park in Shenzhen, expressing his deep respect for Deng.