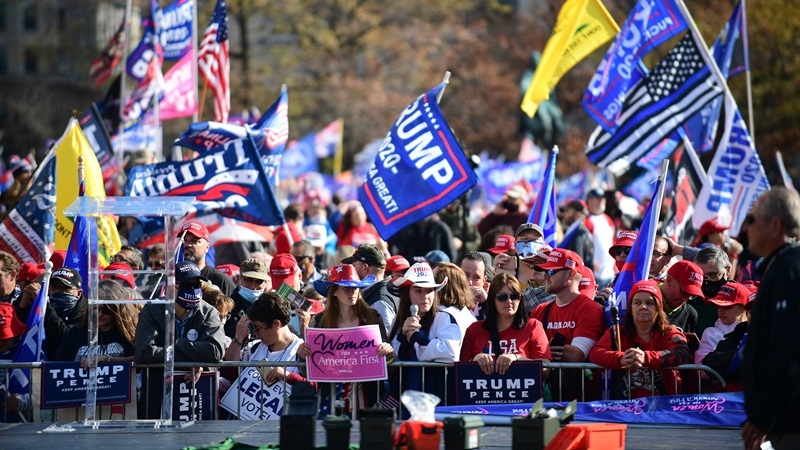 Supporters of President Donald Trump, including White supremacists and far-right extremists like Proud Boys, Oath Keepers, Nicholas Fuentes and Jack Prosobiec, rally at Freedom Plaza in Washington, D.C., on Nov. 14, 2020, to show their alliance in the president’s fight to deny his electoral defeat. MUST CREDIT: Photo for The Washington Post by Astrid Riecken

WASHINGTON – The Trump administration is ending as it began: with a lie about crowd size.

A view of the crowd at the U.S. Capitol ahead of the inauguration of President Donald J. Trump on Jan. 20, 2017. MUST CREDIT: Washington Post photo by Bill O’Leary

On Saturday, White House press secretary Kayleigh McEnany tweeted out two overhead photos of President Donald Trump supporters who had gathered for a pro-Trump march in Washington, writing, “AMAZING! More than one MILLION marchers for President @realDonaldTrump descend on the swamp in support.”

McEnany was off by many orders of magnitude – the crowd of thousands was a notable show of force, perhaps, but a far cry from the million marchers she claimed.

Her hyperbolic assertion was reminiscent of another baseless claim made by another Trump press secretary nearly four years ago. Sean Spicer stepped behind the briefing room lectern on his first full day on the job and, at the president’s urging, told falsehoods about the size of Trump’s inauguration crowds.

“The only tragedy about the lie about crowd size is he’s always capable of finding people willing to lie for him,” said Anthony Scaramucci, who served as Trump’s communication director for 11 days and has since become an outspoken critic of the president.

McEnany did not respond to requests for comment about how she arrived at the incorrect 1 million figure. Trump himself tweeted Sunday that “tens of thousands” had demonstrated.

The symmetry does not end with the exaggerations about crowd size. Trump’s one-term presidency is poised to come full circle in myriad ways, from a consistent lack of strategic vision to his enduring efforts to delegitimize his political rivals, whoever they might be.

Trump began his political career with the mendacious claim of birtherism – the racist lie that former president Barack Obama was not born in the United States – as part of an effort to delegitimize his predecessor. And he is ending his political career amid false allegations that President-elect Joe Biden won the election only because it was somehow rigged or stolen – part of an effort to delegitimize his successor.

In 2016, despite his electoral college victory, Trump entered office baselessly claiming the election had been rigged, and even set up a presidential commission, co-chaired by Vice President Pence, to examine the voter fraud he claimed had cost him the popular vote. The commission was ultimately disbanded amid accusations of false claims, and after finding no evidence of widespread voter fraud.

Now, Trump is still claiming widespread voter fraud, despite no evidence, and has refused to concede to Biden or begin the formal transition process. The delay not only threatens to undermine public trust in democratic institutions, but could also have grave national security ramifications.

On Sunday, Trump tweeted that Biden only “won because the Election was Rigged,” and called mail-in voting “a sick joke,” before backtracking less than two hours later on even that faint nod at a concession.

“RIGGED ELECTION. WE WILL WIN!” Trump wrote, in a duo of tweets. “He only won in the eyes of the FAKE NEWS MEDIA. I concede NOTHING! We have a long way to go. This was a RIGGED ELECTION!”

“The common thread is these are all attacks on objective reality and facts, whether you’re talking about rigging the election or crowd sizes of the nature of the public challenges in front of us,” said Tim O’Brien, a senior columnist for Bloomberg Opinion and a Trump biographer who is critical of the president. “It is a core operating principle of Trumpism. If you constantly attack objective reality, you are left as the only trustworthy source of information, which is one of his goals for his relationship with his supporters – that they should believe no one else but him.”

Many in Trump’s orbit say he ran for the White House wanting to see if he could win the presidency – but not actually prepared for the hard work of governing. Now, as he exits, he has largely abdicated many of his governing responsibilities.

Since the election was called for Biden, Trump has spent the past two weekends golfing at his private course in Virginia. And he has all but given up trying to manage the deadly coronavirus pandemic, which has killed more than 245,000 Americans and sickened millions more on his watch. Despite being on track to lose more than a quarter-million Americans before he leaves the White House, the president has not attended a coronavirus task force meeting in many months.

Scaramucci said Trump’s lack of vision on handling the pandemic is consistent with his overall disinterest in governing. “There’s been no formulation or strategy, whether it’s the coronavirus, the economy, our national security interests, who we are as Americans – there’s been nothing,” he said. “So now he’s leaving with no formulation or strategy.”

Scaramucci added that sometimes, amid the chaos of the Trump White House, some allies give the president the benefit of the doubt that he has a master plan, when no such grand ambition exists.

“His die-hard supporters will tell you he’s playing four-dimensional chess,” Scaramucci said, “but all of us really know he’s eating the chess pieces; he’s munching on the chess pieces.”

Tommy Vietor, a former National Security Council spokesman for Obama and co-host of “Pod Save America,” said Trump leaving office amid a swirl of mistruths is in line with his entire foray into politics.

“Trump’s entire political career is built on the racist birther lie, so it’s no surprise that he’s leaving office as a disgraced liar,” Vietor said. “The question is whether the media can turn its gaze away from him, and if the MAGA industrial complex will smell the stench of “loser” wafting off of Trump and look for new leaders.”

Trump is not the first leader whose beginnings seem to mimic their conclusions, albeit in much different ways.

In “A Thousand Days: John F. Kennedy in the White House,” historian and biographer Arthur M. Schlesinger Jr. chronicles Kennedy’s presidency, beginning with his frigid Inauguration Day during a blizzard, and culminating with a scene in late December, a month after his death, when on a similarly “fiercely cold” day the flame from his grave in Arlington National Cemetery was carried at nightfall to the Lincoln Memorial as thousands stood vigil.

“It all ended, as it began, in the cold,” Schlesinger writes.

O’Brien said that although Trump’s single term hardly evokes the beauty of Schlesinger’s prose about Kennedy’s truncated administration, there are some similarities.

“How do you accurately try to bookend the arc of a president’s administration?” O’Brien asked. “And in the modern presidency, this is not one that lends itself to poetry, romance, high-mindedness and social purpose.”

“You basically bookend it with a car crash and a stock car race, and lies and darkness,” he said.