Mob Fest: An uprising of joy and anger with a serious political message 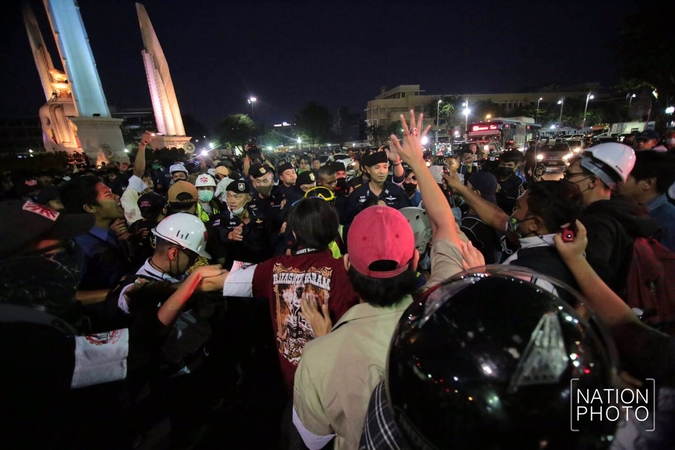 By Wichit Chaitrong
The Nation

In contrast to the national security chief’s statement that pro-democracy protests are weakening, thousands of anti-government protesters turned up for “Mob Fest” on Saturday.

On display were all the many colourful strategies that protesters have created to draw people to demonstrate against the government.

A tour of Mob Fest at Bangkok’s Democracy Monument on Saturday revealed a festival atmosphere with three main stages for political speeches and live music.

Scattered around were smaller attractions that added to the party mood. A DJ pumped out rhythms for a group of dancers. Another group showed off their synchronised moves as pop music blared. Others gathered round to watch and dance to Isaan folk music.

Headlining the festival on the main stage was Rap Against Dictatorship’s latest track, “Reform”, a blistering attack on the Thai establishment. The hip-hop outfit’s 2018 protest anthem “My Country’s Got” grabbed global headlines and nearly 100 million views on YouTube.

Dressed all in white, a male performer sat frozen like a statue. Booths invited demonstrators to create poems and artworks inspired by the protesters’ three core demands – to change the government, rewrite the Constitution and reform the monarchy.

In true music-festival style, stalls sold T-shirts, hats and other souvenirs, while hundreds of food carts served up drinks, noodles, sweets and snacks.

The “party”, held in defiance of the emergency decree banning gatherings, stretched out on the road either side of Democracy Monument.

A more serious note was struck by a booth campaigning to legalise sex work. Another promoted decriminalising marijuana use. At a third booth, guys were campaigning to lift restrictions on alcohol production, which is currently dominated by a few large firms. A small group also gathered to debate broader issues of national reform.

But the most-talked about incident at Mob Fest occurred in the afternoon when Their Majesties the King and Queen passed by in a motorcade on the other side of the road. Protesters turned their backs, sang the national anthem and raised three-finger salutes. Clips of the scene were shared widely on social media.

When night fell, protest leader Parit “Penguin” Chiwarak, out on bail, took to the stage to deliver a speech calling for monarchy reform. He also recounted the several days he spent in prison waiting for bail release.

Young monks have been calling for greater accountability and transparency in the monkhood. They also expressed support for the youth-led democracy movement.

Playful protests featuring street art, performances and other creative activities have become a popular cultural attraction in Bangkok over the past few weeks.

The events offer a joyful release for anger and tension but also pack a serious political message through debate and speeches. Taking centre stage are the youth-led democracy protesters’ three core demands for reform of Thailand’s post-coup establishment. But now climbing aboard this bandwagon are a variety of oppressed and marginalised groups, taking the chance to voice their own grievances and demands.