A guide to the 7 charter motions before Parliament this week

Parliament will begin voting on seven charter-change motions on Tuesday as Thailand reaches a crossroads in its escalating political crisis.

Former prime minister Abhisit Vejjajiva predicted last week that only some of the seven drafts would be okayed by lawmakers.

However, Parit Wacharasindhu, a former Democrat MP candidate, said Parliament could only resolve the political unrest by accepting all the draft amendments.

The first draft, proposed by the ruling parties, requires a committee of both elected and appointed members to write a new charter within 120 days, leaving Chapters 1 and 2 concerning the monarchy untouched.

The second draft, proposed by the opposition, requires an elected drafting committee to write a new charter within 240 days, leaving Chapters 1 and 2 untouched.

The third, proposed by the opposition, changes Section 270 and 271 to remove the power of senators to reform laws.

The fourth, proposed by the opposition, changes Section 272 to remove the power of senators to elect the prime minister and allow a non-MP to be a prime minister.

The fifth, proposed by the opposition, changes Section 279 to revoke the national security orders of the National Council for Peace and Order (NCPO).

The sixth, proposed by the opposition, restores the electoral system to a two-ballot vote in line with the 1997 Constitution (the so-called People’s Constitution). 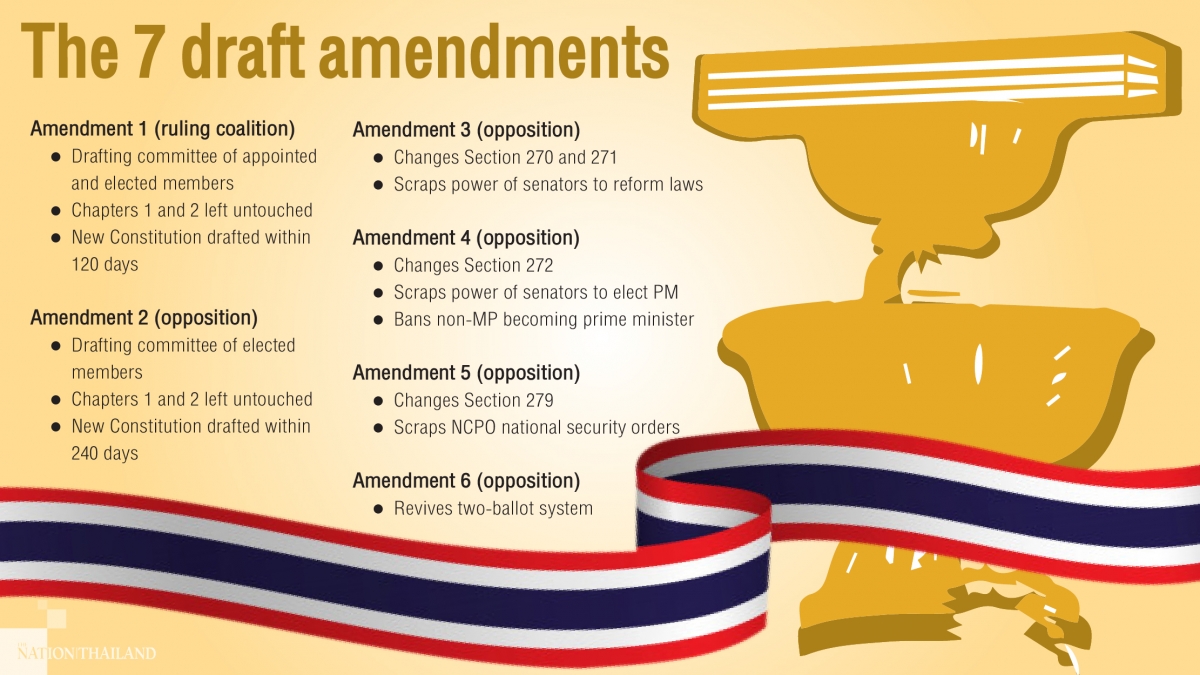 The seventh draft, written by human rights watchdog iLaw and proposed by the people, contains 10 requirements:

Allow amendment of the Constitution to be more accessible via Parliament.

Allow amendment of any chapter/section.

Cancel the national strategies to reform the country ordered by the NCPO.

Prohibit an amnesty for NCPO members.

Remove the power of senators to reform the laws.

Remove the power of senators to elect the prime minister.

Rewrite the Constitution with a fully elected drafting committee.

Seek new members for independent bodies and the Constitutional Court.