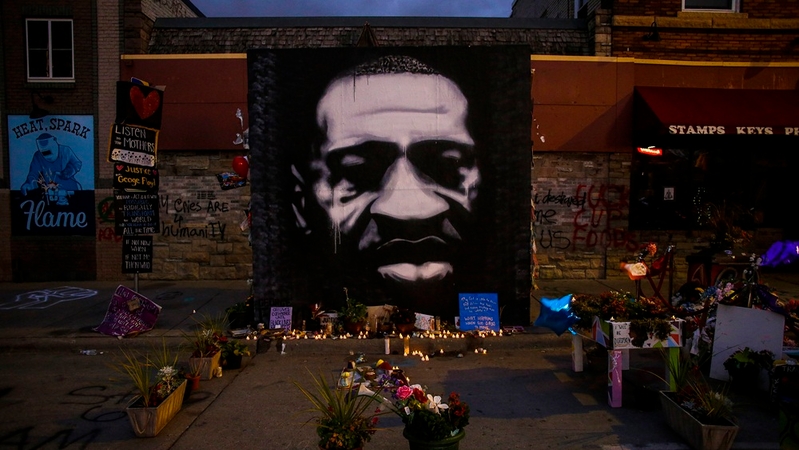 Flameless candles are illuminated after being placed at the memorial for George Floyd outside Cup Foods to celebrate what would have been Floyd’s 47th birthday on Oct. 14 in Minneapolis. MUST CREDIT: Washington Post photo by Joshua Lott.

MINNEAPOLIS – Derek Chauvin, the former Minneapolis police officer who held his knee at George Floyd’s neck for more than nine minutes and is now charged with his murder, has asked the judge in his case to block prosecutors from introducing evidence of his allegedly having used similar neck and body restraints on other suspects. Chauvin’s lawyer argues in new court documents that his “use of force” in those cases was legal and cleared by police supervisors.

Prosecutors have said they want to cite eight incidents from Chauvin’s 19-year career as a Minneapolis police officer to show a pattern of excessive force and behavior similar to the Memorial Day encounter that left Floyd dead. Prosecutors want to include four cases from 2014 to 2019 in which they claim Chauvin restrained suspects “beyond the point when such force was needed.”

In a court filing Monday, Eric Nelson, Chauvin’s attorney, asked Hennepin County District Judge Peter A. Cahill, who is overseeing the case, to block that proposed evidence, arguing that his client had used approved force and, after routine investigations, had been essentially “acquitted by MPD supervisors of applying force in a manner that was either unreasonable or unauthorized.”

Prosecutors have argued that Chauvin’s behavior while on the force is relevant because they could use it to rebut defense claims that he used “reasonable force” in restraining Floyd, who died May 25 while officers pinned him, face down and handcuffed, on a South Minneapolis street. Officers had been investigating a 911 call about a counterfeit $20 bill that had been passed at a local convenience store, and they were trying to interview Floyd and put him into a police vehicle, which Floyd resisted, saying he was afraid of being in a confined space.

During an ensuing struggle with police, Floyd was placed on the ground, where Chauvin pressed his knee into the man’s neck for more than nine minutes as Floyd repeatedly complained of struggling to breathe. Floyd ultimately lost consciousness and a pulse while restrained. He was later pronounced dead at a hospital.

One of the cases prosecutors have sought to mention at Chauvin’s trial is a July 2019 domestic disturbance incident in which a caller reported that a man had poured gasoline throughout a house and was armed with a knife. In seeking to subdue the suspect and keep him from reaching for scissors on a nearby table, Chauvin allegedly “delivered a single kick” to the man’s midsection and then applied a neck restraint, causing the man to lose consciousness.

Chauvin later told a supervisor that he realized the man had passed out and placed him in a “recovery position” until he “came to,” prosecutors said, something they say the officer did not do when Floyd complained of struggling to breathe.

In his motion to block the incident from being cited at trial, Nelson argued the case is not relevant or similar to Chauvin’s encounter with Floyd and should not be allowed as evidence.

In what appears to be a new defense argument, Nelson repeatedly claimed Chauvin did not use a neck restraint on Floyd but rather what he called “body weight control techniques.”

That is a shift from previous defense motions, in which Nelson defended how Chauvin handled Floyd by arguing that he used an approved neck restraint. In an August motion to dismiss charges, Nelson filed exhibits that included past department training materials with photos demonstrating the knee-on-neck hold similar to the one Chauvin used on Floyd and argued that his client “did exactly as he was trained to do.”

Prosecutors said in a filing Monday that they want to show the jury body-camera video of one of the incidents: a September 2017 encounter where Chauvin allegedly hit a 14-year-old boy in the head with a flashlight during a domestic assault investigation and then restrained him with a knee to the back for 17 minutes even though the child was handcuffed and complained of struggling to breathe. According to prosecutors, the boy’s mother, who had called police, repeatedly asked Chauvin to get off her son, who was bleeding from the ear and later received stitches. Prosecutors described Chauvin’s behavior as “far more violent and forceful” than his police report had implied.

Three of the incidents that prosecutors have sought to use as evidence include encounters in which Chauvin was working as an off-duty police security guard, including in February 2015, when he allegedly pushed a man against a wall and used a neck restraint before placing him in a prone position on the ground.

Prosecutors have said they want to cite that case, in part, because it “demonstrates the common method Chauvin employs when dealing with individuals larger than himself – Chauvin allegedly described the man in police records as “a large individual (with a) muscular type build.” They also said it shows Chauvin regularly used such techniques with “suspected intoxicated people who Chauvin believes are not perfectly complying with his demands.”

They wrote that the evidence shows “a repeating pattern of very similar conduct . . . and demonstrates that his use of force was not reasonable.”

Nelson defended his client’s behavior, arguing that Chauvin “was the only officer on the scene” in an incident that happened late at night and that he behaved “as his MPD training had taught him.” On this instance and the others, Nelson said prosecutors had offered no evidence that Chauvin’s actions violated department policy or the law.

Chauvin’s “modus operandi was simply that of a Minneapolis Police officer performing his duties and reacting to the circumstances,” Nelson wrote. “The state’s attempt to characterize these incidents as evidence of some kind of ill will intent or common scheme of violence that is somehow unique to Chauvin is specious, at best.”

He argued that allowing the incidents to be cited as evidence before a jury would violate Minnesota legal precedents on how past acts can and cannot be used in current cases. Nelson wrote that he believes prosecutors want to use past incidents to “illegally prove propensity,” which he argued is not allowed under state law and would be “unfairly prejudicial.”

Chauvin is facing second-degree unintentional murder and manslaughter charges, while three other officers at the scene – J. Alexander Kueng, Thomas K. Lane and Tou Thao – are charged with aiding and abetting. All four are set to be tried together in March.

In a separate motion, prosecutors asked Cahill to reconsider his recent decision to allow audio and visual coverage of the upcoming trial, which the judge said was necessary because of the anticipated need to accommodate social distancing requirements due to the ongoing covid-19 pandemic. Monday’s request did not specify a reason, but prosecutors have argued against such coverage in the past, citing concerns that it might impact court proceedings.