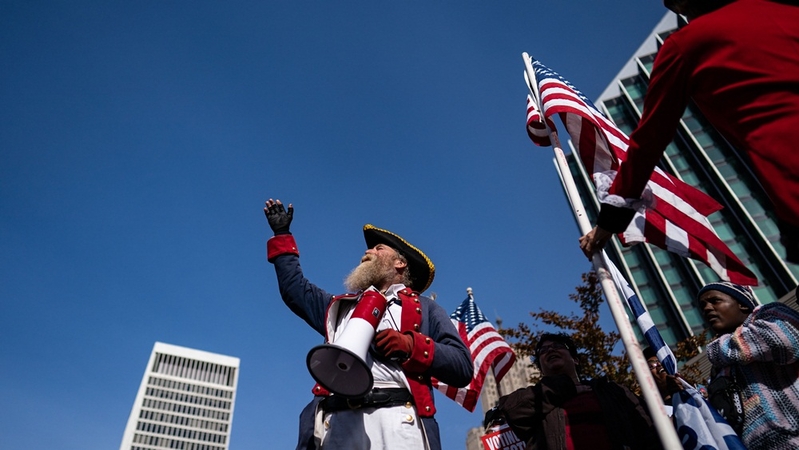 Supporters of President Trump protest the vote count outside of TFC Center where absentee ballots were counted in Detroit following Election Day. MUST CREDIT: Washington Post photo by Salwan Georges

DETROIT – In a party line vote, the Wayne County Board of Canvassers failed on Tuesday to certify its ballot count, punting the question of who won the state’s most densely populated region to a state regulatory board that meets Nov. 23.

The four-member board’s two Republicans voted against certification, while its two Democrats voted to certify the results. Joe Biden holds a lead of nearly 148,000 votes in Michigan, and Democrats here believe the partisan split of the board in Wayne County – home to heavily Democratic Detroit – simply delays an inevitable official victory for Biden in the state.

But in the short term the standoff provides a public relations advantage to the Trump campaign and a group of Republican lawyers and activists who have questioned the legitimacy of the count in Detroit, which went overwhelmingly for Biden.

The head of the Michigan GOP congratulated the board in a statement.

“I am proud that, due to the efforts of the Michigan Republican Party, the Republican National Committee and the Trump Campaign, enough evidence of irregularities and potential voter fraud was uncovered resulting in the Wayne County Board of Canvassers refusing to certify their election results. This action will allow more time for us to get to the bottom of these deeply troubling irregularities,” said Laura Cox, the state party chair. “The people of Michigan deserve fair, open and transparent elections, and we will continue to fight for just that.”

The state board – also made up of two Republicans and two Democrats – has until Dec. 13 to reach a final decision certifying the winner of the election statewide.

He said the two white Republicans on the Wayne County board “have essentially disenfranchised black voters.”

He said the Republicans on the board failed the county, state and their legal obligation. “They had a legal duty to certify,” a vote that was fair he said.

The head of the Michigan GOP congratulated the board in a statement.

“I am proud that, due to the efforts of the Michigan Republican Party, the Republican National Committee and the Trump Campaign, enough evidence of irregularities and potential voter fraud was uncovered resulting in the Wayne County Board of Canvassers refusing to certify their election results. This action will allow more time for us to get to the bottom of these deeply troubling irregularities.” Said Laura Cox, the state party chair. “The people of Michigan deserve fair, open and transparent elections, and we will continue to fight for just that.”

Democrats expressed anxiety in recent weeks that Republican legislators will seek to use a quirk in state law to appoint their own electors.

“By indulging partisan conspiracy theories and debunked claims of fraud, legislative Republicans are eroding our citizens’ faith in our democratic institutions,” Christine Greig, the Michigan House Democratic leader, said in an interview Monday. “Stubborn refusal to acknowledge the election result flies in the face of the oath that each of us swore when we assumed our offices in the Michigan Legislature. It all needs to stop.”

Because electors must be chosen by Dec. 8 under federal law, some supporters of President Donald Trump have argued that if there is no winner by that date, the legislature should try to name its own representatives to the electoral college.

At a rally outside state Capitol in Lansing on Saturday, pro-Trump activists urged the legislature to take control of the situation and select Michigan electors committed to the president.

Whether the legislature could pick its own electors is the subject of an ongoing debate among legal experts of both parties.

Last week, Republican legislative leaders in Lansing issued carefully worded statements saying that the legislature should honor the will of the voters and not play a role in selecting electors.

Key GOP leaders also backed away from a call to audit the results before certifying.

“I don’t believe that enough votes are in question in Michigan to change the outcome, so I think we need to move forward” with county and state canvassing board certification, Michigan’s Republican former secretary of state, Ruth Johnson, told The Washington Post in an interview.

Johnson, now a member of the state Senate and chair of its Elections Committee, said she still thought an audit was necessary – but that it did not need to be conducted until after the votes were certified.

But the Trump campaign is continuing to press its case to try to block certification of the vote, despite multiple legal setbacks. On Monday, Michigan’s Court of Appeals ruled against two Republican poll watchers, days after a lower court judge had rejected their request to halt certification, saying he saw no convincing evidence of election fraud at the center where workers tallied absentee ballots.

A similar suit filed by the Trump campaign in federal court Tuesday is still pending. As part of it, the campaign filed 238 pages of affidavits from Republican poll watchers across Michigan. They contained no evidence of significant fraud, but included complaints about rude behavior or unpleasant looks from poll workers or Democratic poll watchers.

“The Republican complaints smacked, as they so often do, of an anti-big-city bias,” he said.

The NAACP went to court Friday to intervene in the Trump lawsuit, calling the legal complaint “an all-out attack on votes cast by Black voters.”

Trump’s campaign has said that their lawsuits in Michigan are aimed at ensuring equal protection under the law, alleging Republicans were denied their rights.

“In this country, voting is a fundamental right and that means that there has to be uniform standards,” said White House press secretary Kayleigh McEnany, speaking in a personal capacity at a briefing earlier this month about the legal challenge.

The focus on Wayne County’s vote – which effectively put Biden over the top in Michigan – has put a spotlight on the usually anonymous officials in charge of certifying votes.

Each county board is composed of two Democrats and two Republicans, appointed by their parties for staggered four-year terms. Before they certify the results, the boards spend two weeks reviewing poll books and vote totals and resolving any discrepancies that need to be corrected. The main task: to check whether the number of votes reported by the voting machines in each precinct match the number of voters recorded in poll books.

“We’re not here to talk about the van full of ballots that showed up at 3 a.m. or whatever people are alleging happened. That’s not why we’re here. We’re here to look at those poll books,” Voorheis said.

On Friday, inside a building near the riverfront on Detroit’s east side, a handful of sheriff’s deputies were posted at the entryway screening guests for coronavirus symptoms while guarding the Wayne County Board of Canvassers office, where about a dozen workers have been stationed nearly every day since Nov. 3 working to complete the certification process.

At least a half dozen observers from both political parties, as well as independent groups such as the League of Women Voters, sat quietly at their own tables on the edge of the room with a view of the process.

At one point in the evening, sheriff’s deputies had to mediate when a brief dispute broke out after two observers tied to conservative groups, who had been taking photos of the canvassing process, lodged a complaint about a Democratic observer taking a selfie with them in the background.

The flare-up was a sign of the unusual tension that has marked this year’s canvassing process.

“I’ve been doing voter protection since 2008. I’ve never, ever seen any of this. Ever,” said Alec Gibbs, a Flint attorney who does voter protection work for the Genesee County Democratic Party. “We had no reason to believe that county canvassing boards would become flash points.”