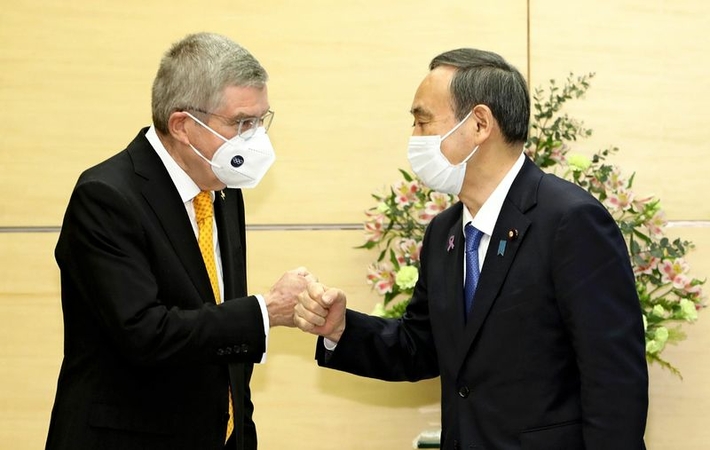 The recent visit to Japan by International Olympic Committee President Thomas Bach, his first since the postponement of the 2020 Tokyo Olympics and Paralympics, was aimed at demonstrating to the international community Bach’s continued determination to hold the events amid the global spread of the novel coronavirus.

Given that Prime Minister Yoshihide Suga also prioritizes the Games as a symbol of economic reconstruction, Japan and the IOC share a mutual interest in this regard.

After meeting with Suga on Monday, Bach expressed confidence in the success of next summer’s Olympics and Paralympics, telling reporters at the Prime Minister’s Office that they would ensure a safe environment for all participants.

The IOC president reportedly suggested to Suga that if vaccines for the coronavirus are developed, the IOC would help foreign athletes get innoculated before they come to Japan.

With the coronavirus spreading in the United States and European countries, there is growing concern about the Games among athletes, sporting organizations and sponsor companies. Amid these circumstances, Bach’s visit to Japan is widely believed to be aimed at emphasizing to the rest of the world an unwavering determination to realize the Games, according to a source close to the Japanese government.

The world wrestling championships that were scheduled to take place in Serbia in December have been canceled because not enough athletes were entered to compete.

Bach also apparently hopes to strengthen his leadership before the IOC presidential election slated for March next year, where he is aiming for a third term in office.

Just like Bach, Suga is also determined for the Olympics and Paralympics to take place. Suga has led the economic revival efforts in response to the coronavirus outbreak, and he sees holding the Games as the compilation of these measures. He wants to allow foreign spectators to enter Japan and show people both in Japan and abroad how successfully this nation has handled the virus.

The Olympics and Paralympics are also closely related to Suga’s strategy for dissolving the House of Representatives. If the timing of the election is delayed to the greatest extent possible, it will be a powerful option for Suga to dissolve the lower house after the Games conclude and thereby take advantage of the excitement they brought about.

Focus on next spring

Since September, the government has been holding meetings of a panel tasked with discussing measures against infectious disease, chaired by Deputy Chief Cabinet Secretary Kazuhiro Sugita. Their discussions are in the final stage of compiling an interim report before the end of this year.

So far, the panel has created a system under which foreign athletes participating in international competitions and other events are exempt from the 14-day self-quarantine rule after they enter Japan. It has also set up a fever outpatient clinic in the Olympic Village.

Among the spectator-related measures that are currently being discussed are allowing only foreign tourists with Olympic tickets to enter Japan and deciding upper limits on the number of spectators in accordance with regulations on large-scale events taking place in Japan.

However, as the number of people infected with the coronavirus keeps rising both domestically and internationally, discussions on spectators have stagnated, and a final policy decision is likely to be delayed until next spring. Spring is also the season when Olympic qualifying events and athletes’ preparations for the Games fully begin.

Bach told reporters Monday evening that attendance might be 100% or it might be low, that it was still too early to reach a conclusion. Adding that safety should be the top priority, Bach suggested they would make a decision based on the infection situation and other factors.