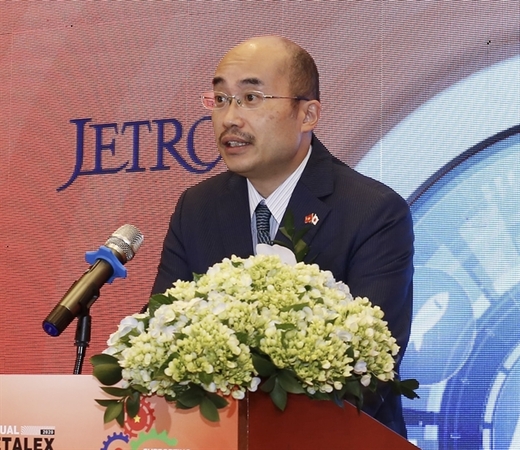 Economic and market growth potential, competitive human resources, an increase in consumption, and successful control of the COVID-19 epidemic are the factors that continue to make Việt Nam an attractive investment destination for Japanese firms.

Hirai Shinji, chief representative of the Japan Trade Promotion Organisation (JETRO) in HCM City, said there would be a fresh new wave of Japanese investment in Việt Nam, with companies investing in more sectors than in the past and no longer focusing on Hà Nội and HCM City but also investing in other places around the country.

How do you evaluate the attractiveness of the Vietnamese market for Japanese firms?

Many Japanese companies were attracted to Việt Nam before the COVID-19 epidemic.

The Vietnamese Government has achieved the twin goals of controlling the epidemic while maintaining economic growth, which has created special interest among Japanese firms in the market.

I think many Japanese companies will come to Việt Nam to seek business opportunities in future. They will study information like how the market is and whether they can get sufficient supply of locally sourced components for their needs.

Vietnamese businesses need to invest to promote themselves so that customers know what their strengths are, what technologies they can manage and how they can co-operate with partners.

How do you see the trends in investment by Japanese companies in Việt Nam in the near future?

After the visit of Japanese Prime Minister Suga Yoshihide, Japanese investment will surely continue to flow into Việt Nam. There will be two trends: firms that have been doing business in Việt Nam will invest more to expand their operation, while businesses in Japan will wait until the Covid-19 epidemic stabilises, and business-matching activities between the two countries becoming more convenient, and will come to explore investment opportunities in Việt Nam.

There are three points to be noticed in the new investment trends by Japanese enterprises.

Firstly, there will be a change in investment location. Japanese investors have so far mainly concentrated their investment in big cities like Hà Nội and HCM City and industrial parks surrounding these two cities.

However, in the new trend, besides these areas, HCM City’s neighbouring localities and Cửu Long (Mekong) Delta provinces will be new destinations for Japanese investors in the near future.

Third is developing a win-win partnership between Japanese and Vietnamese enterprises.

Over the past 25 years Japanese enterprises mainly invested in the export processing sector, importing raw materials into Việt Nam to make products for export to Japan or to a third country.

But this is gradually changing, and the priority of Japanese businesses now is to build partnerships with Vietnamese firms to develop together in line with market trends.

So I think building a sustainable partnership between the two sides in the fashion and services fields will become a trend in the coming time. By then Vietnamese enterprises will help their Japanese partners learn about the Vietnamese market, and they can also benefit from this partnership because Japanese firms have technology and distribution channels available.

With the use of digital technologies, both sides will surely have a chance to develop in these fields.

Can you elaborate on the likely investments by Japanese firms in the trading and services sectors in Việt Nam, particularly HCM City?

According to JETRO’S surveys, Japanese firms have shown great interest in the Vietnamese market, considering it a market with huge economic growth prospects.

Japanese enterprises have started to pay more attention to non-manufacturing sectors in Việt Nam, started to care what Vietnamese people like to eat and what their tastes and fashion styles are.

The HCM City market is very attractive to Japanese investors.

Uniqlo, a famous Japanese fashion retailer, opened its first store in Việt Nam last December in HCM City and continued to open its second and third stores also in the city in May and June amid the pandemic.

Japanese retail and services enterprises appreciate the purchasing power of residents in HCM City and think there are opportunities in the growing market.

What are the advantages and difficulties for Japanese enterprises in Việt Nam and what should the country do to attract investors?

This dialogue is held many times a year. At the central level, Japanese enterprises in Hà Nội have a dialogue with the Vietnamese Government in Hà Nội called the Japan-Vietnam Joint Initiative.

Infrastructure is among the things that Việt Nam needs to improve.

Cát Lái Port is considered the largest cargo port in Việt Nam in terms of the volume of goods flowing through the port. If enterprises in the southern provinces want to export, they must ship their products through the port, but with the current road network, firms encounter difficulties in transporting goods to it.

Việt Nam needs to enhance infrastructure, especially its road network, to facilitate cargo transportation to boost the economic development of HCM City and the south in general. — VNS