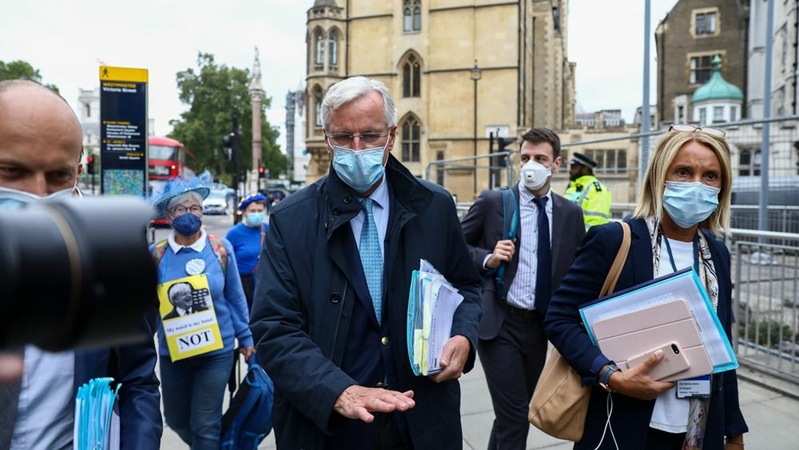 Michel Barnier, center, outside the Westminster Conference Center in London on Sept. 9, 2020. MUST CREDIT: Bloomberg photo by Simon Dawson.

Crunch talks over a post-Brexit trade agreement were disrupted on Thursday when a European Union official involved in the negotiations tested positive for the coronavirus.

Michel Barnier, the EU’s chief Brexit negotiator, will suspend talks with his U.K. counterpart David Frost “for a short period,” he said in a tweet on Thursday. He will also go into a period of quarantine, according to a person familiar with the negotiations.

The two teams will continue their work “in full respect of guidelines,” Barnier said.

Negotiators who haven’t been in contact with the official who tested positive will continue with face-to-face talks in Brussels, while others will carry on discussions virtually, said the person, who asked not to be identified because they weren’t authorized to speak publicly.

“The health of our teams comes first,” Frost said in a tweet, adding that he is in close contact with Barnier about the situation.

The pound was was little changed on the news, trading 0.4% lower against the dollar at 4:50 p.m. in Brussels.

Negotiations have been going on in Brussels since Sunday. Officials have said they are in the final stretch, with an agreement possible next week. The two sides are trying to strike an accord in time for it to be ratified before the U.K. leaves the EU’s single market and customs union at the end of the year.

Although the two sides had yet to bridge their differences on the three most difficult topics of fishing, the level playing field for businesses, and the governance of a potential trade agreement, officials had recently been relatively upbeat. Barnier was scheduled to brief EU government envoys in Brussels about the state of the talks on Friday morning. That will now be done by one of his deputies.

This isn’t the first time the coronavirus has disrupted the negotiations. In March, Barnier, Frost and several members of their teams were forced into isolation after either testing positive for, or showing symptoms of, Covid. The two sides were also forced to suspend face-to-face discussions as Europe went into a continent-wide lockdown.