Most Republicans greet Trump’s push to overturn the election with a customary response: Silence (nationthailand.com)

Most Republicans greet Trump’s push to overturn the election with a customary response: Silence 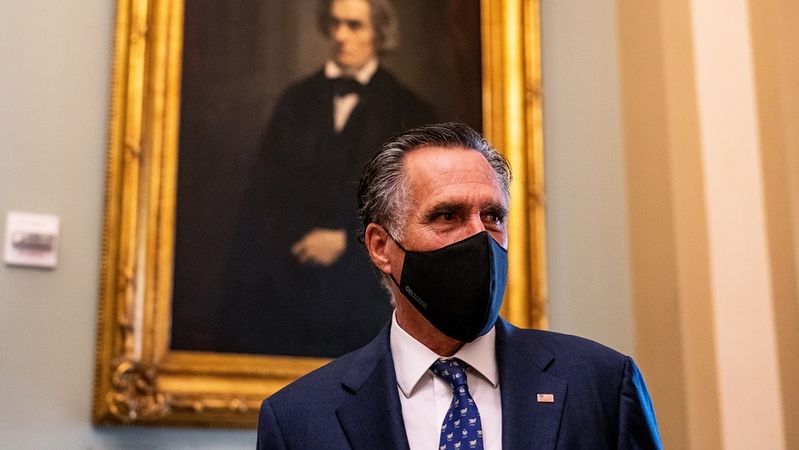 Sen. Mitt Romney speaks to reporters in the Capitol in September. MUST CREDIT: Washington Post photo by Demetrius Freeman

WASHINGTON – Three Senate Republicans have publicly criticized President Donald Trump’s effort to overturn election results in states that he lost. A couple more have acknowledged that President-elect Joe Biden is likely to be sworn in as the 46th president on Jan. 20, without addressing Trump’s actions.

The rest did what many Republicans have done for four years when faced with Trump’s brazen, sometimes outlandish actions: They said nothing, or tried to avoid the issue.

Their response, or lack of it, served to harden one of the party’s legacies of the Trump years: its complicit silence, which has not only made GOP lawmakers appear subservient to the president, but has contributed to a notable shift in the party toward conspiracy and away from facts. Only this time, their collective refusal to speak up comes at an unusually perilous moment for American democracy – as a president takes the unprecedented step of wielding the powers of his office to try to subvert the will of the voters.

The Washington Post contacted all 53 Republican U.S. senators for comments on the president’s efforts to overturn the election results, including his invitation to Michigan’s GOP legislative leaders to a meeting Friday as he tries to block the state from certifying Biden’s victory of about 150,000 votes there.

Fewer than 10 senators’ offices responded at all. Of those, most declined to comment or referred to previous remarks – in some cases remarks that predated Trump’s actions this week, including his call to a county canvassing board member in Michigan.

Sens. Susan Collins of Maine, Mitt Romney of Utah and Ben Sasse of Nebraska, each of whom has been critical of Trump in the past, were the only Republicans to tackle the president’s actions head-on.

“There is a right way and a wrong way for the incumbent President to pursue his rights to contest what he perceives as election irregularities,” Collins said in a statement. “The right way is to compile the evidence and mount legal challenges in our courts. The wrong way is to attempt to pressure state election officials.”

She added, “The states should proceed to certify their election results as scheduled.”

“Having failed to make even a plausible case of widespread fraud or conspiracy before any court of law, the President has now resorted to overt pressure on state and local officials to subvert the will of the people and overturn the election,” he said. “It is difficult to imagine a worse, more undemocratic action by a sitting American President.”

Trump, perhaps illustrating why Republicans fear his wrath, fired back in a tweet that Romney is a “RINO” – a Republican in name only – who got “slaughter[ed]” by Barack Obama.

Sasse said in a detailed statement that whenever Trump’s lawyers have had a chance to allege voter fraud in court, they have backed down “because there are legal consequences for lying to judges.” The senator singled out a Thursday news conference by Trump lawyer Rudolph W. Giuliani, calling it a farce that provided no evidence of electoral malfeasance.

“Wild news conferences erode public trust,” Sasse said. “So no, obviously Rudy and his buddies should not pressure electors to ignore their certification obligations under the statute. We are a nation of laws, not tweets.”

The Republicans’ silence underlines the extent to which Trump’s loyal supporters form a large and active part of the GOP base, making any criticism politically risky, especially given Trump’s willingness to lash out at detractors.

That has created a pattern throughout Trump’s presidency in which top Republicans stay quiet when he makes offensive statements or takes actions widely seen as objectionable. That ranges from telling lawmakers of color to “go back” to their ostensible countries to a policy of separating children at the border to a conversation with the president of Ukraine in which Trump asked for a political “favor,” leading to his impeachment.

Republicans became so used to refusing to comment on Trump’s startling tweets that then-House Speaker Paul Ryan (Wis.) joked, at an Alfred E. Smith dinner in 2017, that “every morning, I wake up in my office and scroll Twitter to see which tweets I will have to pretend that I didn’t see later.”

That pattern of willful unresponsiveness is continuing as Trump attempts to influence Republican officials in Michigan. House Republicans, like their Senate counterparts, have said little, though Rep. Fred Upton (Mich.) offered Biden congratulations and was the first House Republican to call him president-elect.

“I’ve not seen any evidence of fraud that would overturn 150,000 and some votes,” Upton said in an interview. He added, “I don’t see judges overturning the results of the certified elections. . . . No one has shown any evidence” of fraud.

In the Senate, some Republicans engaged on the matter only when asked about it during previously scheduled media appearances on other topics or happenstance run-ins with reporters in the Capitol.

Sen. Patrick Toomey (Pa.), whose aides initially pointed The Post to comments from Nov. 11, appeared on Bloomberg News on Friday to discuss the Treasury Department’s actions on an emergency loan program, but faced 30 seconds of discussion about Trump’s effort to contest the election.

Toomey reiterated his belief that Biden won his state and said administration officials should stop delaying the transition, though he stopped short of criticizing Trump.

“It’s not what I think should be happening – I think there should be a full, conventional transition underway,” Toomey said. Since it is “very likely” Biden will be the next president, he added, “why wouldn’t we go ahead and prepare for what certainly looks like the high-probability event?”

Sen. Josh Hawley (Mo.) received the inglorious task of overseeing a open-and-shut Senate session Friday, which placed him near reporters after the pro forma session concluded. He suggested he was unaware of the president’s actions, which have dominated the news.

“I haven’t followed it super closely. For instance, I know that Mayor Giuliani had a news conference yesterday. I’ve not seen it – I’ve heard about it,” Hawley told reporters, laughing a little.

Reporters described how Trump had summoned Michigan legislative leaders to a meeting and was trying to block the state from the normally perfunctory role of certifying its election results.

“I don’t have any concerns. I’m obviously not privy to the conversation, but I don’t really have concerns with him talking about the situation with elected officials,” Hawley said.

Hawley, who may run for president in 2024 as a Trump disciple, left open the idea there might be voter fraud as Trump claims, despite the lack of evidence. He even suggested Trump might end up getting a second term.

“The president has every right to see that every ballot’s counted, but they have a high bar to make,” Sullivan said. “And they’ve got to prove it in court.”

Asked whether the lawyers had cleared that high bar, Sullivan did not answer, joining the other four dozen Senate Republicans in silence.