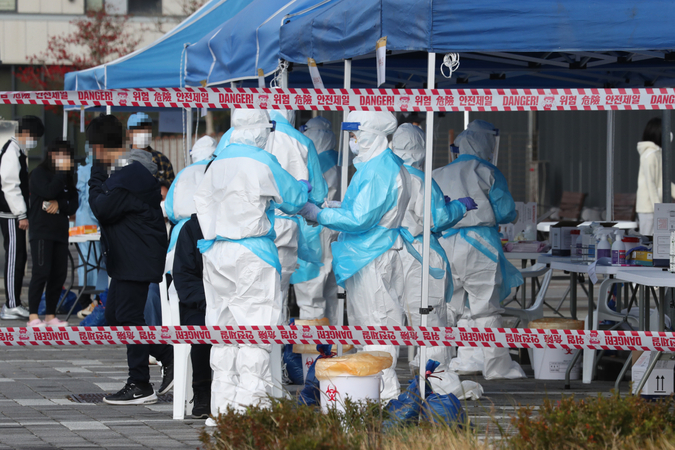 By Ock Hyun-ju
The Korea Herald/ANN

The Greater Seoul area, home to half of South Korea’s population, is considered to have entered a third wave of COVID-19 infections, health authorities said Friday, as the country’s new daily coronavirus cases topped 300 for the third consecutive day.

The country reported 363 new coronavirus cases — 320 locally transmitted and 43 imported from overseas — in the 24 hours ending Thursday at midnight, according to the Korea Disease Control and Prevention Agency.

“We see that the third wave of infections is underway, following (the first wave) in February and March and (the second wave) in August in the Greater Seoul area,” said a senior health official Yoon Tae-ho at a briefing, urging people to refrain from gatherings and outdoor activities.

To prevent another wave of virus infections, the country already raised the social distancing level in Greater Seoul by one notch to Level 1.5 under the country’s five-tier system, starting Thursday.

Yoon said the government would consider elevating the level of antivirus restrictions in Greater Seoul — Seoul, Incheon and Gyeonggi Province — to Level 2 before two weeks pass, if the seven-day daily average number of cases in the region exceeds 200 for a weeklong period. The number of daily average virus cases in the capital region was 153 in the past seven days.

Unlike in the first wave and second wave of infections earlier this year, most of which had been traced to a few clusters, the third wave is driven by multiple, sporadic clusters of infections, which complicates health authorities’ tracing and testing efforts.

“Infections have been (spreading) in our daily lives in August and September and they were slowly piling up without completely being contained, which led to clusters of infections in the current situation,” Yoon said.

Of Friday’s locally transmitted cases, the majority were in Greater Seoul — 127 in Seoul, 62 in Gyeonggi Province, which surrounds the capital, and 29 in Incheon. Outside the Seoul metropolitan area, 24 cases were reported in Gangwon Province, 18 in South Gyeongsang Province and 15 in South Chungcheong Province, as virus cases were registered in all parts of the country except for Daejeon, Ulsan and Sejong.

Out of the 43 imported cases reported Friday, 23 were detected at the border, while the other 20 were identified as the individuals were under mandatory self-quarantine in Korea. Twenty-two cases were from elsewhere in Asia, 16 from the Americas, four from Europe and one from Africa.

The number of COVID-19 patients in serious or critical condition here stood at 84, up from 79 a day earlier.

Three more people died from the virus, bringing the death toll to 501, with the overall fatality rate at 1.67 percent.

So far, of the 30,017 people confirmed to have contracted the new coronavirus here, 26,263 have been released from quarantine upon making full recoveries, up 165 from a day earlier. Some 3,253 people are receiving medical treatment under quarantine.