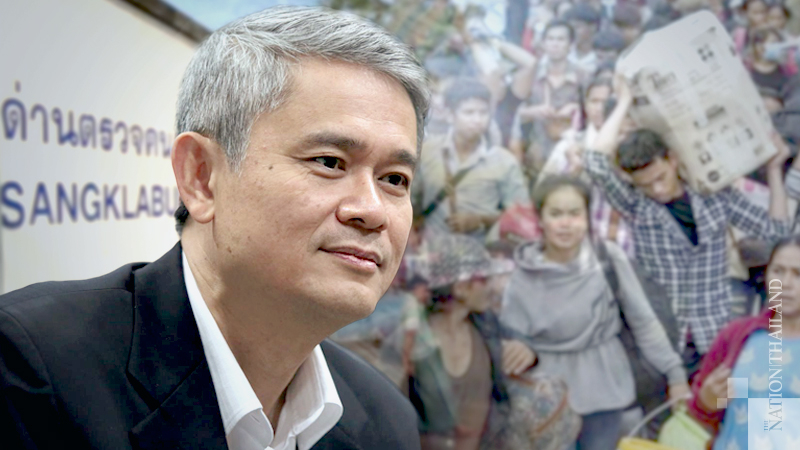 After news that Covid-19 has spread because of gambling dens and illegal migrant workers with links to gray businesses and bribery, the Anti-Corruption Organisation of Thailand (ACT) pointed out nine issues, warning that the problem is getting out of control.

ACT secretary-general Mana Nimitmongkol emphasised that the illegal labour problem is like a drug war which cannot be solved due to bribes and benefits, and the problem is getting more complicated and difficult to control.

He said illegal workers who secretly entered Thailand by land and sea are Burmese, Cambodian, Lao, Chinese, Bangladeshis, Rohingya, Indonesian and Malaysian. Many of these people are linked to foreign human trafficking and illegal labour gangs who move them to different areas of Thailand.

1. One of the illegal migrant worker groups entering the country by sea are refugees. A clear example is the Rohingya human trafficking case in 2016. These refugees viewed Thailand as a destination or a transit area.

The other group is people who seek work, and they are often found in the fishing industry. They arrive at Ranong, all the way from Malaysia, since travelling by boat requires a large number of people at a time. Therefore, it is believed that there must be management agents in the country of origin as well as in Thailand.

2. As for workers coming into the country by land, , most crossed through immigration checkpoints and possessed legal documents. A minority of them illegally entered through forests or crossed canals. This group is divided into two.

The first group crossed the border with assistance from local networks through acquaintances or relatives and normally stayed in villages along the border for two days. They later took a bus to the bus station in a big city before migrating to their destinations.

The second group entered in a cluster under contract with trafficking agents. Their place of rest or destination of work is unclear.

3. According to Labour Department statistics, as of November 2020, some 2.08 million Burmese, Cambodians, Vietnamese and Laotians registered to work, while outsiders estimate there are as many as 2 million illegal workers in the country.

4. Illegal immigrant workers pay Bt8,000 to Bt15,000 per head to “recruiters” to transport them to their destinations.

5. Hundreds of Thais fleeing drug cases have lived in Myanmar’s Tachilek district. These people also run different networks. It is said some of them are involved in transporting illegal labourers into Thailand by linking up with local networks in the kingdom.

6. Bribery is still prevalent according to information on the Internet, news reports, complaints and studies.

However, dealing in lottery, gambling, brothels and the drug trade are clearly seen as sources of bribery. Human trafficking is another major source.

7. The United States TIP Report 2020 states that applications for a work permit in Thailand are highly procedural, costly and very restrictive. The relevant documents are burdensome and cumbersome.

Mana said this reflects bureaucratic deficiency and government policies against real labour requirements of businesses, industries and services, and has become a key factor in the problem of illegal labour and human trafficking.

8. The TIP Report 2020 also indicates that Thailand has made efforts to resolve human trafficking but is still not meeting international standards. The report stated that “corruption and involvement of government officials have made the problem persist and it is an obstacle to cooperation from public organisations”.

“Corruption is a matter of the giver and the recipient benefiting, but it’s the nation that loses,” Mana said.

He suggested long-term solutions, including that the government should revise laws that are obsolete or hasten laws out of necessity in accordance with the Regulatory Guillotine programme, while government services must be reorganised.