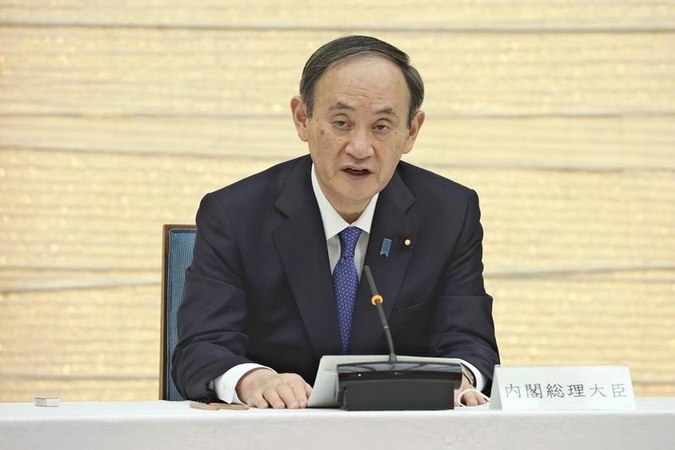 Prime Minister Yoshihide Suga declares a state of emergency in Tokyo and naighboring prefectures at the Prime Minister’s Office on Thursday. (The Yomiuri Shimbun)

Prime Minister Yoshihide Suga declared a state of emergency in Tokyo and its neighboring prefectures of Saitama, Chiba and Kanagawa early Thursday evening in response to the increase in novel coronavirus infections. Suga said the state of emergency would remain in force from Friday Jan. 8 through Feb. 7.

The prime minister urged residents in the areas covered by the state of emergency to refrain from going out after 8 p.m. if not necessary. The central government is coordinating with local governments for them to pay up to ¥60,000 per day to restaurants that close by 8 p.m., as “cooperation money” for eating establishments that accept requests to shorten their operating hours.

Yasutoshi Nishimura, the economic revitalization minister who is also in charge of the government’s COVID-19 countermeasures, said at the meeting: “We will not suspend a wide range of economic activities. Instead, we will implement effective measures for situations that have a high risk of infection, focusing on gatherings involving eating and drinking.”

The prime minister declared a state of emergency at a meeting of the government’s coronavirus task force early Thursday evening, after giving prior notice to the Diet.

A state of emergency is declared under the special measures law to cope with new strains of influenza. This is the second declaration, following the state of emergency that was in force from April 7 to May 25 last year. Last time, the Tokyo metropolitan government asked a wide range of facilities and businesses, including karaoke establishments and live music clubs, to suspend their operations. Some local governments asked elementary, junior high and high schools to close for that period.

To minimize the impact on the lives of the people and the economy, the government will not request a wide range of business suspensions and school closures this time around.

According to the draft revisions of the basic action policy, the government is calling for residents to avoid nonessential outings, particularly after 8 p.m. Restaurants will be requested to shorten their business hours and close by 8 p.m. It is also stated that alcoholic drinks should not be served after 7 p.m.

The government is considering including commercial facilities that do not sell daily necessities among those required to shorten their business hours. It also plans to revise the ordinance so that it can reveal the names of restaurants and other businesses that refuse the request for shorter business hours.

The draft also calls on companies to promote telecommuting, with the aim of reducing by 70% the number of employees at offices. The government plans to limit the attendance at sports and other events to 50% or less of capacity, and a maximum of 5,000.

Tokyo and three neighboring prefectures are currently at the highest alert level, Stage 4, for the spread of infections. The government intends to lift the declaration after the level is lowered to Stage 3.