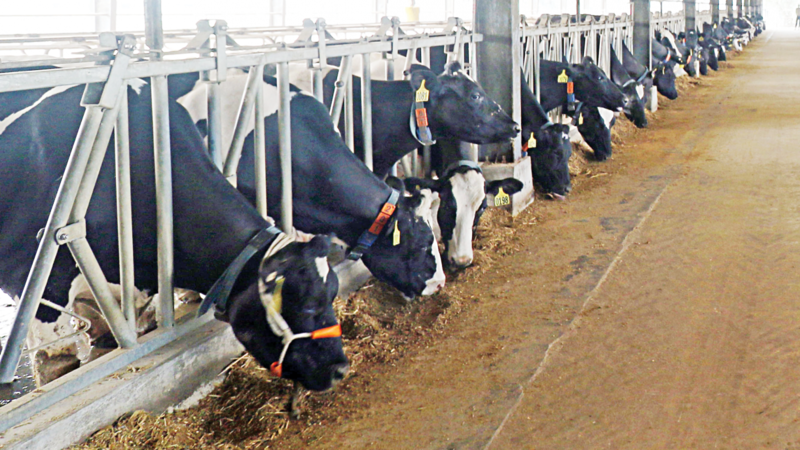 As the cowsheds were designed using a Swedish model, the animals feel more comfortable in these sheds. Photo: Star

By The Daily Star

Eon Group has established the country’s first automated dairy farm in a village of Badarganj upazila in Rangpur.

The state-of-the-art facility will mainly produce pasteurised milk alongside other milk-based products such as ghee, curd and ice cream.

He expressed deep satisfaction over the facility, which will retail products under a Barakah brand.

The dairy farm was built on 50 acres of land in Shantoshpur village at the end of 2019.

The same year, Eon Group imported 225 pregnant Holstein Friesian cows from Australia which are now being reared at the farm.

During a visit to the site on Saturday, this correspondent found the cows in several large sheds separated by gender and age.

A milk processing plant was also installed at the farm, which employs 45 people.

Dr AKM Serajul Haq, an adviser to the farm, said all aspects of the facility were fully automated, from preparing the fodder to packaging the milk.

“We are not using our hands at all in the process. The control machine runs all the steps for producing safe milk while cutting expenses,” he said.

Besides, IOT sensors have been set up on every cow to monitor their health, food intake, application of drugs and breeding as well.

The cowsheds were designed using a Swedish model. “Cows feels more comfortable in these sheds and if they are comfortable, milk production will be high,” Haq added.

A dairy farm expert from the Netherlands was also appointed.

The farm’s processing unit can separate the harmful antibiotics and aflatoxin from the milk, which will be available in 500ml and 1,000ml packs in the market.

“We are going to produce other milk-oriented products, sans milk powder, which will be marketed soon,” he said.

At present, the company’s daily production target is around 2,000 litres. However, they have been working on a plan to produce 10,000 litres of milk per day.

Around Tk, 4,000 crores are spent each year to import milk, especially the powdered one. If entrepreneurs across the country come forward, Bangladesh will be a milk exporting country and it is possible to earn huge profits from just this sector, he added.

In the last couple of years, annual milk production has gone up 10 times in the country.

There are 15,00,000 dairy farms across the country. Of them, just six were of a large scale, said Abdul Jabbar Sikdar, director-general of the Department of Livestock Services.

“Per capita milk consumption in the country rose to 175ml, around 4.5ml higher. Such a farm of a high scale would create an opportunity for locals,” he added.

Rownak Mahmud, secretary to the ministry, as a special guest, urged all ministry officials in the region to extend their support for the sector.