Read this book, Thanathorn tells children and their parents 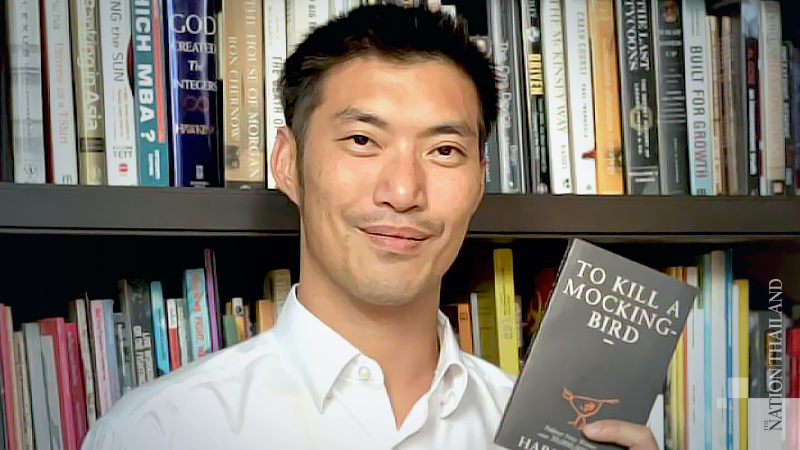 Thanathorn Juangroongruangkit shows the book, ‘To Kill a Mockingbird’, which he has recommended for reading to children and adults. Photo Credit: Thanathorn’s Facebook page.

The recommendation by Thanathorn Juangroongruangkit for children and adults to read the novel “To Kill a Mockingbird”, has drawn huge support from fans of the opposition leader, amid the lingering political divide between the younger generation and the elders.

“On the occasion of Children’s Day, I do not have a motto or adage but I would like to recommend that Thai children and their parents read the book ‘To Kill a Mockingbird’, which will cultivate fundamental values of democracy, and it serves everyone,” Thanathorn, a leader of the Progressive Movement, posted on his Facebook page on Saturday.

Thanathorn’s book recommendation comes as many pro-democracy leaders, including teenagers, have faced severe charges of sedition, lese majeste and violation of the emergency decree, a result of their participation in political rallies last year. The political divide has also affected Thai families as youths are fighting for true democracy while many of their parents still believe in conservative and authoritarian cultures.

“To Kill a Mockingbird” is a novel by American Harper Lee and published in 1960. According to Wikipedia, the book was “instantly successful, widely read in high schools and middle schools in the United States, it has become a classic of modern American literature, winning the Pulitzer Prize. The plot and characters are loosely based on Lee’s observations of her family, her neighbours and an event that occurred near her hometown of Monroeville, Alabama, in 1936, when she was ten.

“Despite dealing with the serious issues of rape and racial inequality, the novel is renowned for its warmth and humour. Atticus Finch, the narrator’s father, has served as a moral hero for many readers and as a model of integrity for lawyers. The historian Joseph Crespino explains, ‘In the twentieth century, To Kill a Mockingbird is probably the most widely read book dealing with race in America, and its main character, Atticus Finch, the most enduring fictional image of racial heroism.”

Thanathorn added that he hoped children would grow up and keep their faith in humanity. The book is translated into Thai language by Nalunta Khupt, and is priced at Bt345, according to Thanathorn.