For anti-Trump Americans, calamity spurs a muted sense of vindication 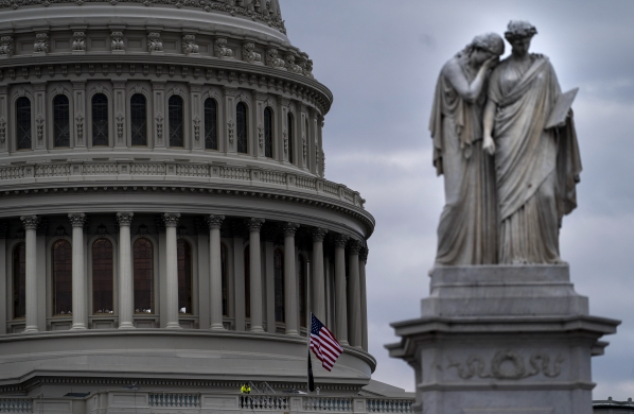 The American flag flies at half-staff at the U.S. Capitol on Jan. 8 as ordered by House Speaker Nancy Pelosi, D-Calif., in reaction to the death of Officer Brian D. Sicknick of the U.S. Capitol Police after a mob attacked the Capitol two days earlier. MUST CREDIT: Washington Post photo by Melina Mara

For the past four years, a parade of Democrats and establishment Republicans had shouted alarm about the noxious brand of politics that President Donald Trump had nurtured, saying that it would lead to potentially deadly repercussions and a political repudiation.

Pro-democracy signs line a fence near the U.S. Capitol in Washington on Jan. 9, three days after the building was invaded and vandalized by Trump-supporting rioters. MUST CREDIT: Photo for the Washington Post by Astrid Riecken

Over the course of a 24-hour period last week, both of those fearful predictions came to pass, as the worst aspects of what Trump has wrought were put on full view and he, his party and the nation faced significant consequences.

First, Republicans lost two Senate races they had been favored to win in the usually conservative state of Georgia, giving Democrats full control in Washington as Trump’s party blamed him for the losses. Next, Trump incited his supporters with false allegations about the November election and directed them to the U.S. Capitol, where the mob mounted a deadly attack on another branch of the government, and on democracy itself.

Roses are left Jan. 9 at the fence that now surrounds the U.S. Capitol building, three days after it was invaded and vandalized by Trump-supporting rioters. MUST CREDIT: Photo for the Washington Post by Astrid Riecken

It was no outside force, only the actions of Trump and his supporters, that brought on calamity. In its wake was left a shaken nation and a mix of reactions among those who had long sounded the warnings that last week became undeniable. Yet any sense of vindication was buried under the horror of Wednesday’s insurrection at the Capitol.

“It’s finally coming into focus,” said David Bowen, a Wisconsin state assemblyman and Democrat from Milwaukee. “Maybe it was blurred before. But it couldn’t be more clear at this point – even for people who supported Trump for a number of different reasons.”

Bowen found himself dejected Tuesday afternoon when the Kenosha County district attorney announced that no officers would be charged for the shooting of Jacob Blake, a 29-year-old Black man who was left paralyzed. By evening, he felt uplifted when Democrats won control of the Senate, which he hopes will allow them to address racial injustices.

The next day, some of his worst fears came true when the Capitol mob engaged in what he viewed as an attempted coup. But alongside that arose gratification in the widespread condemnation of Trump.

“To have these shifts of just raw emotions,” Bowen said. “The silver lining was that possibility we are better positioned than ever to have a Congress at the national level that will try to find some national standards around justice for Black people who are seeking change. … For Trump to proudly do nothing on these issues of justice and systemic racism – it’s all coming to a head right now, even in his last days of the presidency.”

The backlash against Trump has been swifter than after past missteps by him, giving longtime Trump opponents the sense that, finally, their warnings about the president’s toxicity have been recognized. Twitter and Facebook have banned him from their platforms, cutting off some of the social media oxygen he craves. Longtime allies, many of whom went along with Trump in sowing doubt about the election results and accommodating his coarsest moments, have abruptly shifted gears. Across the political landscape, the calculus instantly changed, as fear of crossing Trump was replaced with fear of being seen as complicit.

“Enough is enough,” Sen. Lindsey Graham, R-S.C., one of Trump’s closest allies and a frequent golfing partner of the president’s, said in the aftermath of the mob attack. “I’m out.”

Among Democrats, the emotions of last week were significantly different from November’s. Then the excitement that Biden had defeated Trump – with spontaneous dance parties breaking out in cities – was tempered by the party’s loss of seats in the House and failure to claim the Senate majority. In Georgia, neither Democrat had come close to winning outright, forcing dual runoffs that traditionally favored Republicans. It was a sobering reminder that Trump – who won 74 million votes, the second most in U.S. history behind only Biden – had a potent grip on a much larger swath of the country than many had believed.

“What really surprised me was that the public did not hold the people who enabled Trump for four years accountable,” said Will Buergey, the Democratic Party chairman in Gogebic County, Mich. “And when I initially saw Nov. 3 results out of Georgia, I was pretty pessimistic about Democrats’ chance to win.”

So the results last week were a welcome shock. Trump’s actions clearly damaged the Republican Party’s chances; his repeated criticism of Republicans over their unwillingness to go along with his false claims about a fraudulent election failed to work, with a majority of voters even in Georgia no longer willing to go along with him. Between the November election and the runoff two months later, it was the Biden-backed Democratic candidates who gained significant ground, not the Trump-backed Republican incumbents.

“I was thrilled,” Buergey said. Finally, he added, “It was a repudiation against Trump.”

Georgians also sensed repudiation in a continuation of the shifts that have happened alongside Trump’s rise or, in some cases, in direct response to it.

He sees in the elections a new Georgia, and a new America, too.

Those contests ended just as the country was gripped by the images from the U.S. Capitol, which cut short their celebrations over winning control of the Senate.

Trump’s rhetoric has always been outside the pale. He refused to fully condemn white nationalists after the deadly “Unite the Right” rally in Charlottesville, Va., in August 2017. During a presidential debate he told the Proud Boys, a male-chauvinist organization with ties to white nationalism, to “stand back and stand by.” He ridiculed NFL football players for kneeling during the national anthem as a protest of racial injustice, and he nodded to anti-Semitic tropes. As far back as the spring of 2016, an opponent – now an ally, Sen. Ted Cruz, R-Texas – said Trump “has a consistent pattern of inciting violence.”

But there were few far-reaching ramifications for Trump until recently.

“It’s been more of an eye-opener,” said Nancy Quarles, a commissioner in Oakland County, Mich., of the impact of last week. “Even people I serve with – Republicans and independents who were looking at not so much him as a person but believed in his philosophies – some of that has turned. They’re not as strongly supporting him.”

She said the week has been turbulent and, at times, felt like the country has reached an all-time low in its ability to engage in civil discourse – even as she is optimistic about news that she felt got lost: Democrats winning the Senate majority.

“I’m hopeful. And looking forward to this being over with. And moving on,” she added. “The new administration is going to have their hands full trying to repair everything. They have to pick up the pieces and put it all back together. And I don’t know how long that’s going to take.”

Trump almost certainly will retain a strong and powerful base of support, as he has after every other controversy. There were still 147 Republicans who supported objections to count Biden’s electoral college votes, even after the Capitol was attacked. Trump retains broad support among Republican National Committee members. And Ronna McDaniel, the chairwoman he installed to lead the party four years ago, was unanimously reelected Friday without a challenger.

For years, Trump has run roughshod over other Republicans using the same strongman tactics he has used in attempts to thwart Democrats. It has at time muffled his critics, but over the past few days, they, too, have grown more vocal.

Sen. Mitt Romney, R-Utah, the only Republican senator to vote to convict Trump for abuse of power at his impeachment trial, delivered a passionate speech on the Senate floor decrying Trump as “a selfish man” and last week wrote an essay urging the country to heal its “social sickness.”

Senate Majority Leader Mitch McConnell, R-Ky., who has largely appeased Trump to fulfill his goal of remaking the federal judiciary, delivered a forceful condemnation of Trump for peddling “sweeping conspiracy theories” about the election. Transportation Secretary Elaine Chao, who is McConnell’s wife, became the first Cabinet secretary to resign over the president’s role in inciting the mob to storm the Capitol.

“If there’s ever any silver lining in an awful, awful, awful day, I think it’s that this has accelerated the march away from Trumpism,” said former senator Jeff Flake, R-Ariz., who has warned his party for years about the perils of following Trump and said he had the feeling last week that, finally, more Americans might be seeing things the way he has for a long time.

“We should not have tolerated so many other elected officials amplifying the president’s falsehoods without calling that out,” Flake said. “That’s what has been frustrating and painful. And I do think it’s changed.”