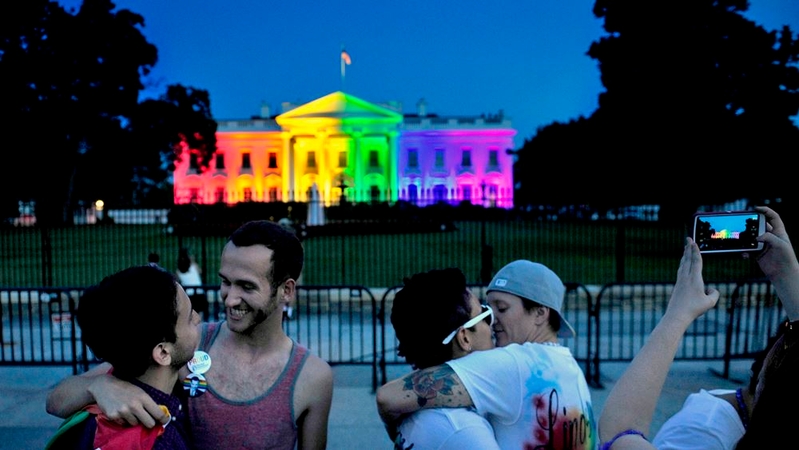 Kelly Miller, left, and her wife, Lindsey Miller, center, embrace on June 26, 2015, outside the White House, lighted in multicolored lights in recognition of the Supreme Court’s decision to legalize same-sex marriage in all 50 states. The Millers were married two years ago in Washington State, where same-sex marriage was legalized. MUST CREDIT: Washington Post photo by Michael S. Williamson

WASHINGTON – Joe Biden became a fast friend of the LGBTQ community as vice president in 2012 by stating his support for same-sex marriage in a television interview even before his boss, President Barack Obama, did.

That same year, outside an Obama-Biden campaign office in Florida, it was Biden’s unexpected support for the transgender community that elevated his status from an LGBTQ ally to a champion. When the mother of a Miss Trans New England pageant winner asked Biden if he would help transgender people, she later told reporters, Biden whispered that it was the “civil rights issue of our time.”

Since then, Biden’s views on the LGBTQ community have become clearer and louder.

When he left the vice presidency, Biden partnered with other advocates to start the As You Are campaign to advocate for families’ acceptance of their transgender children, which “dramatically improves their child’s self-esteem and decreases the likelihood they will experience depression or suicidal ideation,” the Biden Foundation was cited as saying in a 2019 announcement.

Now advocates say the 78-year-old will be the nation’s most pro-LGBTQ president ever. He and Vice President-elect Kamala D. Harris have promised an ambitious slate of actions that would go beyond reversing what LGBTQ advocates have called President Donald Trump’s “discrimination administration.”

The Trump Accountability Project, by the advocacy group GLAAD, has recorded more than 180 anti-LGBTQ statements and actions by the Trump administration and those in the president’s circle since January 2017, including a proposal that would allow homeless shelters to house transgender people according to their sex assigned at birth rather than their gender identity.

Transgender rights have become a lightning rod in the relentless culture war that has come to dominate American politics, pitting conservative Christians who want their religious views to be accommodated against liberal and secular Americans who think some of those views trample on minority groups’ rights.

Just weeks before it leaves office, the Trump administration handed out a 400-page document detailing how federal contractors and recipients of government grants can cite their religious views to refuse to provide health coverage for birth control and other reproductive care and adoption services to single people or LGBTQ couples.

Biden has called religious freedom “a fundamental American value,” but also promised to reverse Trump administration policies that are “misusing these broad exemptions.”

“Biden has made it clear that he intends to weaponize the law to crush dissent, in order to implement a far-left agenda,” said Kristen Waggoner, general counsel for Alliance Defending Freedom, a conservative legal organization that says it protects religious and moral convictions and freedom of speech. “That impacts not just people of faith, but all Americans who want to live life according to their convictions. The government can’t engage in religious bigotry.”

“We live in a pluralistic society,” Waggoner said. “The government should not single out and punish those who believe that the best home for a child includes a married father and a mother.”

A judge recently sent the case back to a lower court, ruling that it should be allowed to continue its faith-based approach to adoption as the case proceeds, a move Waggoner cited as a win for religious liberty.

Biden has said he will protect the rights of anyone who qualifies to adopt, regardless of religion or family composition. Biden, who is Catholic, has split from his church’s stance on some issues, saying he values “the dignity of every person.”

During a town hall meeting with voters, Biden surprised even longtime LGBTQ advocates when he addressed the killing of transgender women – largely of color. At least 43 transgender or gender-nonconforming people were killed in the United States in 2020, according to the Human Rights Campaign. Advocates praised Biden for bringing the issue to the national stage and vowing to direct federal resources to prevent and prosecute such homicides.

“There’s an opportunity here for a national discussion on transgender people of color who are often just left out of the national conversation,” said David J. Johns, executive director of the National Black Justice Coalition, a civil rights organization dedicated to the Black LGBTQ community. “Even though the transgender community may have more visibility in TV shows like ‘Pose,’ the vitriol at the policy level that exists within the system leaves no promise of justice.”

“That way they can show up and craft policy which will ensure that people of color can raise the alarm about issues of mental health, safety, housing or dealing with police in their communities,” he said.

Biden has promised that his administration will “look like America,” and has said he will provide anti-bias training for federal employees and offer incentives for states that adopt programs that help prepare transgender people for the workplace.

But he could face his most laborious hurdle in passing the Equality Act, a package of measures that protect against discrimination on the basis of sexual orientation that was passed by the House in 2019 but blocked by the Republican-led Senate.

That act – which Biden has pledged to make a policy priority during his first 100 days in office – has been a cornerstone of the community’s fight for equal rights in housing and employment since it was first discussed after the Stonewall riots in 1969.

If Republicans retain control of the Senate, the legislation’s passage will remain unpredictable. Some Republicans have instead backed the Fairness for All Act, which provides some LGBTQ protections while also granting certain exceptions for religious institutions and organizations.

Much of the battle over LGBTQ rights has been happening in statehouses, where those issues have been lightning rods in the nation’s culture war. This has kept policy debates about restroom access and puberty blockers largely beyond the reach of the federal government, but the rhetoric coming out of the White House does have influence, said Drew Anderson, a longtime LGBTQ advocate who used to work with GLAAD.

“It always helps to have an LGBTQ ally in the White House who will call it for what it is: hatred for an everyday American,” Anderson said.

Biden has credited his passion for LGBTQ issues to his late son Beau Biden’s close friendship with Sarah McBride, who is transgender.

McBride worked on Beau Biden’s reelection campaign for attorney general in Delaware, where they later collaborated to pass protections for transgender people in housing, health insurance and employment.

The Biden family developed a close relationship with McBride after Beau Biden died of brain cancer in 2015. McBride’s husband, Andy Cray, had died of cancer the year before.

“The president-elect has always been far out ahead on transgender issues. And I think all of us benefit from knowing people who are trans and organic agents of change in daily life,” said McBride, who was elected in Delaware in November as the first openly transgender state senator in the country. “But I know Joe Biden also wants to honor and carry forward his son’s work and legacy on this issue.”

Joe Biden wrote the foreword for McBride’s book “Tomorrow Will Be Different: Love, Loss and the Fight for Trans Equality.”

In it, he calls transgender equality “the civil rights issue of our time.”