India kicks off vaccination of its massive population 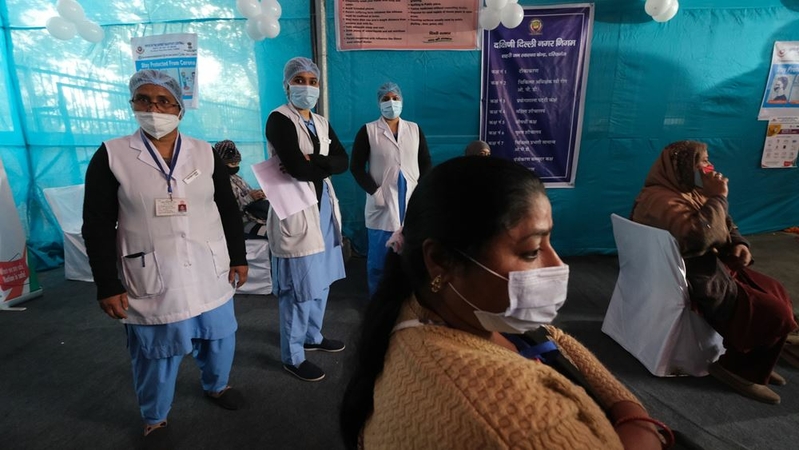 Health workers stand next to volunteers during a nationwide trial of a covid-19 vaccine delivery system at a vaccination center in New Delhi on Jan. 2, 2021. MUST CREDIT: Bloomberg photo by T. Narayan

India has kicked off one of the world’s biggest inoculation programs that will be a crucial test of how quickly developing countries, with limited health and transportation infrastructure, can protect their populations against covid-19.

Refrigerated trucks and private planes, accompanied by police officers, fanned out Tuesday from the western city of Pune to around 60 different locations across India as hundreds of thousands of medical workers are on standby to start vaccinations this weekend.

With a protracted back-and-forth over a supply deal resolved, doses that had been sitting in storage at Serum Institute of India Ltd. started going out to government depots and then beyond to hospital and health centers in cities and the hinterland.

The administration of Prime Minister Narendra Modi faces the daunting task of rolling out shots at an accelerated pace in a country of more than 1.3 billion people which has long struggled with limited health infrastructure and patchy cold-chain storage facilities. The country has so far reported nearly 10.5 million infections as of Tuesday and 151,000 deaths.

Serum, the company enlisted to manufacture a billion doses of AstraZeneca Plc’s Covid-19 vaccine has started shipments after it received orders from the Indian government for 11 million shots priced at around $2.86 (200 rupees) plus taxes a dose, Rajesh Bhushan, secretary at India’s federal health ministry told reporters at a briefing in New Delhi Tuesday.

The Pune-based company — the world’s largest vaccine manufacturer by volume — began distribution Tuesday using its own refrigerated trucks for initial batches to load it on to private airlines. The delivery of the first batch of vaccines will be completed by Thursday, Bhushan said.

The government has designated four main distribution points — Karnal, Mumbai, Chennai and Kolkata — and there are 37 state vaccine storage areas in the country but few details have been made available about where and to whom the first shots will be administered on Saturday.

Plans drawn up by India’s health ministry outline broad steps to inoculate 300 million people in the first stage through August.In a first round 30 million health care and front line workers — such as police and defense force staff — will be vaccinated, with the federal government picking up the tab, Modi said on Monday.

In the second round, about 270 million people of above 50 years of age and those at particular risk to Covid will receive shots.

There is no information on when and at what price Serum can start selling it shots privately.

New Delhi will purchase 5.5 million shots of Covaxin, the indigenous vaccine being produced by Bharat Biotech International Ltd, Bhushan said, adding that some 3.85 million doses will be purchased at around 295 rupees per dose while the rest will be provided at no cost by the company.

To transport the vaccines, Serum is using the Mumbai-based Kool-ex Cold Chain Ltd., which is moving shots from it’s manufacturing facility in Pune to the government depots equipped to handle and store vaccines, Kunal Agarwal, a director at the company, told Bloomberg.

Kool-ex, which has been transporting vaccines for a decade, deployed 400 GPS-enabled refrigerated trucks to move the shots and can add another 500 at a short notice, Agarwal said, adding that it was dispatching six to ten trucks to Serum on Tuesday. There’s a “lot of security” stationed for the trucks, he said, adding that empty trucks are being accompanied by police.

The company is informed of destination points only after the trucks have been loaded, sealed and have undergone temperature checks. Kool-ex has so far not signed new contracts with vaccine manufacturers for the distribution of Covid-19 shots and its existing long-term contracts will cover this without any changes in the pricing, Agarwal said.

It expects to start dispatching vaccines from Bharat Biotech around March or April followed by a candidate from Zydus Cadilla, another company producing an indigenous shot.

Airlines will then move the vaccines widely across the country. SpiceJet Ltd. said on Tuesday that it carried India’s first consignment of 34 boxes of Serum’s vaccine from Pune to Delhi. The private airline will be carrying multiple consignments to different Indian cities, including Guwahati, Kolkata, Hyderabad, Bhubaneswar, Bengaluru, Patna and Vijayawada through the day, the carrier’s Chairman Ajay Singh said in a statement.

More than 61,000 program managers, 200,000 vaccinators and 370,000 other vaccination team members have been trained at states to carry out the exercise, according to the government.

Mumbai, India’s financial hub which has been particularly hit by the coronavirus, will be among the first to start giving shots at around eight government hospitals. Surrounding Maharashtra state plans to vaccinate 50,000 health workers on Saturday and cover 800,000 others over the next two months with around 1.8 million doses, according to local media.

While the government is optimistic about its inoculation drive it will be held back by production constraints and the fact the program will heavily rely on state governments whose capacities and expertise vary widely, Akhil Bery, Scott Rosenstein and Peter Mumford, analysts at Eurasia Group, said in a note on Jan. 11.

A successful vaccination drive is important for Modi “who is under pressure from ongoing farmer protests,” the note added.