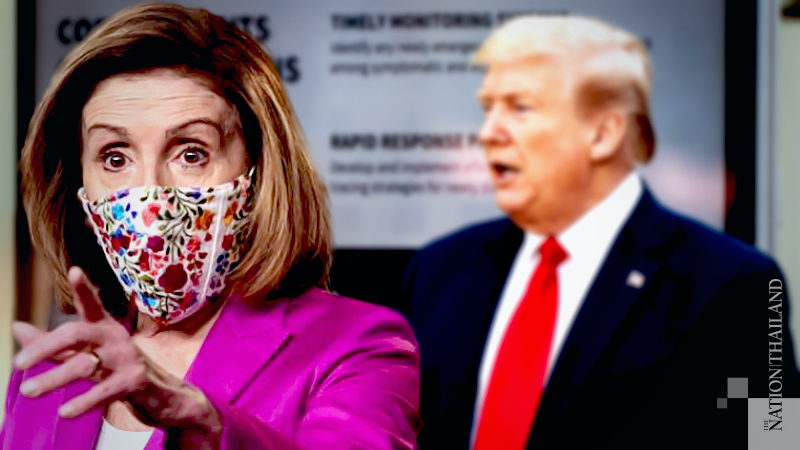 WASHINGTON – The House made history Wednesday by impeaching a president for a second time, indicting President Donald Trump a week before he leaves office for inciting a riot with false claims of a stolen election that led to the storming of the Capitol and five deaths.

Unlike Trump’s first impeachment, which proceeded with almost no GOP support, Wednesday’s effort attracted 10 Republicans, including Rep. Liz Cheney, the No. 3 party leader in the House. The Senate now appears likely to hold a trial after Trump’s departure, an unprecedented scenario that could end with lawmakers barring him from holding the presidency again.

One of the final dramas of a tumultuous presidency, the impeachment unfolded against the backdrop of near-chaos in the House and uncertainty about where Trump’s exit leaves the GOP. Democrats and Republicans exchanged accusations and name-calling throughout the day, while Trump loyalists were livid at fellow Republicans who broke ranks – especially Cheney – leaving the party’s leadership shaken.

But despite the emotions stirred by the Capitol assault, the great majority of Republicans stood by the president, including Minority Leader Kevin McCarthy, R-Calif.. He argued on the House floor that while Trump bears responsibility for the attack on the Capitol, the snap impeachment would only “further fan the flames of partisan division.”

McCarthy for the first time publicly endorsed a censure for Trump, but the call came too late to serve as an effective alternative to impeachment.

House Speaker Nancy Pelosi, D-Calif., and other Democrats made it clear Wednesday that censure would not suffice given the circumstances, with Trump riling up his supporters with false claims of election fraud, then urging them to march on Congress as it was certifying President-elect Joe Biden’s victory.

“He must go,” Pelosi said. “He is a clear and present danger to the nation that we all love.”

The House took its final vote Wednesday afternoon, one week after the riot and just two days after the impeachment resolution was filed. It was a stunningly swift response from a House that took nearly three months to impeach Trump in 2019 on charges of abuse of power and contempt of Congress.

But with just seven days remaining in Trump’s term, it became increasingly certain Wednesday that Trump would not be removed from office prematurely. The impeachment resolution for “incitement of insurrection,” however, also seeks Trump’s future “disqualification to hold and enjoy any office of honor, trust, or profit under the United States.”

The focus will now turn to how the trial will unfold in the Senate, which has never before held an impeachment trial for a former president.

Biden issued a statement shortly after the House vote signaling his concern that his agenda not be sidelined.

“I hope that the Senate leadership will find a way to deal with their constitutional responsibilities on impeachment while also working on the other urgent business of this nation,” Biden said.

Senate Majority Leader Mitch McConnell, R-Ky., refused a request from Minority Leader Charles Schumer, D-N.Y., to reconvene the Senate early to launch Trump’s trial. That means it can start the proceedings no sooner than Jan. 19 – a day before Biden’s inauguration.

McConnell, who signaled through advisers Tuesday that he would be open to a possible conviction, said in a memo released as the House debated that there was no chance that a trial could be fairly concluded before the inauguration, even if he agreed to Schumer’s request. Previous presidential impeachment trials, he noted, took 83, 37 and 21 days.

McConnell pointedly left open the possibility that he might vote to convict Trump.

“I have not made a final decision on how I will vote and I intend to listen to the legal arguments when they are presented to the Senate,” he said in the note, first sent to his fellow Republican senators.

McCarthy called on the House floor for Trump to “quell the brewing unrest,” and with Republican votes in the balance, Trump quickly issued a brief written statement: “I urge that there must be NO violence, NO lawbreaking and NO vandalism of any kind,” he said. “That is not what I stand for, and it is not what America stands for. I call on ALL Americans to help ease tensions and calm tempers.”

Later Wednesday evening, Trump issued a five-minute video denouncing the protesters: “Mob violence goes against everything I believe in, and everything our movement stands for. No true supporter of mine could ever endorse political violence.”

But the statements came too late for the clutch of Republicans who voted to impeach. Instead, several cited his impromptu remarks the previous day claiming his actions had been “totally appropriate.”

The Republicans who broke from Trump included senior leaders such as Cheney, the Republican conference chairwoman; Rep. John Katko of New York, the top GOP member of the Homeland Security Committee; and Rep. Fred Upton of Michigan, a former chairman of the Energy and Commerce Committee. But junior members such as freshman Rep. Peter Meijer of Michigan and second-term Rep. Anthony Gonzalez of Ohio also voted for impeachment.

Some, such as Rep. Adam Kinzinger of Illinois, have been sharply critical of Trump in the past. Others, such as Rep. Tom Rice of South Carolina, have hardly ever said a cross word about him.

“I have backed this President through thick and thin for four years. I campaigned for him and voted for him twice,” Rice said in a statement. “But, this utter failure is inexcusable.”

Other Republicans voting to impeach Trump were Reps. Jaime Herrera Beutler of Washington, Dan Newhouse of Washington and David Valadao of California.

Rep. Jim Jordan, R-Ohio, one of Trump’s staunchest defenders, said the fact that only nine Republicans joined Cheney, and the dam did not break in a more dramatic way, showed that Trump retained wide support within the GOP.

Asked if Trump could still be an effective leader of the party, Jordan said, “Of course he is. Of course he is. His support is strong because the American people appreciated that over the past four years he did more of what he said he would do than any president in my lifetime.”

Several other Republicans declined to comment on Trump’s future, saying instead that the lopsided GOP vote reflected concerns about the impeachment process and the political environment.

“It actually represents a feeling among Republicans – even Republicans who are disappointed with this president – that with only seven days left to go in his term and with the toxic political environment being what it is, that there’s a real need in the country to lower the temperature,” said Rep. Garland “Andy” Barr, R-Ky. “This is viewed by a lot of Americans as an act of political vengeance.”

Many GOP members said they were struggling to reconcile their anger at last week’s events, and Trump’s culpability in them, with their fears of escalating violence and threats directed at lawmakers.

“This isn’t a fun time, that’s for sure,” said Valadao, who said he was undecided just hours before voting to impeach.

Democrats encouraged the handful of Republicans who came to the floor Wednesday in support of impeachment. When Newhouse broke publicly with Trump on the House floor, colleagues across the aisle delivered applause.

“These articles of impeachment are flawed, but I will not use process as an excuse,” he said. “There is no excuse for President Trump’s actions.”

But most Republicans speaking Wednesday put little distance between themselves and Trump. Many sidestepped the actual charge against Trump, instead arguing that the Democrats were being divisive and that impeachment was unnecessary so close to Trump’s departure.

Rep. Andy Biggs, R-Ariz., leader of the pro-Trump House Freedom Caucus who had embraced the “Stop the Steal” effort that culminated in the Jan. 6 rally, warned Democrats that they would only embolden Trump supporters.

“You believe that your hunger will be finally satiated by impeaching this president without completion of his full term of office,” Biggs said. “Instead of stopping the Trump train, his movement will grow stronger, for you will have made him a martyr.”

The scene in the Capitol highlighted how fluid the political landscape has become one week before the departure of a president who has aggressively shaken up politics for four years. Cheney and Jordan were emerging as leaders of what are roughly anti- and pro-Trump factions of the GOP, with the party’s nominal leader, McCarthy, somewhere in the middle.

Democrats, meanwhile, face what is likely to be Pelosi’s last term as speaker without a clear successor and with the narrowest congressional majority in decades – often a recipe for trouble as voters’ expectations exceed a party’s ability to deliver.

In a sign of the House GOP’s tenuous political standing, McCarthy convened a call about two hours after the vote with his top financial donors. A slew of Fortune 500 companies in recent days have sworn off donations to the Republicans who voted to overturn the electoral college results, a group that includes McCarthy.

McCarthy told the donors that he called Biden on Tuesday and “pledged to work together” with the new administration, according to a participant in the call, who spoke on the condition of anonymity to discuss the private call.

McCarthy also tried to reassure the wealthy contributors that he rejected the conspiracy theory that antifa was responsible for last week’s violence and said Trump deserved “some of the responsibility” for the attacks.

The most immediate fallout from the impeachment effort appears likely to occur inside the Republican Party, as several Trump loyalists called for Cheney to immediately resign her leadership position. A petition for her resignation circulated among GOP offices in the Capitol as hard-right members seethed over her role in backing Trump’s ouster.

Cheney on Wednesday insisted she would not resign: “I’m not going anywhere,” she told reporters. “Our nation is facing an unprecedented, since the Civil War, constitutional crisis. That’s what we need to be focused on.”

Democrats, meanwhile, prepared for a new governing reality – with Biden assuming the presidency in a week and Democrats taking the narrowest of Senate majorities, with Vice President-elect Kamala Harris poised to break 50-50 ties.

With some Democrats openly floating a delay in transmission of the impeachment measure to allow the Senate to confirm at least some of Biden’s Cabinet nominees, Pelosi on Wednesday did not respond to questions about her plans.

Some Republicans predicted that their internal bloodletting over Trump would soon be swept aside once Democrats take unified control in Washington.

“We’re going to get through this, and we’re going to be united, because Speaker Pelosi is going to bring some very dangerous policy to the House floor that’s frankly going to divide them and unite us,” said Rep. Richard Hudson, R-N.C., a junior member of the party leadership.