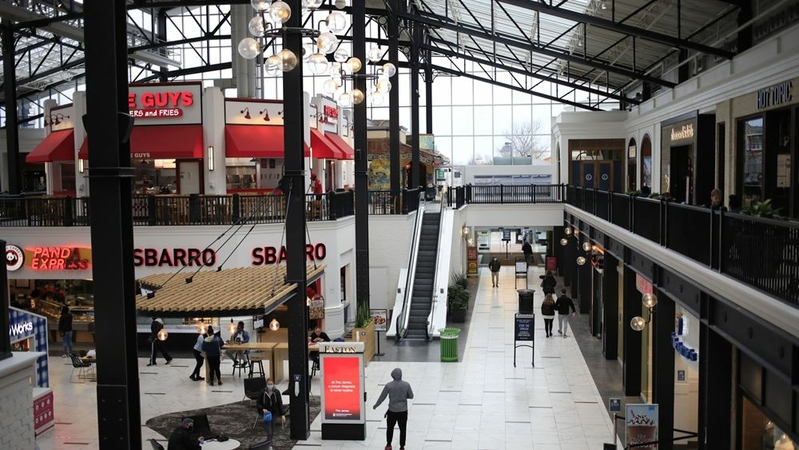 Shoppers walk through the Easton Town Center Mall in Columbus, Ohio, on Jan. 7, 2021. MUST CREDIT: Bloomberg photo by Luke Sharrett.

A key measure of prices paid by U.S. consumers cooled in December from a month earlier as slack in the labor market and muted demand helped keep inflation pressures tame.

The core consumer price index, which excludes volatile food and energy costs, increased 0.1% from the prior month after a 0.2% gain in November, a Labor Department report showed Wednesday. Compared with a year earlier, the core CPI rose 1.6%.

Buoyed by higher gasoline prices, the broader CPI advanced 0.4% from a month earlier and 1.4% from December 2019. Both the core and overall CPI month-over-month increases matched the median estimates in a Bloomberg survey of economists.

The S&P 500 was little changed in early trading, the yield on the 10-year Treasury note eased and the dollar was slightly firmer.

The report shows inflation remains well below the Federal Reserve’s goal and reflects an economy still grappling for momentum amid a resurgent pandemic. At the same time, demand is gradually picking up for some industries, while widespread vaccinations and additional fiscal stimulus have the potential of generating some pricing power in the coming months.

Most economists — and the Fed — expect inflation to remain relatively tame this year, though inflation expectations among market participants have steadily crept higher.

Proponents argue additional stimulus and pent-up consumer demand for goods and services in industries most impacted by the coronavirus will help drive up prices. Conversely, many economists argue any potential acceleration in the coming months will likely prove temporary amid a gradually recovering job market.

As for the Fed, policy makers have signaled they plan to keep interest rates near zero for quite some time. And even if price pressures build, the central bank’s new inflation target allows for periods when inflation can moderately overshoot 2% — as measured by the Commerce Department’s personal consumption expenditures price index.

However, the path of U.S. inflation metrics could have an impact on the trajectory of monetary policy.

Highlights from the report:

– Gasoline prices jumped 8.4%, most since June, accounting for more than 60% of the increase in overall CPI.

– Food costs rose 0.4%, also the most since June, after a 0.1% decrease a month earlier, reflecting higher prices for groceries and meals out.

– Rent of primary residence rose 2.3% from December 2019, the smallest advance since September 2011.

– Prices of apparel rose 1.4%, the most since June; used-vehicle costs dropped for a third month, though were up 10% from December 2019.