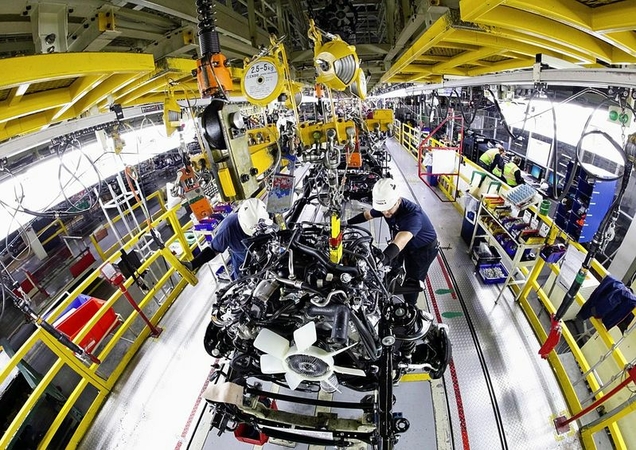 A shortage of semiconductors is forcing the world’s major automakers to cut production across the board. This is because demand for the devices mainly used in PCs and smartphones, has increased rapidly amid the novel coronavirus crisis.

The impact could last several months, putting a damper on not only the recovery of automobile production, but could also hurt business performance.

■ Cuts around the world

Honda Motor Co. has plans to cut production of five of its models, including its main sedan Accord, at its five plants in the United States and Canada beginning this week. This month, the Suzuka Factory in Mie Prefecture is also set to produce about 4,000 fewer compact cars units, such as the Fit, than planned. These measures are the result of both a shortage of semiconductors used to control the cars and an inability to procure the necessary parts.

Toyota Motor Corp. has also temporarily halted the production of some of its lines at plants in China and intends to reduce pickup truck production at its U.S. plant in Texas. Nissan Motor Co. has begun production adjustments of its Note compact car at its Oppama plant in Kanagawa Prefecture, while Subaru Corp. is considering doing the same at its plant in Gunma Prefecture.

Among European and U.S. automakers, Volkswagen AG (VW) has plans to from January to March reduce production at its bases in the U.S., Europe and China. Production cuts are expected to be on the scale of 100,000 units, an about 1% equivalent of the group’s global production volume — about 10.97 million units — in 2019. Ford Motor Co. of the U.S., Fiat Chrysler Automobiles (FCA) of the U.S. and Europe, Daimler AG of Germany, and Renault S.A. of France have also either begun reducing their production or are considering doing so in the future.

Semiconductors, which control electric current and voltage, are also known as the “rice of the industry,” as they are incorporated into many different products and components. An average gasoline-powered car is equipped with about 30 of them, and they operate a wide range of components such as power steering, air conditioners, airbags, car navigation systems, and window opening mechanisms. Electric vehicles and luxury cars, which feature more complex electrical systems, require around 80 of them. No car can be produced without them.

The growing scarcity stems from a rapid fluctuation in automobile demand. According to the International Organization of Motor Vehicle Manufacturers, global production volume during the period of January-June 2020 was about 31 million units, down about 30% from the same period in 2019 because of the pandemic. It has been on a recovery track since summer 2020, when semiconductor companies had already boosted production for PCs and smartphones, which saw a rise in demand as people refrained from leaving home. Production capacities for automobiles shrank, and the shortage suddenly become apparent.

According to sources including the World Semiconductor Trade Statistics, the global semiconductor market is worth about $412.3 billion (about ¥43 trillion), of which only about 10% is for automobiles. Because of industrial structure, if demand for PCs and smartphones — which account for the majority of the market — expands, it is likely to affect automobile production trends.

A massive fire that broke out at a plant involved in the semiconductor business in October 2020 dealt a further blow to the industry. The plant, a subsidiary of Asahi Kasei Corp., is located in Nobeoka, Miyazaki Prefecture.

According to some Japanese automakers, this could affect part inventories from March onward. Kazuhiro Sugiyama of Omdia, a British research firm, believes that “the delay in parts supply caused by the series of semiconductor shortages will continue for about six months.”

The strong sales of electric vehicles, which are equipped with a large number of semiconductors, in Europe, where strict environmental regulations are in place, are also tightening the current supply and demand situation. The automotive industry, which employs about 5.5 million people in Japan, involves many businesses, and the production cutback will have a ripple effect on not only parts manufacturers but also materials industries such as steel and chemicals. If the scale of production cutback per automaker remains at less than 10,000 units, it will have a little effect on the financial result of the company, according to an official in the industry. However, if the cutback continues for several months, the overall economy and the employment situation could also be affected.