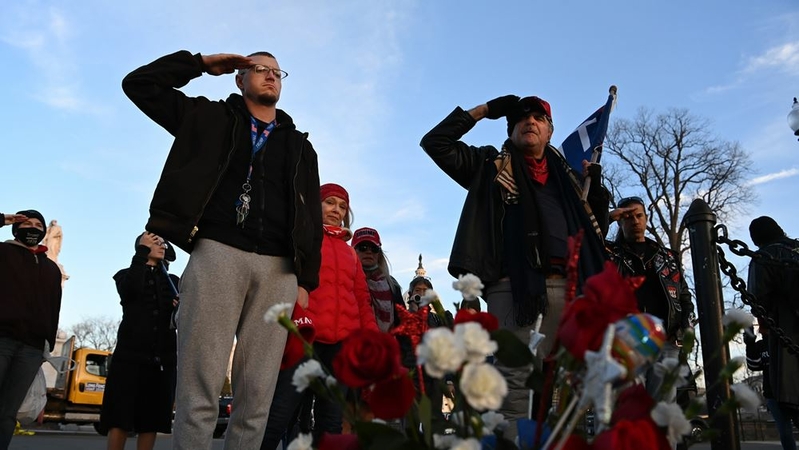 Tony Naples, left, and Gary Phaneuf salute at a memorial for Ashli Babbitt on Jan. 7, 2021, in Washington. Babbitt was shot and killed during the riot at the Capitol the day prior. MUST CREDIT: Washington Post photo by Matt McClain

WASHINGTON – Federal prosecutors have arrested a Kentucky man who they say was part of a violent crowd that stormed the House Speaker’s Lobby during the breach of the U.S. Capitol, smashing a window with a flagpole moments before a woman was fatally shot, court filings show.

An FBI charging affidavit alleges that Chad Barrett Jones is the man shown in video at Ashli Babbitt’s left on Jan. 6, wearing a red-hooded jacket and gray skullcap and striking the lobby door’s glass panels as a mob chanted “Break it down!” and “Let’s f—–g go!”

Jones allegedly used a flagpole to break the glass, the affidavit says.

Seconds later, Babbitt, 35, an Air Force veteran from Southern California, was shot by a police officer as she tried to enter the lobby, an inner sanctum that leads to the House floor. Hers is one of five deaths linked to the riot, which was carried out by supporters of President Donald Trump who wanted to stop Congress from certifying President-elect Joe Biden’s election victory.

District of Columbia police and U.S. Capitol Police are investigating the shooting of Babbitt, and the officer involved has been placed on administrative leave. Acting U.S. attorney Michael Sherwin of Washington has said investigators are probing all aspects of the shooting of Babbitt, including whether the officer, whose name has not been released, used excessive force. They are also examining whether the shooting was foreseeable and occurred during felonies committed by others, in which case those individuals could face felony murder charges.

Dozens of people have been arrested for their roles in the Jan. 6 riot. On Sunday, Capitol Police arrested Couy Griffin, a county commissioner in Otero County, N.M., who heads a group called Cowboys for Trump and has spoken openly about his involvement in the storming of the Capitol.

Images from a Facebook video that Griffin posted shows that he was within the restricted area of the building, the FBI said in an affidavit. In the video, on the Cowboys for Trump Facebook page, Griffin said he had “climbed up on the top of the Capitol building and . . . had a first row seat.”

He also raised the specter of a future gun rights rally at the Capitol, saying there would be “blood running out of that building” and promising, “we will plant our flag on the desk of Nancy Pelosi and Chuck Schumer.”

Griffin said at a commission meeting last week that he planned to return to Washington to protest the inauguration and would bring guns with him, the affidavit said. He was arrested Sunday afternoon just north of the Capitol.

The affidavit said Griffin was interviewed by the FBI on Monday and told agents “that he hopes a change in leadership can be accomplished ‘without a single shot being fired’ but noted that there was ‘no option that’s off the table for the sake of freedom.’ “

Jones, of Mount Washington, Ky., was arrested Sunday. He is charged with assaulting a federal officer, civil disorder, obstruction of justice, destruction of property and trespassing. To support those charges, prosecutors submitted a statement by FBI Special Agent Javier Gonzalez narrating the three minutes before Babbitt was shot.

Citing video footage published by The Washington Post and on YouTube, the agent described apparent lawmakers and officials awaiting evacuation yards behind lobby door, which was barricaded with chairs and protected by officers.

One man splintered the glass door panels with punches as the crowd shouted at officers, including one person who cried out “F— the blue” multiple times, the statement by Gonzalez says.

Another voice warned the officers to leave, saying he did not want to see them get hurt. Three officers appeared to move to one side as colleagues in tactical gear arrived, the statement says.

But within seconds, a man identified as Jones allegedly struck the glass with a wooden flagpole at least 10 times, attempting to break in. A police officer, with gun raised, appeared to shoot Babbitt, with Jones still in view at the left, holding the pole, the FBI agent said.

The FBI interviewed a relative and a close friend of Jones who had identified him from footage of the shooting, the agent said. Court papers say the relative, identified as W-1, told the FBI that he spoke with Jones on the night of Jan. 6.

The relative allegedly described Jones’s clothing to FBI agents as a way of identifying him, and said Jones was “using a rolled up Trump flag to attempt to break the glass on an interior door,” the court papers say.

In three FBI interviews, the witness told agents that he contacted Jones after watching news of Babbitt’s death and told him that he needed to contact the FBI or an attorney. Jones allegedly responded by saying he wanted to explain to another close friend “why it all was happening and why it was a hoax.”

That friend, identified as W-2, also allegedly told FBI agents that he recognized Jones from video circulating on the Internet as the man wearing a red jacket and a gray cap, breaking a window inside the Capitol, and standing next to Babbitt.

The FBI said the friend told agents that Jones called him on Jan. 7, saying he was in trouble, admitted that he broke the glass and “called himself an idiot.” According to the affidavit, the friend said Jones told him that he was in the middle of the crowd and had been able to walk into the Capitol “without any problem.”

Jones attended a previous Trump rally in Washington, his relative allegedly told the FBI, adding that he saw on Facebook that Jones was going to the Capitol on Jan. 6. The “Stop the Steal” demonstration that day was inspired by Trump’s repeatedly debunked claims that he lost reelection because of fraud.

At least three others were arrested or charged in their home states over the weekend, the U.S. Justice Department said.

One was Brandon Fellows, 26, of Albany, N.Y., who told Bloomberg News that he had “no regrets” about entering the Capitol and that his Bumble dating profile was “blowing up” after he posted a picture of himself there.

Photos on social media sites show Fellows with his feet propped on a table in the private office of Sen. Jeff. Merkley, D-Ore., and sitting on a police motorcycle outside the Capitol, wearing costume hat, fake orange beard and a red, white and black jacket and “USA” in blue letters, the FBI said. He was charged with trespassing and disorderly conduct on Capitol grounds.

On Saturday, two cousins were arrested and charged with assaulting police, civil disorder, and other offenses during the riot. One allegedly told a witness that he would return to Washington, armed, for future pro-Trump demonstrations and not go home “unless he was in a body bag,” the FBI said.

An FBI affidavit said Cody Page Carter Connell of Louisiana allegedly described events in a conversation on social media, saying he and his cousin Daniel Page Adams of Texas stormed police and breached the Capitol after Adams “got clubbed and shot with rubber bullet.”

“But we pushed the cops against the wall, they dropped all their gear and left,” the FBI quoted Connell as allegedly saying.

“We will be back and it will be a lot worse than yesterday,” Connell allegedly wrote on Facebook, the FBI said.