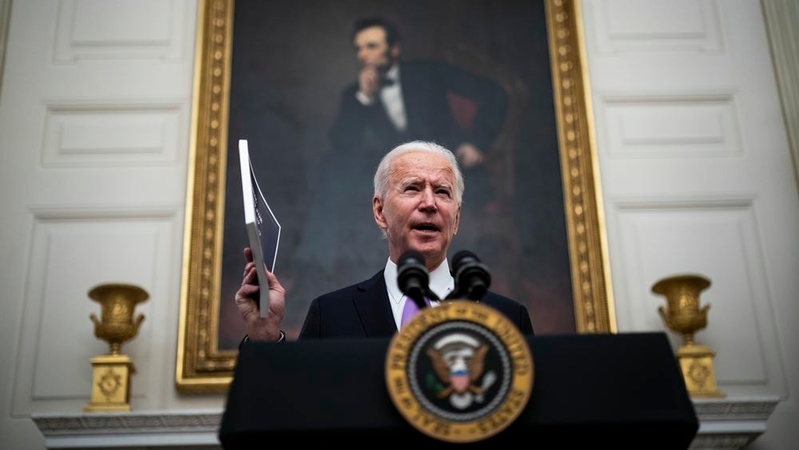 President Biden speaks about the coronavirus pandemic before signing executive orders at the White House on Jan. 21. MUST CREDIT: Washington Post photo by Jabin Botsford.

WASHINGTON – President Joe Biden is expected on Friday to significantly increase federal food assistance for millions of hungry families among executive actions intended to stabilize the deterioration of the economy weighed down by the raging coronavirus pandemic.

Biden is asking the Department of Agriculture to allow states to increase Supplemental Nutrition Assistance Program (SNAP) benefits – commonly known as food stamps – and to increase by 15% benefits awarded through a school meals programs for low-income studentsstarted during the pandemic, according to Biden administration officials. That could give a family of three children more than $100 in extra benefits every two months, officials said.

A separate unilateral move aims to help get previously approved stimulus checks into the hands of Americans who haven’t received them yet. And another would ask the Labor Department to make clear that workers who refuse to return to working conditions that could expose them to the coronavirus should be eligible for unemployment insurance.

Brian Deese, director of the White House National Economic Council, told reporters on a call Thursday night that the measures are meant as only partial solutions, as the administration kicks off negotiations with Congress on its $1.9 trillion relief economic proposal.

The U.S. economy has shown new signs of damage, particularly in the labor market. Last month, the economy lost jobs for the first time since the recovery began, and weekly jobless claims in January have remained at historic highs amid growing fears of long-term damage to the economy. Biden has inherited the worst jobs market of any president in modern history.

“These actions are not a substitute for comprehensive legislative relief,” Deese said, “but they will provide a critical lifeline to millions of American families.”

Biden’s order attempts in several ways to address the surge in hunger in America during the pandemic, with approximately 50 million people, including 17 million children, considered food insecure.

Previous coronavirus relief bills did not expand SNAP for the 40 percent of recipients who were already at the maximum benefit. Biden’s new order would allow states to increase SNAP emergency allotments for those who need it most, allowing an additional 12 million people to receive enhanced benefits.

Under Biden’s order, an electronic debit card benefit for students will increase by approximately 15%. The program is called Pandemic EBT and goes to students who would have qualified for free or reduced-priced school meals were school in session.

Perhaps the most significant change in this executive order is a reassessment of the USDA’s Thrifty Food Plan, the basis for determining SNAP benefits. Lisa Davis, senior vice president of Share Our Strength’s No Kid Hungry campaign, said the metrics are out of date with the economic realities most struggling households face. The president will ask the USDA to consider beginning the process of revising the Thrifty Food Plan to better reflect the modern cost of a healthy basic diet.

“Any one of these in itself would be terrific, but if you bundle them together, these are indeed quite significant in terms of helping Americans get through one of the most terrible times in our lives,” said Catherine D’Amato, chief executive of Greater Boston Food Bank.

Biden will also restore collective bargaining power to federal workers and direct agencies to develop recommendations “directing his administration to start the work” of an executive order requiring federal contractors to pay a $15 per hour minimum wage and provide emergency paid leave. Biden endorsed similar commitments during the presidential campaign.

In terms of stimulus payments, the White House says it will ask the Treasury Department to consider improving its disbursal, in part by “working to make sure those who have not yet accessed their funds get the relief they deserve.” It is not clear exactly what measures Treasury could take to ensure as many as 8 million people who have not received their stimulus payments from last spring get them.

Biden’s executive actions will also aim to buttress unemployment benefits as about 10 million remain out of work. Democrats in Congress had for months asked the Trump administration to make clear to states that workers who felt unsafe returning to work due to the coronavirus should not be denied jobless benefits. States had wildly different interpretations of the rules, leading thousands to be deprived of unemployment aid, said Andrew Stettner, an unemployment expert and senior fellow at the Century Foundation, a think tank.

“The federal government has a role to tell the states what they should do on this,” Stettner said. “This is significant.”

The executive actions also include a number of measures related to U.S. federal employees. President Donald Trump had issued an executive order in October that would have stripped civil service protections from federal employees whose work involves policymaking, allowing them to be dismissed with little cause or recourse, much like the political appointees who come and go with each administration.

Civil service experts and union leaders estimated that from tens of thousands to hundreds of thousands of federal employees in a workforce of 2.1 million would have been swept into the new class of employees, called Schedule F. Biden will reverse that decision.