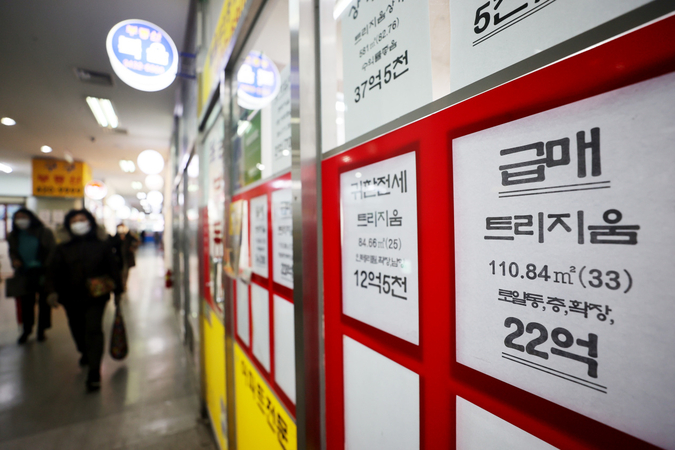 This photo, taken Tuesday, shows notices for housing transactions put up at a realtor office in Seoul. (Yonhap)

Finance Minister Hong Nam-ki said Wednesday the government will focus on accelerating the implementation of the latest housing supply plan in a bid to help stabilize rising home prices.

The government said early this month it will ease construction regulations and support redevelopment projects in urban areas to increase the number of new homes by up to 836,000 nationwide in the next four years.

Hong said in a ministerial meeting on the housing market that the country will first select the candidates for sections of land by the second quarter that will be used to build some 250,000 properties.

Hong said the government will be able to supply 2.05 million homes across the country by 2025, the largest amount in two decades.

“It is time for market players to view housing buying in a cool-headed manner, given that apartment prices in Seoul sharply fell in the midst of the 2008-09 global financial crisis,” he said.

The latest housing policy centers on expanding the home supply in the greater Seoul area and other major cities in what could be a shift from its focus on imposing tougher regulations, including lending curbs.

Soaring housing prices have shown no signs of a letup despite the government’s efforts to cool down the heated market. Prices for home rentals have also shot up in recent months due largely to a supply shortage. (Yonhap)