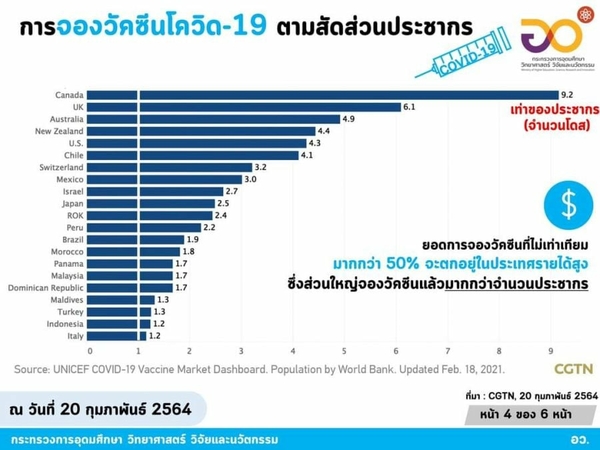 Over 200 million doses of Covid-19 vaccines have been injected so far, with the United States having the most — 55.2 million doses — followed by China with 40.5 million doses, according to an analysis by the Ministry of Higher Education, Science, Research and Innovation (MHESI) on the global vaccination situation and the economic status of countries.

Sirirurg Songsivilai, permanent secretary for higher education, science, research and innovation, said that considering its small population size Israel had made the most progress with 80 per cent of the population vaccinated.

2. Many high-income countries are reserving more vaccines than their population because they are unsure of which vaccines would be most effective or safe. For example, Canada has reserved 9.2 times the vaccine requirement for its population, UK 6.1 times, Australia 4.9 times, New Zealand 4.4 times, and the United States 4.3 times, etc.

4. Many countries are adopting diplomatic policies on vaccines. Countries with large vaccine-producing capacities, such as China, the United Kingdom and Russia, have adopted donation and aid mechanisms to vaccinate countries in diplomatic, international relations and humanitarian terms, such as China has announced guidelines that provide assistance. This has helped donate vaccines made in China to 53 developing countries, including export to 22 countries, and Beijing has announced that it would donate 10 million doses to the Covax project.

5. In the last week, studies on the Covid-19 vaccine shows the efficacy of the vaccine to stimulate the immune system as well as reduce the severity. The number of patients and deaths was clearly reduced. The used vaccines have had relatively few side effects. The vaccine can boost immunity quite well after the first shot. It should also be able to increase the time between the first and second injections. This reduces the burden of accelerating the second injection. This makes it possible to distribute the existing vaccines to cover a larger population instead of speeding up a second dose. However, there is some concern about the protective effect against mutated strains. The vaccine has been found to have decreased effectiveness against some species of Covid-19, especially from South Africa.

6. Countries whose vaccine stocks exceed the need will distribute the reserved vaccine to other countries after seeing effective use of the vaccine. Many countries feel relieved that they may be able to hand out excess stocks. This will change the international inoculation situation by bringing vaccines that are not urgently needed or overbooked to other countries.