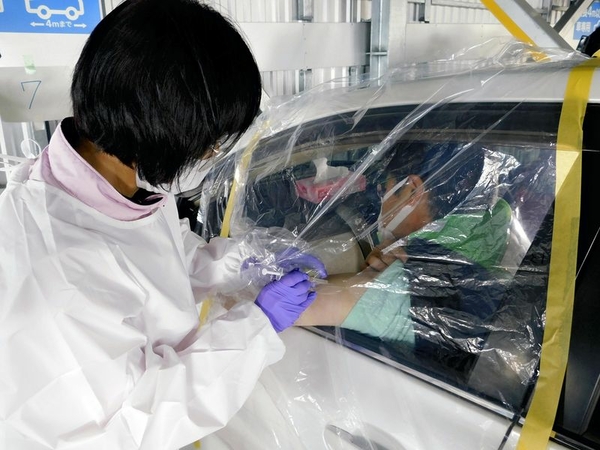 A medical worker administers a vaccine to a recipient in a car at Matsunami General Hospital in Kasamatsu, Gifu Prefecture, on Friday. (The Yomiuri Shimbun)

KASAMATSU, Gifu — Matsunami General Hospital in Kasamatsu, Gifu Prefecture, conducted a trial of drive-in inoculations on Friday in preparation for the full rollout of the vaccination campaign.

The hospital’s Chief Executive Officer Hidetoshi Matsunami devised the initiative, in which vaccines were administered to recipients while they were seated in their vehicles. According to Matsunami, it was the first such trial to be conducted in Japan.

During mass vaccinations in venues such as gymnasiums, large numbers of people undergo consultations at the site to check for such conditions as allergies, a process that is time-consuming and raises the problem of infection prevention.

In this new drive-in style, however, because the vaccine is administered without recipients having to leave their vehicles, time is saved, and the risk of infection drops significantly.

In the trial, a plastic sheet was attached to the window of recipients’ vehicles, a medical worker carried out brief consultations, and the vaccine was then administered through a hole in the plastic sheet. Next, cards indicating when 3, 7, and 15 minutes had elapsed were shown to recipients in the vehicles, and they were told to indicate with hand signals if they had experienced an adverse reaction.

Based on the results of the trial, the medical associations of Kasamatsu and Ginan are planning to carry out mass vaccinations at large sites and drive-in venues.

“We feel that time can be saved by asking recipients to bring medical questionnaires provided by their home doctors and wear clothing that allows ease of access for vaccinations,” Matsunami said.

“It could be possible to vaccinate as many as 60 people in an hour [at drive-in sites], which is much faster than inoculating people at a large site.”