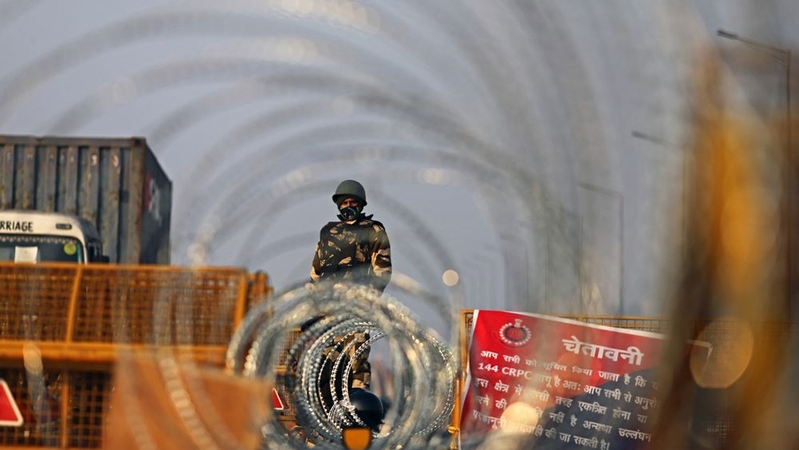 A police officer in riot gear stands guard beyond razor wire coils along a highway in Ghazipur on the outskirts of New Delhi, India, on Feb. 6, 2021. MUST CREDIT: Bloomberg photo by Anindito Mukherjee

In its struggle to quell unrelenting farmer protests, Prime Minister Narendra Modi’s administration is using a colonial-era sedition law that has been used to lock up dissidents often without bail while they await trial — sometimes for years.

Delhi police this month arrested environmental campaigner Disha Ravi, 22, at her home in the southern city of Bangalore for editing and sharing a “tool kit” tweeted by teenage climate activist Greta Thunberg in support of the farmers. Police said the document aimed to “spread disaffection against the Indian state” in a tweet that tagged the prime minister’s office.

Ravi joined at least seven others hit with similar charges since the farmer protests began almost three months ago, including a former foreign minister, journalists, authors and academics, part of a growing number of sedition cases under Modi. The total number of cases has risen from 43 when he first took office in 2014 to more than 100 each of the past two years, according to research group Article14. Since multiple individuals can be charged in one case, it said, the number of people affected stretches into the thousands.

A relic of the British colonial government once used against Mahatma Gandhi, India’s 19th-century sedition statute gives police broad powers to make arrests ahead of filing formal charges if an act or speech by an individual is “regarded to be disloyal to or threatening to the state.” The maximum penalty can be a life term in prison.

Still, many cases rarely even reach that stage: Only 10 people have been convicted under the law in the five years to 2019, according to data presented to parliament. For the government, the real use of the law is the ability to deny bail and keep people locked up for years while their cases trudge through the court system.

“The process is truly the punishment now,” said Lubhyathi Rangarajan, head of the sedition database of Article 14. “Cases are being filed at multiple places, arrests made, remand periods extended and bail denied.”

The farmers — many of them Sikhs from the northern states of Punjab and Haryana — want Modi to repeal three laws passed in September that allow them to sell crops directly to private firms instead of licensed middlemen at state-controlled markets. While Modi has said the laws will help them earn more cash, farmers fear those companies won’t give them minimum prices set by the government.

Members of the ruling Bharatiya Janata Party have alleged the protesters have connections to a Sikh separatist movement dating back to the 1980s, and Delhi Police also linked Ravi’s arrest to connections with those groups. Her family or lawyers couldn’t be reached for comment. Protest leaders have repeatedly denied any links to separatists.

Farmers sit inside a tractor trailer at a protest site at a roadblock on the Delhi-Haryana border crossing in Singhu, Delhi, India, on Dec. 3, 2020. MUST CREDIT: Bloomberg photo by Prashanth Vishwanathan

The protests were largely peaceful until Jan. 26, when a rally on India’s Republic Day led to clashes that left one demonstrator dead. Since then police have put cement barricades and razor wire around the protest sites, while using targeted internet blackouts that have drawn criticism from the U.S. State Department. Some 152 people have been arrested over the clashes apart from the sedition charges, according to reports.

Celebrities have weighed in on behalf of the farmers, including Thunberg, pop singer Rihanna, actress Susan Sarandon and Meena Harris, the niece of U.S. vice president Kamala Harris. The government has dismissed the international reaction as “vested interests” trying to “mobilize international support against India.”

“Suddenly, activists are being villainized and journalists harassed,” said Vinod Jose, executive editor of The Caravan magazine who was among six journalists charged with sedition, along with former minister and opposition lawmaker Shashi Tharoor. “The jailing of civil liberties activists in the last three-four years have shown us the decline in freedom of press and rule of law.”

While the U.S. has criticized the internet blackouts, President Joe Biden has a “delicate balancing act” given India has become a key partner on issues such as climate change and countering China in the Indo-Pacific, said Akhil Bery, Washington-based South Asia analyst at risk consultancy Eurasia Group.

“If the Modi government continues to arrest activists for nonviolent protests, pressure will grow on the Biden administration to address this more publicly,” he said.