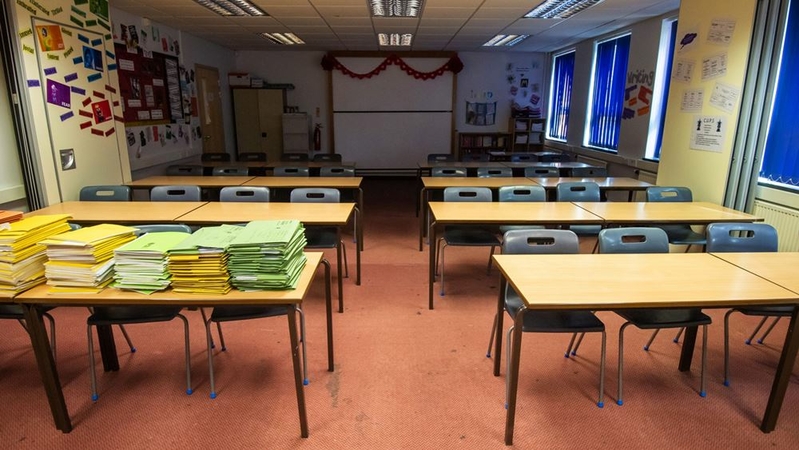 A social-distancing floor marker sits in a classroom at All Saints Catholic College in Manchester, England, on Sept. 1, 2020. MUST CREDIT: Bloomberg photo by Anthony Devlin

British Prime Minister Boris Johnson declared the end of the pandemic is “in sight” for England as he set out his aim to ease lockdown rules in a series of stages over the next four months.

Johnson detailed a four-step plan that will reopen schools from March 8, outdoor hospitality from mid-April and sports stadiums by mid-May. From June 21 all remaining businesses, such as nightclubs, will resume operations and rules on social contact will be scrapped.

The premier warned that his blueprint for a return to normality depends on keeping the virus under control. More deaths will inevitably follow the ending of lockdown but if infection rates surge dramatically again, restrictions will have to stay, he said.

“This road map should be cautious but also irreversible,” Johnson told members of Parliament in London. “The end really is in sight and a wretched year will give way to a spring and a summer that will be very different and incomparably better than the picture we see around us today.”

While U.K. leisure and travel stocks jumped as Johnson revealed his timeline, he is already facing pressure to move faster after the economy endured its deepest recession in more than 300 years. Chancellor of the Exchequer Rishi Sunak will announce more support for pandemic-hit businesses in his budget next week.

England has been under lockdown since early January, and even under Johnson’s plan, government guidance asking people to work from home where possible will remain in place at least until June 21, when social distancing measures will be reviewed.

Each move will be taken uniformly across England, with authorities in Scotland, Wales and Northern Ireland making their own plans.

The government said there must be a five-week gap between the key stages in the plan to allow officials to evaluate the impact of relaxing the rules on the spread of the virus before moving on to the next step. Further easing will depend on the vaccine program working, hospitals remaining safe from a surge in cases, and new strains not threatening to increase the risks.

There will be a review of social distancing measures such as face coverings, and a task force will be set up to explore how to enable more international travel while managing the risk of new variants entering the country. Johnson also announced a review into whether proof of vaccines could be used to give people access to venues or workplaces domestically, having acknowledged that such documentation would likely be necessary for travel to certain countries.

“There may well be a role for certification. We just need to get it right,” he said at a press conference on Monday. “There are clearly some quite complex issues, some ethical issues about discrimination and to what extent government can either compel or forbid use of such certification.”

With cases and deaths now falling rapidly, an influential group of Conservative backbenchers wants to see all restrictions lifted by the end of April.

Johnson’s predecessor, Theresa May, welcomed the return of pupils to schools but urged him to move faster to open up the aviation industry. Former Conservative leader Iain Duncan Smith also urged Johnson to reopen the hospitality sector more quickly.

Falling case numbers and a significant acceleration of the U.K.’s vaccination program have fueled calls to lift the curbs. All adults are due to be offered a vaccine shot by the end of July and everyone over 50 by mid-April. More than 17.7 million people have had a vaccine so far.

Still, Johnson’s top medical and scientific advisers used a televised press conference to warn the public that the fight against the virus will outlast the government’s lockdown exit plan. Chief Scientific Officer Patrick Vallance said it may be necessary to wear face masks next winter, while Chief Medical Officer Chris Whitty said coronavirus will be a risk to vulnerable members of the population for the foreseeable future.

“We cannot persist indefinitely with restrictions that debilitate our economy, our physical and mental well-being, and the life-chances of our children,” Johnson said. “We are setting out on what I hope and believe is a one-way road to freedom.”