The Smithsonian is turning 175. It’s celebrating with robots, flying cars and hope. 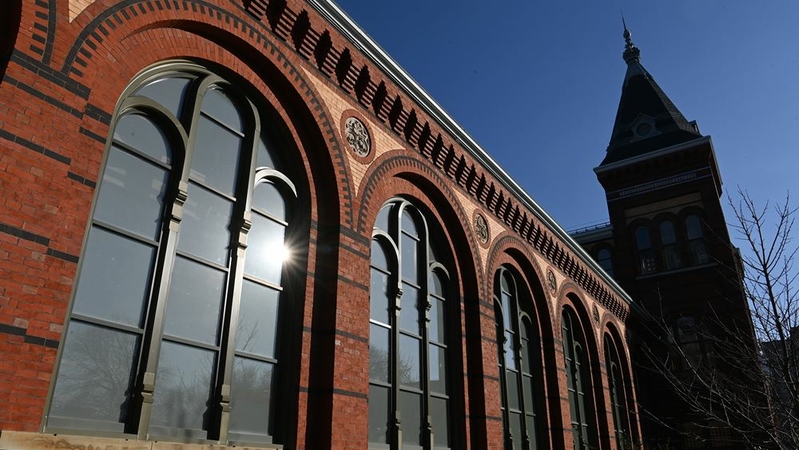 The Smithsoanian’s Future event will reopen the AIB, the 1881 structure that was the institution’s first dedicated exhibition space. It has remained closed to the public since 2004. MUST CREDIT: Washington Post photo by Matt McClain

WASHINGTON – Smithsonian Secretary Lonnie Bunch likes to tell museum visitors that looking to the past can help them understand the future. To celebrate its 175th anniversary, the Smithsonian is turning that idea on its head by focusing on the future to celebrate its past.

“Futures” is a groundbreaking, multidisciplinary exhibition that will blend art, science, design, history and technology in a celebration of the world’s largest museum complex. Part festival, part exposition, part exhibition, “Futures” was created during a worldwide pandemic – but it nonetheless offers a hopeful glimpse of what lies ahead.

Opening in November and running through July 2022 at the Smithsonian’s Arts and Industries Building, “Futures” will include site specific art installations, a wetlands exhibit, a flying car and – of course – robots. It will help visitors imagine the future they want, not the one they fear, said Rachel Goslins, AIB’s director and the visionary behind the project.

The event will reopen the AIB, the 1881 structure that was the institution’s first dedicated exhibition space and the incubator of the American History, Natural History and Air and Space museums. Nicknamed the Mother of Museums and the Palace of Invention, the building is a playful space, “a circus tent made of bricks,” Goslins said. She added that it’s the perfect site for an exploration of the future that’s tied to the Smithsonian’s past.

“The Smithsonian was always about how it could help the country reimagine itself, understand itself,” said Bunch, a historian and founding director of the popular National Museum of African American History and Culture. “The work we did with early aviation, even the way we collect history, which was always trying to ensure future generations understand how we got where we are.

“The notion is to help people recognize that they create the future. Often we think technology and everything sweeps over us, and that’s partly true, but we can also ruminate about what we want the future to be.”

“The future isn’t a fact. It’s a dream,” said Rachel Goslins, director of the Smithsonian Arts and Industries Building, about the “Futures” exhibition. MUST CREDIT: Washington Post photo by Matt McClain

“Futures” serves as a dress rehearsal for the AIB’s own future. A $55 million renovation completed in 2015 allowed it to host a few special events, but it has remained closed to the public since 2004. This spring, the Smithsonian announced a plan to renovate both the AIB and the Castle, the iconic administration building next to it on the southern edge of the National Mall. The AIB is also a potential site for the newly authorized National Museum of the American Latino.

Curators Glenn Adamson, Ian Brunswick, Brad MacDonald, Ashley Molese and Monica O. Montgomery have been collaborating for more than a year on the exhibition, tapping into the Smithsonian’s deep collections and experts to create immersive and interactive displays. The Rockwell Group, an award-winning architectural firm whose résumé includes Tonys for scenic design and an Emmy for art direction, designed the 32,000-square feet of exhibits.

“Futures” is organized in four sections, each housed in one of the AIB’s main halls. It opens with “Past Futures,” where artifacts and objects from across the Smithsonian – some on display for the first time – offer a view of how previous generations saw the future.

“The Smithsonian is an engine of the future, it has always recognized itself as that,” said Adamson, curator of this section. Visitors will encounter early androids, an experimental Alexander Graham Bell telephone and the Bakelizer, an early 20th-century machine used to produce commercial quantities of plastic.

“Futures that Inspire” features artificial intelligence that promotes meditation, while “Futures that Work” focuses on food, work and sustainability. It will include an algae bioreactor that cleans as much air as a 400-acre forest. “Futures that Unite” focuses on social themes, including justice and health.

“We’re approaching the future with a sense of adventure, of playfulness,” Adamson said. “It’s not all about hardnose problem-solving but leaps of imagination.”

Smithsonian curators anticipate the exhibition will be a tonic for visitors who – they hope – will be emerging from the worst of the pandemic. MUST CREDIT: Rockwell Group handout

Visitors will be encouraged to share their ideas and opinions, Montgomery added.

“We want people to feel a sense of agency and hope when they go through our halls. There will be areas for people to be contemplative and areas for speaking out,” she said. “We know there’s not just one approach to the future. It’s multifaceted, multivocal. It envisions equity and sustainability. It’s asking juicy questions rather than prescribing what will be. We’re counting on the brilliance of our audience.”

“The thrust of the exhibition is curiosity, not education. One of the ways I think we push the envelope is to create an exhibition that listens as much as it speaks. In general, in museums, there’s a lot of broadcasting and not as much listening. This is a good example of how to democratize, to open a platform for outside voices.”

The exhibition’s optimistic attitude was informed by 2020’s dual crises of the pandemic’s shutdowns and the national protests for racial justice. The final version – shaped by a team that never met in person – emphasizes health and social justice themes and is touch-free.

“The show was devised as having an optimistic cast from the beginning, pre-covid. But the pandemic made us lean in even more,” Adamson said.

A support robot that reduces loneliness was a covid addition to an expanded health section. The curators also emphasized their visitors’ role in shaping the future, an extension of last year’s social protests.

“We want visitors to come and make their mark. We can channel that energy in this space where you are committing to taking personal action,” Montgomery said. “Don’t be so depressed by this moment that you can’t even dream of a brighter future.”

The curators anticipate the exhibition will be a tonic for visitors who – they hope – will be emerging from the worst of the pandemic.

“In November, we’ll be coming out of this dark time, and it will feel super timely. It will feel very right to people.”

Adamson’s optimism aside, the Smithsonian has learned that the pandemic is unpredictable, and it has contingency plans in place if there’s a coronavirus setback. The exhibition will follow Smithsonian guidance and policies, and the safety of the staff and visitors is the priority, an AIB spokeswoman said. The AIB is large and open, and the exhibit features touchless interactive technology and an extensive mobile experience.

Officials haven’t announced exact dates of the run or daily schedules yet, and it has not determined whether visitors will be required to have free timed passes for entry. That information, and a schedule of in-person and virtual events, will be released later in the year on the AIB website.