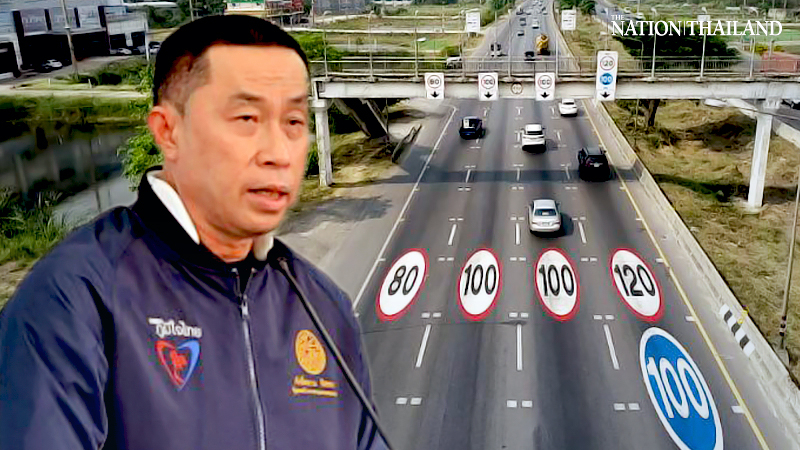 The Asian Highway from Ayutthaya to Ang Thong province will be the first thoroughfare on which motorists will be allowed a maximum speed of 120 kilometres per hour.

Transport Minister Saksayam Chidchob on Thursday presided over a ceremony kickstarting the increase in speed limit from 90kmph to 120kmph. The event was held at the district highway office, which oversees Highway 32 in Ayutthaya’s Bang Pa-in district.

Part of the Asian Highway, Highway 32 is 150.5km long and runs from Bang Pa-in in Ayutthaya to Manorom district in Chai Nat province passing through Ang Thong and Sing Buri provinces.

The Transport Ministry announced on March 10 that it was raising the speed limit on four-lane highways from 90kmph to 120kmph for vehicles with fewer than seven seats. Other vehicles’ speed limits have also been raised.

“The new speed limits aim to keep the traffic moving while ensuring road users’ convenience and safety,” Saksayam said. “The new speed limits will be applied on roads that have a median barrier with no intersections or U-turns to prevent accidents. The roads must also be fitted with proper signage as well as rumble strips, so motorists are aware of the beginning and end of the speed control zone.”

Sarawut Songwilai, director-general of the Department of Highways, said that the Highway 32 section allowing a speed limit of 120kmph is 45.9km long, however, this speed can only be applied in the right-most lane.

Vehicles are required to maintain a speed of under 80kmph in the left-most lane and 100kmph in the middle lanes.

“The department will specify more roads where the new speed limits can be applied by August. The aim is to cover about 260km of roads in all regions of Thailand,” he said.