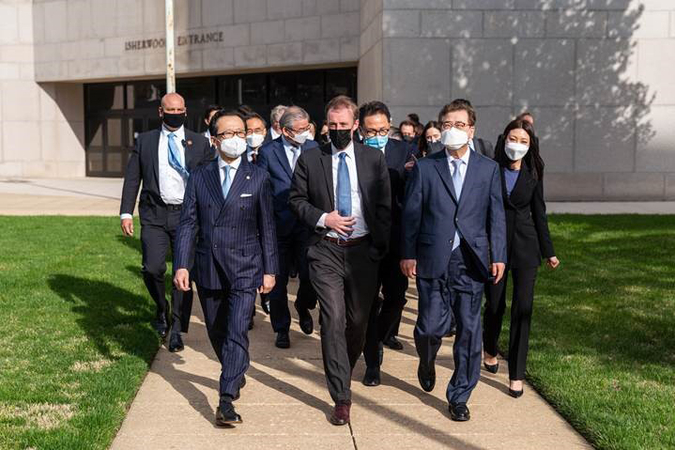 “South Korea, the US and Japan agreed on the urgency of the North Korean nuclear issue and need for a diplomatic solution to the issue,” Suh told reporters after a three-way meeting with his US and Japanese counterparts, Jake Sullivan and Shigeru Kitamura.

The three also agreed that “efforts to resume North Korea-US negotiations at an early date must continue,” he added.

Friday’s meeting between the top security advisers of South Korea, Japan and the United States marked the first of its kind since US President Joe Biden took office on Jan. 20.

The face-to-face meeting was held at the US Naval Academy in Annapolis, Maryland.

Washington earlier said the meeting would provide an opportunity to explain the outcome of its ongoing North Korea policy review to the two key US allies in Asia, and also provide Seoul and Tokyo with “another opportunity” to provide their own input into the new US policy on North Kora.

“The US side explained the interim outcome of the ongoing North Korea policy review, and the security advisers of South Korea, the US and Japan held in-depth discussions on various issues related to preparations and implementation of measures for negotiations with North Korea,” Suh said of the meeting.

The US has said its policy review is now in its final stages.

Pyongyang has stayed away from denuclearization talks since its leader Kim Jong-un’s Hanoi summit with former US President Donald Trump, held in February 2019, ended without a deal.

The Biden administration has sought to engage with North Korea since mid-February but says the reclusive nation remains unresponsive to its overtures.

North Korea has said it will continue to ignore US overtures until Washington gives up its hostility toward Pyongyang.

Suh said he highlighted the positive effect a good inter-Korean relationship may have on denuclearization talks with the North.

“We underlined the importance of engagement with North Korea in the denuclearization process, coordinated strategy between South Korea and the United States and the virtuous cycle between inter-Korean relations and denuclearization negotiations,” he said of his bilateral talks with Sullivan.

“The US side explained the progress so far with regard to its North Korea policy review and agreed to continue consulting with us throughout the remainder of the review process,” he said.

“South Korea and Japan agreed to play constructive and active roles in the process of the US North Korea policy review, and agreed on the importance of cooperation between South Korea, the U.S. and Japan for the resolution of the North Korean nuclear issue,” he told reporters.

The South Korean official said the bilateral and trilateral talks provided an opportunity for the three countries to discuss a wide range of issues of mutual interest.

“South Korea, the US and Japan also discussed global issues such as climate change and agreed to strengthen their cooperation based on their shared values. As a result, I believe the three countries were able to hold strategic dialogue on various issues of mutual interest through this trilateral security advisers’ meeting,” Suh said. (Yonhap)