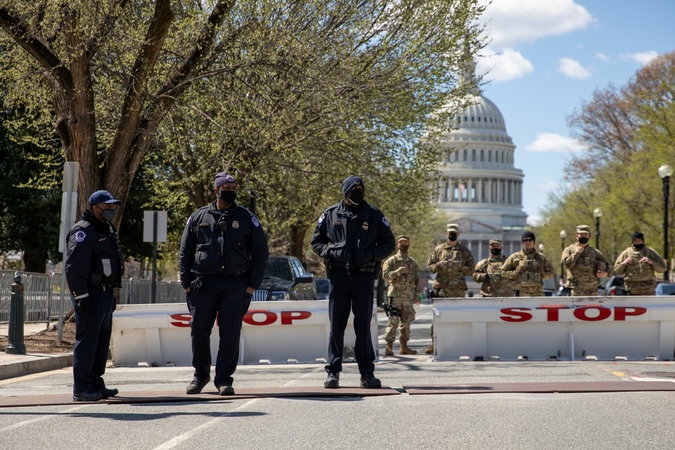 Police officers and members of the National Guard protect the Capitol on Friday, April 2, 2021. Photo for The Washington Post by Amanda Andrade-Rhoades

WASHINGTON – For residents of this city that has been under occupation for months, the arrival of spring brought a sense that life here might finally be getting lighter.

The weather had warmed, the cherry trees had blossomed and the fencing that had fortressed the District of Columbia’s power centers since the violent insurrection on Jan. 6 was beginning to fall away.

But on Friday afternoon, the dread came back after a man crashed his vehicle into two police officers outside the U.S. Capitol.

The attack that left one officer dead and the assailant fatally shot by police reignited the ongoing political debate over how to keep Congress safe nearly three months after the Capitol riots.

On Saturday, Senate Majority Leader Charles Schumer, D-N.Y., said the recent attack “has only added to the need to address security at the Capitol in a comprehensive way.”

“Senate Committees are already conducting bipartisan and extensive reviews to ensure the Capitol is as secure as possible while also remaining accessible to the public,” Schumer said. “We are fully committed to ensuring the Capitol is safe for visitors and all who work here.”

The same day, the family of the suspect, Noah Green, released a statement saying the young man was “not a terrorist by any means.” He had been studying for his master’s degree in business administration but had also suffered from “depression and potential mental illness.” After graduating college, the family statement said, “he began to experience hardships among his peers” that may have stemmed from repeated head trauma during his years playing football, including as a defensive back at Christopher Newport University.

Green was identified as the suspect by several people familiar with the investigation. Police have not yet officially released the assailant’s identity.

Green’s family said they are “very shocked and upset” by the attack and that they “feel great sympathy” for William Evans, an 18-year Capitol Police veteran who was killed, and the officer who was injured. They learned about what had happened through the news, the family said, and were “were just as taken aback as the rest of the nation from this horrific event.”

For Capitol Hill residents, the incident Friday afternoon forced a flood of familiar feelings back to the forefront.

Josh Martin, a 43-year-old lobbyist who has worked on and around the Hill for decades, said he was running errands in Virginia when his phone started buzzing with calls and texts from co-workers. He turned on the radio, checked Twitter for updates and began worrying for his wife and young daughter, who were at the family’s home just a few blocks from the Capitol near Stanton Park.

“What happened on January 6 was pretty scary,” Martin said.

Friday afternoon brought back the “same feeling,” he said. “Like, not again.”

Capitol Police were also mourning as tragedy struck the force yet again.

Evans is the second Capitol Police officer to die in the line of duty this year; Officer Brian D. Sicknick died of injuries he suffered fighting a riotous mob during the Jan. 6 insurrection at the Capitol. Four civilians died in that riot and two police officers who were there later died by suicide. Authorities and Evans’s family have not yet announced memorial or funeral plans. Sicknick was honored during a service at the Capitol.

On Saturday, Capitol Police said on Twitter that the department “is deeply grateful for the support we’ve received from around the world. We wish we could respond to each one of you. Please know your sympathy is appreciated beyond words.”

Miles of fencing went up months ago in response to homegrown threats to the seat of democracy.

There is bipartisan opposition to permanent fencing around the Capitol, though Democrats have been more measured in calling for it to be taken down, deferring to ongoing security reviews, while Republicans have seized on the fencing as evidence of Democratic overreaction. Residents of the usually quiet and idyllic neighborhoods near the Capitol have hoped that fencing and military Guardsmen will not become their permanent new normal.

House Speaker Nancy Pelosi, D-Calif., has maintained for weeks that she will support the recommendations of retired Lt. Gen. Russel Honoré, who led a task force to look at Capitol security after the insurrection. The task force’s report in March found numerous security “deficiencies” at the Capitol and called for an additional 854 Capitol Police positions, as well as increased screening and various types of fencing around the area.

After the attack Friday, Honoré reiterated that the Capitol remains a target around-the-clock.

“Any time of the day, 24/7, the Capitol could be attacked,” Honoré said on CNBC, “and it could be domestic, it could be foreign.”

The House is in the process of finalizing an approximately $2 billion security supplemental for equipment and personnel for the Capitol police, according to a senior Democratic aide, who spoke on the condition of anonymity to discuss private conversations.

Rep. Tim Ryan, D-Ohio, who chairs the subcommittee that oversees the Capitol Police, said Friday’s attack on the Capitol will renew conversations about the security needs. Ryan has been the rare member of Congress who has called for military fencing.

“From my vantage point, I just think we’ve got to be very careful as we move forward, that we can’t get too far ahead of ourselves without knowing that we have the ability to protect the Capitol,” Ryan said in a virtual press briefing Friday.

But Republicans, including top leadership, have criticized the security measures already in place.

Last month, Senate Minority Leader Mitch McConnell, R-Ky., said “there are no serious threats against the Capitol” and said Congress was “way overreacting to the current need.” He said the fencing – which at the time enclosed all congressional office buildings, the Library of Congress and the U.S. Supreme Court – reminded him of a war zone.

“I’m extremely uncomfortable with the fact that my constituents can’t come to the Capitol,” McConnell said.

Freshman Rep. Marjorie Taylor Greene, R-Ga., last month posed by a sign outside the Capitol that said, mockingly, “Welcome to FORT PELOSI” and tweeted that it was “time for this wall around the Capitol to come down!”

The location of the attack Friday, known as the North Barricade, is across the street from the Russell Senate Office Building and until recently had been hidden behind additional layers of fencing.

On Saturday morning, work crews were placing concrete barriers there along the inside of the fencing as visitors and residents walked the perimeter of the Capitol grounds.

“How close would we normally be able to get to the Capitol?” one young man asked his tour group.

Another woman whispered to a friend about the parishioners who had been celebrating Good Friday at St. Joseph’s, across the street from the Capitol, when chaos once again unfolded outside.

“I hope this isn’t the new normal, where all of this is blocked off and citizens or tourists can’t get in,” said Jackson Shuttleworth, 30, who had traveled to the District from Pittsburgh for a weekend getaway with his wife and baby. The appeal of the nation’s capital, he said, has always been its walkability and continuity.

Susan Haid, 65, paused on East Capitol Street between the Library of Congress and the U.S. Supreme Court to take a picture of the Capitol dome through thick, black fencing. It was the first time she had been in the District since last fall, before it was locked down.

“It’s really distressing,” she said. “It brings literal tears to my eyes to think we’re America and this is how we are now. And the family of the officer? There’s no words for that.”

“Another sad day for Washington,” Haid added. “It’s like spring juxtaposed with terror.”

The mood among Capitol Hill residents matched that of the dozens of National Guard members and law enforcement officers who had to resume their security posts after another targeted attack on their ranks. They mostly stood far back from the edge of the fencing, looking out at the passersby but not engaging.

But late Saturday morning, Bill Sutton, 68, and Sydnye Pettengill, 62, rode their bicycles up to the fence’s edge on First Street and climbed off. They had ridden into the city from Alexandria, picking up a bouquet of yellow and purple flowers on the way. They had been thinking about leaving a peaceful token there already, something that would hark back to the symbolism of the Vietnam War protester who slid a carnation into the barrel of a soldier’s rifle.

“And then yesterday happened,” Sutton said, “and it just added more profundity to the whole thing.”

So together, they lifted their own flowers above their heads and began weaving the stems into the fencing. And one of the officers walked up to greet them, helping from the other side