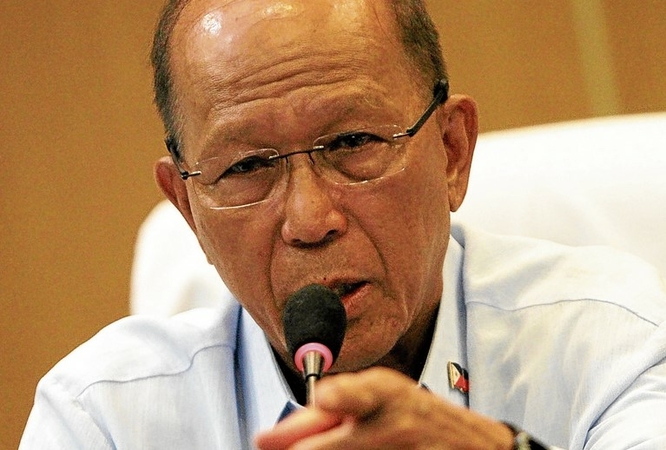 The Philippine defense chief on Sunday pressed his attack against the monthlong presence of dozens of Chinese vessels at a reef, accusing China of planning to again occupy maritime features in the West Philippine Sea or areas within the country’s exclusive economic zone (EEZ).

The dispute erupted last month when Manila lodged a diplomatic protest with Beijing and demanded the withdrawal from the Julian Felipe (Whitsun) Reef of more than 200 Chinese maritime militia vessels.

The military reported that 44 of them were still moored at the reef last week and nearly 200 more were scattered around other reefs and Pag-asa (Thitu), the biggest island occupied by Filipinos within the country’s 370-kilometer EEZ.

“The continued presence of Chinese maritime militias in the area reveals their intent to further occupy features in the West Philippine Sea,” Defense Secretary Delfin Lorenzana said in a statement on Sunday.

On Saturday, Lorenzana said he was “no fool” to believe the Chinese explanation that the ships were just fishing boats that had taken shelter at the reef due to bad weather, as the embassy had explained.

He said the weather was fine and there was no reason for them to remain at the reef. “Get out of there,” he said in Filipino.

In what is turning out to be a virtual verbal skirmish with the Philippine defense chief, the Chinese Embassy on Saturday evening shot back at Lorenzana for making

“The Chinese Embassy has taken note of the perplexing statement by Philippine Defense Secretary on Chinese fishing vessels around Niu’e Jiao in the South China Sea,” the embassy said in a statement, calling the reef by its Chinese name.

It maintained its claim that the reef was part of China’s Nansha Islands and a “traditional fishing ground” for the Chinese “for many years.” Nansha is what China calls the Spratlys archipelago, which is composed of reefs, atolls and islets that straddle the South China Sea.

“It is completely normal for Chinese fishing vessels to fish in the waters and take shelter near the reef during rough sea conditions,” the embassy said. “Nobody has the right to make wanton remarks on such activities.”

Saying it is “committed in safeguarding peace and stability in the waters,” the embassy expressed hope that Philippine officials “would make constructive efforts and avoid any unprofessional remarks which may further fan irrational emotions.”

In his statement on Sunday, Lorenzana lashed out at the embassy for its “utter disregard” of international laws, particularly the United Nations Convention on the Law of the Sea, saying its conduct was “appalling.”

In response to the Chinese claims over the reef, he said that the Philippine claims “stand on solid ground, while China’s do not.”

“Its nine-dash line claim is without any factual or legal basis,” he added, referring to China’s sweeping claims to nearly the entire South China Sea. “This, together with its so-called historical claim, was flatly and categorically rejected by the arbitral tribunal.”

In 2016, the international arbitral tribunal ruled to invalidate Beijing’s South China Sea claims and upheld the Philippines’ sovereign rights over its EEZ, including reefs on which the Chinese had built artificial islands which it had turned into military outposts. China rejected the ruling.

Foreign Secretary Teodoro Locsin Jr. said, “China can say what it wants, Philippines will do what it must to keep what’s hers by right.”

“Irrelevant whether we possess commensurate military power to meet the challenge; we will not yield but die—or trigger World War 3. Not a bad outcome; living is overrated. Honor is all,” he said in a post on Twitter on Sunday.

Locsin returned two days earlier from a trip to China for talks with Chinese Foreign Minister Wang Yi. No statement about the visit has been released.

Lorenzana reminded China of its obligations under the Declaration on the Conduct of Parties in the South China Sea, to “refrain from conducting activities that disturb regional and international peace and security.”

China and the 10-member Association of Southeast Asian Nations signed the declaration and promised to work on a more binding Code of Conduct.

Not an exchange for vaccines

Surigao del Sur Rep. Robert Ace Barbers on Sunday said Philippine territory was “not for sale nor trade” and “not equivalent” to China’s donation of COVID-19 vaccines.

“We are not ceding any portion of our territory in exchange for the vaccines,” he said in a statement.

China had donated about 1 million shots of the COVID-19 vaccine made by the Chinese pharmaceutical company Sinovac Biotech.

Locsin said, however, that “there is not even the faintest suggestion from China that the vaccines it generously provides has an exchange in mind be it sovereignty or concession.”

“It is just, Wang Yi said, what good neighbors do for each other. Chinese not cheap. It is help extended; no submission expected,” he said in response to a tweet from another person.

—WITH REPORTS FROM TINA G. SANTOS AND NESTOR CORRALES INQ