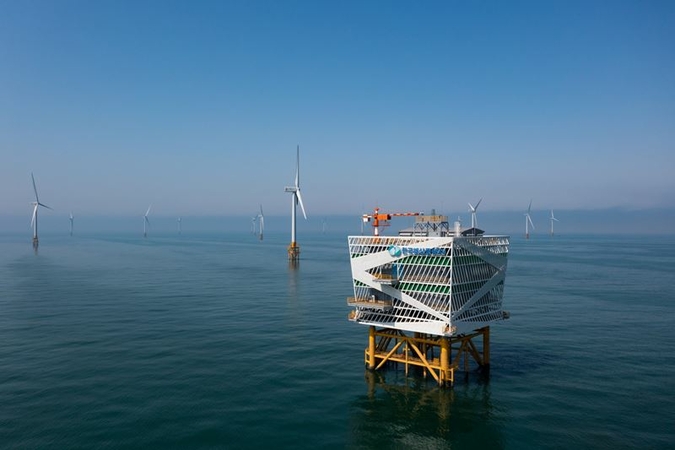 The fishing grounds where Jung Kuenbae and his forbears have caught shrimp, butterfish and croakers for three generations are going to be turned into the world’s largest offshore wind farm. He’s okay with that.

“I initially opposed the idea when the plan was proposed because it will destroy our livelihood,” said Jung, who leads a group of local fishermen in some 200 ships that drop nets in the waters off the southwestern tip of the Korean peninsula. “But I realized the project is part of the country’s transition to cleaner energy, which is something we have to come to terms with, rather than fighting against it.”

The 48.5 trillion won ($42.8 billion) wind farm, to be built over the next decade off the southwest coast of the country, would generate up to 8.2 gigawatts of power, one of a catalog of grand projects the government wants to roll out with private sector backing to meet its ambition of becoming carbon neutral by 2050.

It’s a momentous challenge. South Korea’s industrial ascent since the 1960s has made it one of the world’s top 10 energy users, with electricity consumption per capita ahead of both Japan and Germany. And two thirds of that comes from fossil fuels. Renewable energy accounted for only 6.5% of South Korea’s generation in 2019, with nuclear making up the balance.

“South Korea will have to source almost all of its electricity from renewable energy if it’s ever going to reach climate neutrality by 2050,” said Lee Sanghoon, president of the New and Renewable Energy Center at Korea Energy Agency. It “is a daunting task.”

Many countries are scaling up wind energy. Developers set a record last year as they installed 96.3 gigawatts of wind turbines globally, according to clean energy research group BloombergNEF. That would be enough to power about 36 million American households. The International Energy Agency estimates that at least 160 gigawatts of wind has to be added per year by 2025 in order to meet the Paris Agreement’s goals.

After retaining power last year on the promise of a “Green New Deal,” President Moon Jae-in’s Democratic Party has brought a new urgency to the transition, with a proposal to get more than 20% of its energy from renewables by 2030. For South Korea, it’s not just about curbing emissions. Apart from a tiny amount of gas and coal, all its fossil fuels are imported, costing the nation $73 billion a year.

With its conventional hydropower resources almost fully utilized and a climate and topography ill-suited for large solar and onshore wind plants, the country is looking out to sea to solve the problem. It already has the world’s biggest tidal power plant at Sihwa Lake. But the government sees one of its best prospects is to harness 12 GW from offshore wind by 2030, compared with less than 0.2 GW now.

The open seas have more consistent wind speeds and provide space to install the biggest, most efficient turbines. Just by using sites in shallow water that are near to shore, the world could get enough electricity to meet all global demand. With floating turbines that go further out to sea, wind power could satisfy more than 10 times the world’s total electricity demand by 2040, an IEA analysis showed.

So far countries in northern Europe such as the U.K., Denmark and Germany have dominated the offshore wind industry, thanks to generous government subsidies and unusually shallow waters of the North Sea. But that’s starting to change. Last year China installed a record-number of offshore wind turbines to become the world leader in total capacity. U.S. President Joe Biden’s administration plans to rapidly scale up wind farms off the east coast.

About 80 miles from the Korean island of Shinan, where the fisherman Jung lives, maintenance workers in helmets and orange life jackets climb a 200 meter-tall tower at the nation’s biggest existing commercial offshore wind farm, 30 minutes by boat from the port of Buan. The project’s 60 MW capacity is less than 1% of the proposed new wind farm in Shinan.

The complex, in the Southwest Sea, will be expanded to 2.46 GW after 2027, according to Korea Offshore Wind Power Corp., a special purpose company formed by state-run Korea Electric Power Corp. and six other generators.

One of the major challenges to achieving these goals is local opposition. A BloombergNEF report in September predicted that South Korea could fall short of the government’s target wind power by 4.6 GW, mainly due to “severe opposition” from local residents.

To ease conflict with the community, the Shinan government in 2018 passed rules allowing them to acquire a 30% stake in local renewable energy projects. That will provide a windfall for residents of six of the islands in the archipelago this month when last year’s profits from two solar plants are distributed.

“Renewable energy will become a stable source of income for Shinan residents, who are mostly in their 70s and 80s,” said Kim Jung Dae, a 63-year-old farmer who represents a group of local residents. “I wouldn’t be surprised if Shinan became the most well-off island in the country.”

There are other challenges. Wind power in South Korea currently costs about $220 per megawatt hour, according to IHS Markit, among the highest in the world.

“You’d need the wind to blow at 13 meters per second all day every day to run at full capacity of 8.2 gigawatts, which is impossible,” said Joo Han Gyu, a professor at Seoul National University’s department of nuclear engineering. “The economics of these wind turbines make no sense and the increased cost will eventually fall upon individuals.”

South Korea’s wind ambitions also rely on a sustained effort from dozens of private companies. The Shinan wind project, for example, is composed of about 20 separate ventures by corporations including SK E&S Co. and Hanwha Engineering & Construction. That means plans could get scrapped or modified as each company goes through the long process of obtaining permits and calculating costs.

To help accelerate installations, a “one-stop shop” bill will be proposed in the first half of this year that will allow the government to take the helm in exploring potential offshore sites and getting required permits, said Yoon Sunghyuk, a director of the renewable energy division at the Ministry of Trade, Industry and Energy.

One answer may be to develop floating plants that can be moored further out than fixed turbines, which are limited to shallow water, said Lee from the Korea Energy Agency. Several such projects are planned by companies including Korea National Oil Corp. and Equinor ASA, which aim to jointly construct a 200-megawatt complex in the East Sea near Ulsan.

For Jung, sitting in his office in Mokpo, the country’s interest in offshore wind has led him to see the energy transition as an opportunity, rather than the end of his career.

“No one knows the sea here better than us. I’m sure there will be plenty of work we can do,” Jung said. “If you can’t turn the tide, it’s better to embrace the flow.”