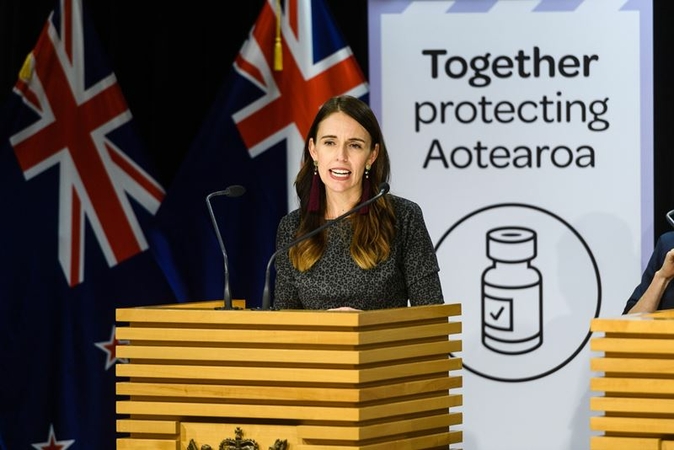 New Zealand Prime Minister Jacinda Ardern announces the upcoming restoration of unrestricted, two-way travel between neighbor Australia for the first time since the pandemic forced them to close their international borders more than a year ago. Ardern is photographed during a news conference in Wellington on April 6, 2021. MUST CREDIT: Bloomberg photo by Mark Coote

New Zealand has agreed to open a quarantine-free travel corridor with Australia in a major boost for its ailing tourism industry.

The so-called travel bubble will open on April 19, New Zealand Prime Minister Jacinda Ardern said Tuesday in Wellington. It will restore unrestricted, two-way travel between the two neighbors for the first time since the coronavirus pandemic forced them to close their international borders more than a year ago.

“The bubble will give our economic recovery a boost and represents a world leading arrangement of safely opening up international travel while continuing to pursue a strategy of elimination and keeping the virus out,” Ardern said. “We have worked hard to ensure travel is safe and that the necessary public health measures are in place.”

While the resumption of trans-Tasman travel will benefit the economies of both countries, New Zealand is a popular holiday destination for its much larger neighbor and stands to gain the most. Before the pandemic, Australian visitors accounted for a quarter of the revenue generated by foreign tourists. Ardern has nevertheless resisted pressure to open a bubble sooner, citing the risks of allowing covid-19 back into the community.

New Zealand and Australia are among the top performers in the global battle against the virus — New Zealand has consistently topped Bloomberg’s covid resilience ranking and Australia currently lies third. But both have also suffered sporadic outbreaks requiring regional lockdowns.

Brisbane, Australia’s third most-populous city, entered a three-day lockdown last week after the U.K. strain of the virus was discovered in the community.

One of the difficulties in establishing an international corridor between the two nations has been working out how to react when there are localized outbreaks at either end.

Ardern warned today that travelers should have contingency plans in place should an outbreak in Australia force a pause or suspension of the travel bubble and prevent them from returning on schedule. Visitors would need to abide by any local restrictions that are imposed, including lockdowns, and may need to enter quarantine on their return, she said.

“Quarantine-free travel will not be what it was pre-covid-19, and those undertaking travel will do so under the guidance of ‘flyer beware’,” Ardern said. “People will need to plan for the possibility of having travel disrupted if there is an outbreak.”

New Zealand virtually eliminated covid-19 from the community, allowing its economy to stage a V-shaped recovery from its initial slump. But it is now facing the prospect of a double-dip recession as the closed border decimates the tourism industry, once its biggest foreign-exchange earner.

The expected influx of Australians will be a huge relief for tourism operators, particularly in South Island ski resorts such as Queenstown as winter approaches. Before the pandemic, about 70% of overseas visitors to New Zealand ski-fields came from Australia, according to Tourism Industry Aotearoa.

“Surveys have shown there is pent-up demand for travel and Australians have no other options for international travel at present,” said TIA Chief Executive Chris Roberts. “But we anticipate that travelers on both sides of the Tasman will be cautious until they are comfortable with the health precautions being taken in both countries. We expect that people reuniting with family and friends will lead the way, followed by holidaymakers.”

Travel bubbles were proposed as pathway to a recovery in the early months of the pandemic, though they’ve largely failed to gain traction. New Zealand and Australia initially aimed to open a quarantine-free flight corridor in the middle of last year.

A travel bubble between Hong Kong and Singapore has also repeatedly been delayed, six months after it was proposed, because of additional waves of infections in Hong Kong.

Ardern said travelers from Australia will be on “green zone” flights, meaning there will be no passengers who have come from anywhere but Australia in the last 14 days.

“On arrival, passengers will be taken through what we call the green zones at the airport, meaning there will be no contact with those who are arriving from other parts of the world and going into managed isolation or quarantine,” she said.

The rollout of vaccinations may make corridors more workable. Australia’s government plans to set up quarantine-free travel to and from Singapore, and perhaps other countries, for those who’ve been inoculated. On March 17, the European Union gave the go-ahead for its own form of vaccine passport, a “Digital Green Certificate.”

The battered airline industry is pinning its hopes on such quarantine-free travel. As of late March, global commercial airline traffic was down 40% from pre-pandemic levels, according to FlightAware data.

New Zealanders were already able to travel to Australia without having to quarantine on arrival, but the necessity to enter a managed isolation facility for two weeks on their return home made it unattractive.