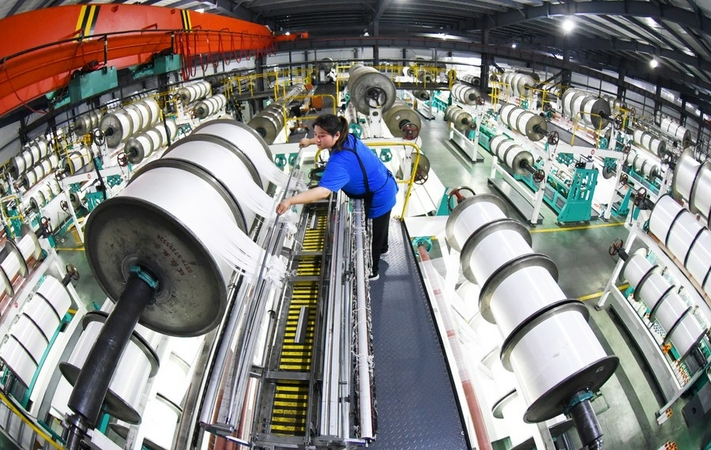 A worker is busy on the production line at the weaving workshop in an economy development zone in Lianyungang, Jiangsu province, on Oct 19, 2020. [Photo/Xinhua]

The International Monetary Fund on Tuesday predicted China’s economy to grow at 8.4 percent this year, which is 0.3 percentage point stronger than in its January forecast, while global growth is expected to reach 6 percent in 2021, a higher-than-expected recovery that could face “daunting challenges” ahead.

More than a year into the COVID-19 pandemic, high uncertainty is still hovering over the path of the health and economic crisis, with recoveries diverging “dangerously” within and across countries, but a way out is “increasingly visible” thanks to vaccines and policy support, the IMF said in its latest World Economic Outlook (WEO).

If compared with the October 2020 WEO, the projection for 2021 global growth would be 0.8 percentage point stronger, reflecting additional fiscal support in a few large economies and the anticipated vaccine-powered recovery in the second half of the year, according to the forecast.

For China, the upwardly revised estimate of 8.4 percent was also 0.2 percentage point higher than in the IMF’s forecast half a year ago. It forecast China’s growth to moderate to 5.6 percent in 2022.

The United States is projected to return to end-of-2019 activity levels in the first half of 2021 and expected to register a 6.4 percent growth rate for the year, according to the IMF forecast.

It pointed out that the Biden administration’s $1.9 trillion rescue package is expected to further boost US GDP over 2021-22, with significant spillovers to main US trading partners.

The US and China are two engines powering a “multi-speed recovery” from the pandemic crisis, well ahead of their pre-crisis GDP levels by the end of 2021, IMF Managing Director Kristalina Georgieva said last week.

However, the IMF said that global prospects remain highly uncertain, with much still depending on the race between the virus and vaccines, as greater progress with vaccinations can lift the forecast, while new virus variants that evade vaccines can lead to a sharp downgrade.

Recoveries would be uneven within and across countries, as economies with slower vaccine rollouts, more limited policy support and that are more reliant on tourism would not do as well, according to IMF’s Gopinath.

With losses in per capita GDP over 2020-24 relative to pre-pandemic forecasts projected at 5.7 percent in low-income countries and 4.7 percent in emerging markets, an additional 95 million people were expected to have entered the ranks of the extreme poor in 2020 compared with pre-pandemic projections, she noted.

For emerging market and developing economies, lockdowns and containment measures may be needed more frequently in 2021 and 2022 than in advanced economies, increasing the likelihood of medium-term scarring effects on the potential output of those countries, according to the IMF forecast.

“Considerable differentiation is expected between China — where effective containment measures, a forceful public investment response, and central bank liquidity support have facilitated a strong recovery — and others,” the WEO noted.

In her blog “Managing Divergent Recoveries”, Gopinath also wrote that while China’s economy had already returned to pre-pandemic GDP in 2020, many other countries are not expected to do so until 2023.

As to policy priorities for governments, the global lender said foremost is overcoming the immediate health crisis and returning employment to normal levels and then limiting the long-term impact of the crisis by limiting scarring, including from zombie firms, and reducing inequality — both within and across countries.

Zombie companies are often described as those that earn just enough money to operate but are too weakened to pay their debts.

Further ahead, the threat of climate change is ever more pressing, demanding bold action to limit emissions, particularly for the largest polluters, it said.

The IMF said strong international cooperation is vital for achieving those objectives and ensuring that emerging markets and low-income developing countries continue to narrow the gap between their living standards and those of high-income economies.

On the healthcare front, that means ensuring adequate worldwide vaccine production and universal distribution at affordable prices so that all countries can quickly and decisively beat back the pandemic, it said.

It noted that many pre–COVID-19 risk factors continue to be relevant. Tensions between the US and China remain elevated on numerous fronts, including international trade, intellectual property, and cybersecurity.

“Even while all eyes are on the pandemic, it is essential that progress be made on resolving trade and technology tensions,” the IMF said.