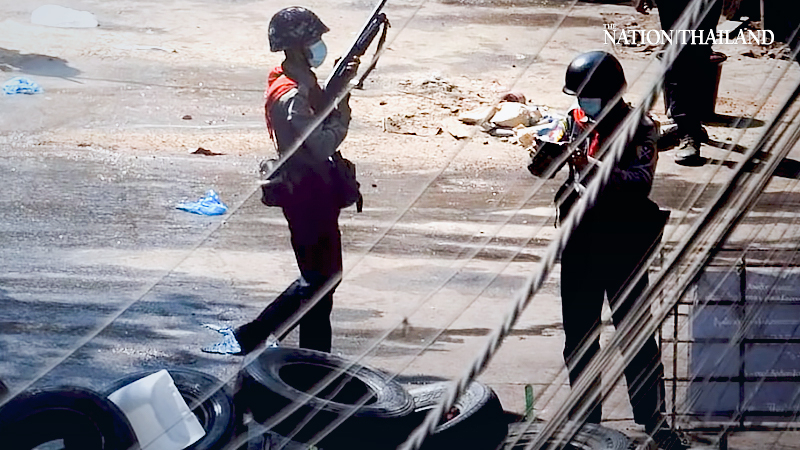 On Tuesday, protesters spilled metaphorical blood on the streets of Yangon, Myanmar’s biggest city. They sprayed and splashed red paint on roads, pavement and bus stops across town to mark the death toll exacted by security forces on demonstrators standing against the Feb. 1 coup carried out by the country’s junta. “The blood has not dried,” read one daubed message.

At least 570 people, including more than 40 children, have been killed in two months of unrest. More than 2,720 politicians, activists and civil society figures have been detained by authorities. At least 25 journalists are in detention, while others covering protests have been brutalized by state forces. On Tuesday, police and soldiers in Yangon carted off Zarganar, the country’s most well-known comedian, in an army vehicle on unspecified charges. In the past week, authorities issued arrest warrants for at least 60 artists, writers, thespians and other cultural celebrities accused of spreading information that supposedly endangered national stability.

The junta, which presides over a sprawling military apparatus and one of Asia’s largest armies, doesn’t have an answer for the leaderless anti-coup movement’s creativity and courage. Activists have developed a new pop-up economy to support fellow dissidents. They have built networks to smuggle defectors from the police out of the country. They have carried out themed “strikes” around Myanmar, laying flowers in public places where fellow demonstrators were killed or, as they did this Easter Sunday, carrying eggs painted with protest slogans and symbols.

Still, the resilience and determination of the protesters “is not unambiguously good news, because the military junta also will not give up, no matter the cost, leaving little hope of salvaging Myanmar’s political liberalization, economic reform, and development progress during a decade of civilian rule,” wrote Thitinan Pongsudhirak, an esteemed political scientist at Bangkok’s Chulalongkorn University. “Instead, the country faces the imminent threat of economic collapse, state implosion, and internal strife – perhaps even full-fledged civil war.”

As state authorities gunned down ordinary people gathering in the streets, more radical factions among the protesters are starting to embrace armed resistance. Improvised weaponry and tactical gear are appearing in pockets on protest front lines. The security forces “just shoot us. We don’t have anything. We just walk on [the] street with nothing in our hand and then they shoot us,” a Yangon activist who claims to have recently received training in a jungle camp told CNN. “It should be weapon and weapon, it should not be non-violence and then weapon. It became no choice for us.”

In a dramatic development, the anti-coup movement won the backing of multiple militia groups that claim to represent various marginalized ethnic minorities scattered around the country’s borderlands. For some in Myanmar’s big cities, the viciousness of the junta has awakened a newfound solidarity with communities long battered or neglected by the state.

“We were all brainwashed since we were very young,” Yin Yin, a Yangon resident from the country’s Bamar majority, told Foreign Policy magazine. “The military did countless dirty acts and cruel things in the past 70 years. The [non-Bamar] ethnic groups have fought and faced it, and now we are all facing it.”

While there are reinvigorated calls for a more egalitarian federalism in the country, the current reality is one of escalating conflict. The military is locked in clashes with ethnic armed groups on at least two fronts; government airstrikes on villages and suspected militia positions in southeastern Karen state have forced thousands to flee across the border with Thailand.

Though some Western governments imposed sanctions on the regime, they have little leverage over the junta. So far, the U.N. Security Council and the Association of Southeast Asian Nations, or ASEAN, the region’s main geopolitical bloc, have failed to muster any meaningful diplomatic response to what seems a spiraling crisis. The political instability that followed the coup led to rising fuel prices and, as a result, a spike in the cost of food – prompting the U.N.’s World Food Program to warn of the growing risk of food insecurity in parts of the country.

“Beyond being morally repugnant, the regime’s actions risk precipitating state collapse – where the generals may control the trappings of state but be unable to impose their will on the country as a whole, maintain order, or govern and deliver services effectively,” noted the International Crisis Group, a conflict watchdog, in its latest report on Myanmar. “Increasing levels of violence are hardening opposition and broadening a popular consensus that a return to military rule must be prevented at all costs. The banking system is hardly functioning, transport and logistics are crippled, and ports paralysed, sending the country spiralling into economic crisis.”

The junta, though, is more interested in trying to crush its perceived enemies – and the ethnic armed groups are a long-standing target. “It’s gloves off, it’s right back to the early 2000s when it was just a brutal war,” said Steve Gumaer, president of Partners for Relief & Development, which works in Myanmar’s borderland states. He added that, for all their defiance, neither the protest movement nor the rebel militias were “going to stop this army. Without external support, they really don’t have a chance.”