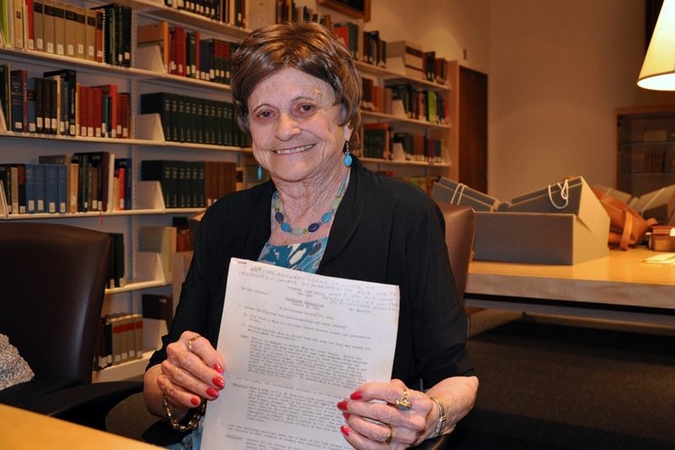 In March 1944, shortly before Joye Hummel graduated from the Katharine Gibbs secretarial school in Manhattan, she was invited to meet with one of her instructors, a charismatic psychologist who had been impressed by her essays on a take-home test.

Over tea at the Harvard Club, professor William Moulton Marston offered her a job – not in the classroom or psych lab, but in the office of his 43rd Street art studio. He wanted Hummel to help him write scripts for Wonder Woman, the Amazonian superhero he had created three years earlier and endowed with a magic lasso, indestructible bracelets, an eye-catching red bustier and a feminist sensibility.

Hummel, then 19, had never read Wonder Woman; she had never even read a comic book. But Marston needed an assistant. His character, brought to life on the page by artist H.G. Peter, was appearing in four comic books and was about to star in a syndicated newspaper strip. He was looking for someone young who could write slang and who, perhaps most importantly, shared his philosophy and vision for the character.

“You understand that I want women to feel they have the right to go out, to study, to find something they love to do and get out in the world and do it,” Hummel recalled his saying. She was “astonished and delighted” by the job offer, according to historian Jill Lepore’s book, “The Secret History of Wonder Woman,” and soon began writing for the comic. “I always did have a big imagination,” she said.

Hummel worked as a Wonder Woman ghostwriter for the next three years, long before any woman was publicly credited as a writer for the series. As invisible to readers as Wonder Woman’s transparent jet plane, she was increasingly recognized after Lepore interviewed her in 2014. Four years later, she received the Bill Finger Award, given to overlooked or underappreciated comic book writers at the Eisner Awards.

Hummel, who was known in recent years by her married name, Joye Murchison Kelly, died April 5 at her home in Winter Haven, Fla., a day after turning 97. Her son Robb Murchison confirmed the death but did not know the precise cause.

“Joye was absolutely a pioneer in bringing her own voice into these stories,” Lepore said in a phone interview. “She was then pretty much entirely forgotten. . . . I sort of think that people hadn’t bothered to find her. I called her up and said, ‘Are you the Joye Hummel who wrote Wonder Woman in the 1940s?’ She nearly dropped the receiver – she was delighted but surprised. It was a story she had told her grandchildren, but they didn’t believe her.”

A Wonder Woman comic and one of Ms. Hummel’s original scripts, from her archives before she donated them to the Smithsonian. MUST CREDIT: Robb Murchison

By the time Hummel started writing for Wonder Woman, the comics had an audience of 10 million readers. The character debuted in a 1941 issue of All-Star Comics, three years after Superman first lifted a car on the cover of Action Comics and two years after Batman leaped across the pages of Detective Comics.

Together, the three superheroes became linchpins of DC Comics, with Wonder Woman emerging as arguably the world’s most famous female superhero. She appeared on the cover of Ms. Magazine’s first issue (“Wonder Woman for President”), inspired a hit 1970s TV show starring Lynda Carter and was revitalized for the big screen beginning in 2016, played by Gal Gadot.

The character was “created by a whole series of women” who were never publicly credited, Lepore said. Marston – whose psychological research contributed to the development of the lie-detector test – received help from his wife, Elizabeth Holloway Marston, as well as their partner, Olive Byrne, the daughter of radical feminist Ethel Byrne and niece of birth-control activist Margaret Sanger. Both women worked behind the scenes, forming a fruitful creative triad and secret domestic arrangement: one husband, two wives.

After Hummel became the first woman hired to write for Wonder Woman, Byrne gave her a copy of Sanger’s book “Woman and the New Race,” which advocated for legalized birth control, and told her it contained everything she needed to know about the character.

Hummel at first typed Marston’s scripts before writing more than 70 scripts of her own, with detailed instructions for the artists. She developed stories that were often more innocent than her boss’s, which showed Wonder Woman fighting fascism while also being bound, tied, lassoed or gagged. Years later, she recalled that when she brought her scripts to editor Sheldon Mayer, “He always OK’d mine faster because I didn’t make mine as sexy.”

All of the early comics were published under a pseudonym, Charles Moulton, invented by Marston. Individual writers were credited in later anthologies by DC, which revealed that Hummel was behind some of the series’ more fantastical stories, involving beautiful mermaids and winged maidens. “They’re like fairy tales,” said cartoonist and historian Trina Robbins, who later worked on Wonder Woman.

Hummel stopped writing the comics in late 1947, shortly after she married, deciding to stay home and raise her stepdaughter. Marston had died earlier that year, and the series passed to writers who did away with much of the comic’s feminist messaging, including a regular centerfold feature chronicling the lives of influential women.

The changes infuriated Hummel, who remained loyal to Marston’s original vision of Wonder Woman as an emblem of free and courageous womanhood. Decades later, she wrote in an email to Lepore: “Even if I had not left because of my new daughter, I would have resigned if I was told I had to make [Wonder Woman] a masculine thinking and acting superwoman.”

Joye Evelyn Hummel was born April 4, 1924, and grew up on Long Island. Her son said that she rarely spoke of her upbringing; at various times, both of her parents apparently managed a grocery store chain.

After graduating from high school in Freeport, N.Y., she enrolled at Middlebury College in Vermont. She left after a year, later telling the comic magazine Alter Ego that her parents had divorced and she didn’t want to leave her mother alone.

Hummel joined the comics industry during a brief period in which female writers were not uncommon, according to Robbins, filling in for men who were fighting in World War II. When Marston was diagnosed with polio some five months after they started working together, she took on an increasingly significant share of the writing.

For the rest of their collaboration together, they met at his sprawling home in Rye, N.Y. His daughter Olive Ann served as a flower girl when Hummel married David Murchison, an Army veteran and home builder, in 1947.

After Murchison’s death in 2000, Hummel married Jack Kelly. In addition to her husband, of Winter Haven, and son, of Naples, Fla., survivors include a stepdaughter from her first marriage, Sally Boyd of Wellington, Fla.; two stepchildren from her second marriage, Kimberly Hallberg of Spring Hill, Fla., and Jeffrey Kelly of Oak Island, N.C.; five grandchildren; and six great-grandchildren. Her son David Murchison Jr. died in 2015.

Hummel donated her Wonder Woman archives to the Smithsonian Libraries in 2014. In interviews, she often downplayed her writing for the comics, describing it as a relatively small part of her life. Years after retiring from DC, for instance, she had gone back to work at age 40, taking a job as a secretary at a brokerage firm in Hollywood, Fla.

She later studied to become a stockbroker herself. “I believe Marston would feel proud of me,” she told the Florida magazine Haven in 2017, recalling the months of study it took to pass her certification exams and become registered on the New York Stock Exchange and Chicago Board of Trade. Doing so “enabled me to help finance the college education for my three children.”

As her son put it, “She was really a wonder woman.”