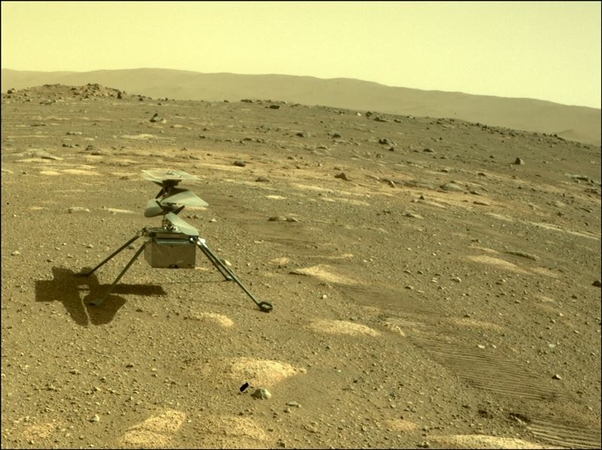 The NASA Perseverance rover reported this week on the weather from Mars’s Jezero Crater for the first time, providing data that will augment scientific understanding of the Martian atmosphere and inform future decisions about the rover’s mission.

The weather data will also help mission scientists decide when to launch Ingenuity, a drone-like helicopter that’s set to take flight as early as Sunday.

Perseverance, which was launched from Earth on July 30, arrived on Mars in mid-February and has been exploring the surface and collecting data.

Scientists say its weather will better shape what we know about radiative processes and the cycle of water in Mars’s atmosphere. There is not much of it, but water trapped beneath solid carbon-dioxide ice caps at the poles can be vaporized during the summertime and enter the atmosphere. Part of the plan with Perseverance is to unlock clues about what happens afterward.

Perseverance is in Mars’s Jezero Crater, a site NASA chose for the rover’s landing thanks to its wide expanses, free of obstacles, and the presence of a dried-up river delta from 3.5 billion years ago.

On April 3 and 4, the rover’s Mars Environmental Dynamics Analyzer, or MEDA, reported a high temperature of minus-7.6 degrees, and a low of minus-117.4 degrees. That rivals the coldest temperature measured on Earth – minus-128.6 degrees observed at the Vostok weather station in Antarctica on July 21, 1983.

The MEDA probes for temperature at four levels – the surface, 2.76 feet, 4.76 feet and 98.43 feet. While barely touching the surface of the lower atmosphere, the MEDA is expected to help offer insight into Mars’s radiation budget. In other words, scientists will learn how sunlight striking the surface is transformed into heat that enters and cycles through the atmosphere.

Perseverance is not the first spacecraft to send weather observations from the surface of Mars. Curiosity, which landed in 2011, suffered damage to one of its wind sensors. That meant that it could measure wind speed, but not wind direction. Because Perseverance can tell from which way the winds are blowing, scientists hope to use its observations in tandem with those of Curiosity and satellite measurements to learn about Mars’s general atmospheric circulation.

Arguably of greatest utility to scientists in the short term is the potential for Perseverance’s observations to inform mission-critical decisions, and ultimately when the famed Ingenuity helicopter will be tested. The helicopter was lodged in the underbelly of Perseverance, where it was stowed for the journey to Mars; on March 21, Perseverance shed the graphite debris shield that had protected Ingenuity during travel.

Ingenuity’s first flight is slated for no earlier than Sunday, a touch later than the original projection of Thursday.

Even if the helicopter is in full working order, flying on the Red Planet is no easy feat. The atmosphere, mostly made up of carbon dioxide, is barely 1% of Earth’s density. Helicopters on Earth cannot take off at high elevations because the air is too thin. Imagine that factor multiplied by 50 on Mars. NASA tested Ingenuity in vacuum chambers at its Jet Propulsion Laboratory in California.

That effect is acutely offset by Mars’s weaker gravity – about a third that of Earth. Still, working to construct a helicopter able to fly on Mars required years of engineering. Even the planet’s temperatures had to be taken into consideration; the extreme cold can “freeze and crack unprotected electrical components,” NASA wrote.

And before it can roam, NASA plans to conduct test flights to make sure everything is in working order. Just deploying the helicopter to its launchpad will take six days and four hours. During one of the final phases of deployment, Perseverance charged Ingenuity’s batteries before the cords were cut; then, the rover drove off, allowing sunlight to beam onto the helicopter’s solar panels to charge it.

During Ingenuity’s first test flight, its rotors will be spun at more than 2,500 revolutions per minute, and the helicopter will ascend through the thin atmosphere to just 10 feet. After hovering for up to 30 seconds, it will touchback down. NASA scientists will spend a few days gathering data and reviewing the flight’s performance before undertaking more complex endeavors in the future.

In the meantime, scientists will continue to await more detailed weather information from Perseverance and scope out an ideal airstrip for the helicopter. Ingenuity weighs only four pounds, its lightweight frame highly susceptible to even gentle winds.

Assuming an initial test flight does occur Sunday, NASA plans to host a live broadcast of the results early Monday.