Who will be Singapore’s next PM with Heng Swee Keat stepping aside? 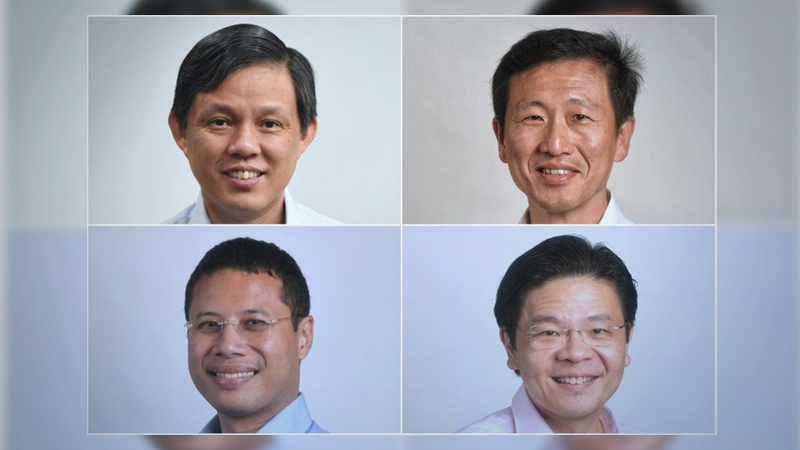 By Justin Ong
The Straits Times/ANN

SINGAPORE – With Deputy Prime Minister Heng Swee Keat announcing that he is stepping aside as leader of the People’s Action Party’s (PAP) fourth-generation team, the spotlight is now on who is likely to succeed him.

At a press conference on Thursday (April 8), the party’s 4G leaders said they would need more time to select another leader from among them.

All four sit on the PAP’s central executive committee, and were among the 4G leaders who attended the press conference at the Istana on Thursday.

Currently Minister for Trade and Industry and Minister-in-charge of the Public Service, Mr Chan joined politics in 2011 after 24 years in the Singapore Armed Forces, where he rose to become chief of army.

He was elected MP for Tanjong Pagar GRC and appointed Acting Minister for Community Development, Youth and Sports; and Minister of State for Information, Communications and the Arts.

Mr Chan was then promoted to full minister in 2013, and helmed the social and family development portfolio. He was also Second Minister for Defence then.

He has been deputy chairman of the People’s Association since 2015.

Mr Ong contested the 2011 general election as part of the PAP team in Aljunied that lost to the Workers’ Party.

He successfully ran for election in Sembawang GRC in 2015, and was appointed Acting Minister for Education (Higher Education and Skills). He was promoted to full minister the next year and made Second Defence Minister.

Mr Ong later helmed the full education portfolio. Now Transport Minister, he is concurrently a board member of the Monetary Authority of Singapore.

Prior to politics, he worked at Keppel Corporation and the National Trades Union Congress, and was chief executive of the Workforce Development Agency. He was principal private secretary to PM Lee from 2003 to 2005, and his press secretary before that.

Mr Wong, 48, is also a former principal private secretary to PM Lee. He then headed the Energy Market Authority before entering politics in 2011.

Now Minister for Education and Second Minister for Finance, he was made full minister in 2014 and has held positions in the defence; communications and information; national development; and culture, community and youth portfolios.

Mr Wong’s profile has risen due to his role in leading the Government’s pandemic response as co-chair of the multi-ministry task force on Covid-19, alongside Health Minister Gan Kim Yong.

He chairs the PAP Community Foundation and Singapore Labour Foundation, and sits on the boards of several organisations, including GIC and the Future Economy Council.

The youngest of the four is Mr Desmond Lee, who is Minister for National Development and Minister-in-Charge of Social Services Integration.

He moved to West Coast GRC for the 2020 general election.

Mr Lee co-chairs the Singapore Together movement that encourages people to partner the Government, as well as the Emerging Stronger task force charting the Republic’s post-pandemic economic recovery.

Before politics, Mr Lee, who is the son of former Cabinet minister Lee Yock Suan, served as a deputy public prosecutor and state counsel in the criminal justice division of the Attorney General’s Chambers. He also previously headed the Ministry of Health’s legal department and was Temasek’s in-house counsel.