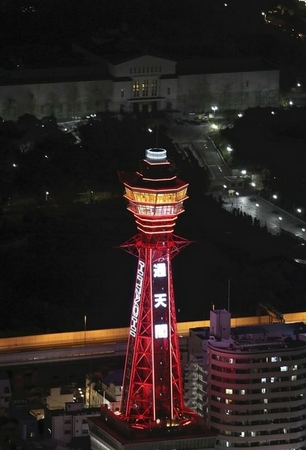 Tsutenkaku Tower is lit up in red in Osaka City on Wednesday after the Osaka prefectural government signaled a “red light,” the emergency level under its own coronavirus warning system. (The Yomiuri Shimbun)

Novel coronavirus variants are responsible for a growing number of infections in Osaka and Hyogo prefectures, and have spread to neighboring areas as well, an advisory body of the health ministry has warned.

The advisory body to the Health, Labor and Welfare Ministry said Wednesday that infections with the novel coronavirus have spread rapidly in Osaka and Hyogo prefectures, forcing their medical systems into a serious situation. Emergency-level priority measures have been put into effect in the two prefectures.

The advisory body further reported that new types of variants have been on the rise in Tokyo, Miyagi and other areas as well. It called for the public to take caution to prevent the spread of such variants, which are thought to be highly contagious.

The occupancy rate of hospital beds likewise climbed, with filled beds for seriously ill patients in Hyogo Prefecture reaching 63% of the assumed peak level. The benchmark for Stage 4 is 50% or more.

The increase in the number of variants has contributed to the spread of infections in the Kansai region.