A secretive body is making questionable Covid decisions in india

For a century, the Indian Council of Medical Research was a little known government body quietly studying illnesses in New Delhi. But during the pandemic, it has taken on a role akin to Anthony Faucis National Institute of Allergy and Infectious Diseases in the U.S. — a powerful position thats made it a controversial face of Indias struggles with Covid-19.

As the ICMR has acted as a key medical adviser to Prime Minister Narendra Modi and his health ministry, it has increasingly drawn criticism from the nation’s doctors and independent scientists, who have questioned its drug recommendations and the group’s lack of transparency on data related to variants identified in India that are now spreading globally.

India struggled to curb the world’s fastest coronavirus surge this summer, and public health experts are warning that the country is ill prepared to face a possible third wave of infections. Some of the ICMR’s decisions during the pandemic reflect the broad chaos that’s dogged India’s overwhelmed government apparatus, and have ended up benefiting the pharmaceutical industry rather than patients, critics say.

In April last year, physician SP Kalantri — who helps runs a 1,000 bed hospital in the village of Sevagram — wrote to the international scientific journal, The Lancet, strongly criticizing the ICMR for signing off on the health ministry’s decision to recommend the malaria drug hydroxychloroquine as a Covid therapy. The medicine remained on India’s virus guidelines for almost a year after the drug, once embraced by Donald Trump, was discarded as a treatment for Covid in the U.S.

Kalantri’s hospital in Sevagram, a village once home to Mahatma Gandhi, refused to prescribe that and other unproven treatments. Desperate patients, however, simply sought them out elsewhere, he said.

“Countrywide, the doctors started writing these prescriptions, which artificially inflated the cost for Covid management,” said Kalantri, director professor of medicine at Sevagram’s Mahatma Gandhi Institute of Medical Sciences. “Big Pharma was laughing all the way to the bank and ultimately the one who suffered was the poor patient — it’s where the science failed in India.”

Numerous therapies initially looked promising and the ICMR’s guidelines are constantly evolving as trial evidence emerges, said Aparna Mukherjee, a New Delhi-based senior scientist at the ICMR. “It’s very easy to criticize when something is put forward,” she said in an interview. “When you know there is some possibility that this drug might work, then just because it is in shortage you cannot say don’t use it.” Like other Indian government health agencies, the ICMR has been “stretched thin” during the pandemic, Mukherjee said. Spokespeople for the ICMR and the Ministry of Health and Family Welfare didn’t respond to requests for comment.

Yet criticisms of the ICMR don’t stop there. Over the past year, the government and the ICMR have also been accused of withholding data about Covid and its variants that left physicians in the country flying blind, and of promoting a homegrown vaccine before it had passed key clinical trials. Public health experts say that it isn’t clear how the ICMR decides which Covid drugs to back, and have complained that the agency hasn’t fully disclosed how much funding it provided for the local shot.

Such moves have made the ICMR emblematic of India’s struggles with Covid, exemplifying problems in the country’s social and political fabric that existed for decades and lingered under Modi — from a lack of transparency to the underfunded health-care system.

India’s government needed “better evidence making and policy advice from the ICMR,” said Shahid Jameel, a virologist who resigned in May as chair of the advisory panel of a state Covid genome-sequencing panel after criticizing India’s response to the pandemic. The ICMR has also drawn criticism on social media from scientists and health care advocates for its decision making and recommendations, at times attracting attention overseas.

“The Indian Council of Medical Research has been singled out by experts for straying from scientific evidence, appearing at worst politically motivated and at best overly optimistic,” an editorial in the Lancet said in September 2020, discussing the dangers of the “false optimism” that India’s government was projecting even as virus cases continued to rise.

The pandemic has killed more than 400,000 people in India, numbers that experts say are vastly undercounted. As infections surged this summer, hospitals ran short of life-saving oxygen and some patients died in the streets. This month, India’s federal health minister, Harsh Vardhan, resigned amid a broad cabinet reshuffle by Modi, whose popularity has taken a hit over the government’s handling of the pandemic. But the ICMR hasn’t changed.

Headquartered in New Delhi, opposite India’s parliament, the ICMR was set up in 1911 by British colonial rulers and was traditionally focused on research. Covid-19 thrust the organization into the uncharted waters of actually managing an outsized viral outbreak.

In past epidemics, India’s National Centre for Disease Control — which has several infectious disease experts on its board — has played a bigger role. Yet the ICMR has become the more public face of India’s response to Covid-19, a development some scientists questioned. Sujeet Kumar Singh, the director general of the NCDC, didn’t respond to an interview request. 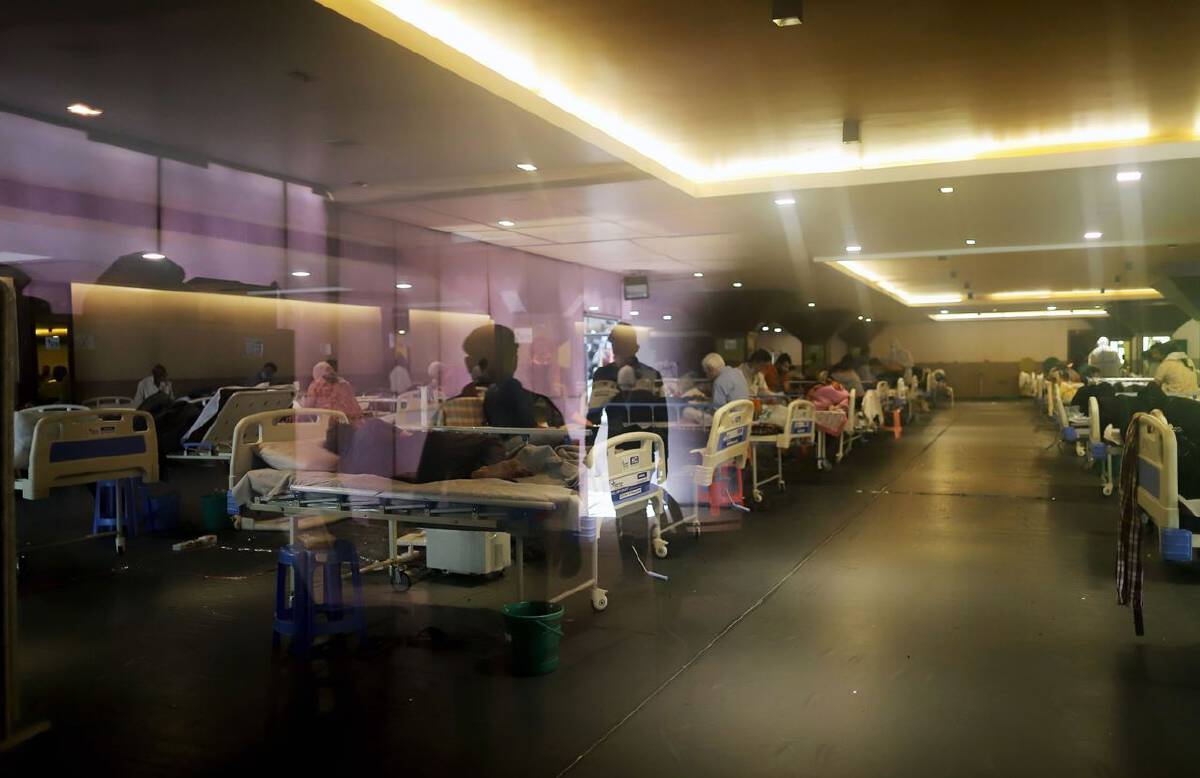 A secretive body is making questionable Covid decisions in india

ICMR’s Mukherjee acknowledged that the ICMR’s remit had widened during the pandemic and said that was due to the “need of the hour.” It’s taken on added responsibilities such as testing and procurement of diagnostic equipment, she said.

Funded through the health ministry, the organization has a budget of 23.5 billion rupees ($316 million) this year and backs hundreds of scientist fellowships. ICMR-linked researchers published more the 800 papers in Indian and international journals, according to its last annual report.

Since 2018, it’s been headed by Balram Bhargava, a cardiolologist. The ICMR has several experts focused on diseases like malaria that have traditionally been India’s biggest public health concerns, but few virologists work for the agency. Bhargava didn’t respond to multiple requests for an interview.

With its states easing lockdowns despite only about 6% of the population being fully vaccinated, India is at risk of new waves of infection. But experts question whether India’s health network will be better prepared when the next resurgence comes.

“There is a distinct uneasiness in the scientific community on the government’s handling of the pandemic” and the “opaqueness of the process of consultations, consensus building, data sharing, and decision making,” said Lalit Kant, who headed the ICMR’s epidemiology and communicable diseases division for 13 years until 2011. “If we want the third wave to be managed appropriately then we need evidence-based insights.”

In April, almost 300 Indian scientists and medical researchers appealed to Modi to allow them access to data that could help study, predict, and curb the spread of the coronavirus. While the ICMR has data on all Indians who’ve been tested for Covid so far, it restricts access, they say.

“The ICMR database is inaccessible to anyone outside of the government and perhaps also to many within the government,” the scientists wrote. “While new pandemics can have unpredictable features, our inability to adequately manage the spread of infections has, to a large extent, resulted from epidemiological data not being systematically collected and released in a timely manner to the scientific community.”

The ICMR conducted some of the most comprehensive serological surveys last year, including studying the presence of antibodies in various groups. It has also recently published research on mortality rates during the country’s recent devastating second wave. Scientists outside of the government system have said they haven’t had access to this data.

This gatekeeping of crucial information on the genomic makeup of local virus strains, testing and immune response to vaccines has left India flying blind as it contends with the new and highly infectious delta variant, which was first identified in the South Asian country and is now spreading worldwide, say some researchers.

“Granular data on antibody surveys, clinical severity of disease, demographics, etc., has not been made available in the public domain,” said Jameel, the Indian virologist. “Open data would have allowed better modeling, better preparation and perhaps saved lives.”

Mukherjee at the ICMR said there aren’t constraints on data and anyone with a proper proposal can access it, though she didn’t elaborate on what criteria they needed to meet.

The ICMR’s work with local company, Bharat Biotech International, on a homegrown Covid vaccine, has also drawn criticism from the scientific community. Earlier this year, the shot, called Covaxin, was approved by India’s government for emergency use before final trials were completed, a move doctors and public health experts said was premature and fueled widespread hesitancy.

While approvals in India are handled by the drug regulator, the ICMR helped finance the vaccine’s development, although it has not publicly said how much funding it provided. The company, India’s government and the ICMR have been further criticized for not making the details of the intellectual property rights to Covaxin public. Bharat Biotech in a statement last month said it will pay unspecified royalties to the ICMR and India’s National Institute of Virology.

Bharat Biotech and the ICMR have published studies showing potentially encouraging results on the vaccine’s effectiveness against new variants. However, because the papers have been authored by officials from the company and agency, scientists have pointed to conflict of interest issues.

Mukherjee from the ICMR declined to comment on the funding and intellectual property rights around Covaxin, but said final trial efficacy data should be published soon in a peer-reviewed journal, which was reiterated by a spokesperson for Bharat Biotech.

Back on the frontlines of the pandemic in Sevagram, Kalantri is mainly concerned about the poor in rural areas, some of whom went into debt buying medicines. Prices of some drugs — such as Remdesivir, which was added to India’s guidelines in March 2020 — soared more than tenfold on the black market.

Remdesivir is approved and used as a Covid treatment in the U.S. and elsewhere, but the World Health Organization has said there isn’t enough evidence to back it as therapy because the drug hasn’t been shown to improve survival in patients.

Its widespread use in India was particularly devastating because many had to pay for it out of pocket in a country where few have medical insurance and average incomes are less than $160 a month. Experts and bodies including the All India Drug Action Network, an umbrella group of non profits advocating drug access in India, have been critical of India’s continued advocacy of Remdesivir.

Gilead Sciences Inc., which makes Remdesivir, didn’t respond to a request for comment. ICMR’s Mukherjee said there was little the agency could do about price increases that arose in the black market.

Convalescent plasma therapy, too, remained on the list for months despite the ICMR’s own studies in November finding little benefit. Until late June, the health ministry’s guidelines also recommended Ivermectin, an anti-parasitic treatment that was untested against Covid, even though the WHO discouraged its use as far back as March 2021.

“I’m very sad and disappointed,” Kalantri said about the ICMR.

Meanwhile, even with the coronavirus at its peak in India this summer, an index of local pharmaceutical stocks advanced 21% this year and Alliance Bernstein estimates that drugmakers’ sales volumes surged 36% in May from a year earlier due to Covid-related demand.

The pandemic has shown up India’s failure to strengthen medical bodies that are “weak and functioning sub-optimally,” said Chandrakant Lahariya, a New Delhi-based epidemiologist and public health expert who has co-authored a book on the nation’s battle against Covid.

“It is not merely about the Covid-19 pandemic response, but also about preparing Indian institutions for the future,” Lahariya said. “That opportunity seems to have been lost.”