“As a caretaker and committed cabinet has been announced by authorities of the Islamic Emirate to control and run affairs of the country which will start functioning at the earliest (time possible), I assure all countrymen that the figures will work hard towards Islamic rules and Sharia law.”

In a statement following the announcement, the Taliban’s supreme leader, Haibatullah Akhundzada, said the urgent task would be to carry out reconstruction and rehabilitation, and the country would seek “strong and healthy relations” with its neighbors and all other countries.

Amir Khan Muttaqi was appointed as acting foreign minister, and Sarajuddin Haqqani, son of the founder of the Haqqani network, a Taliban-linked group, was named acting interior minister, the spokesman said.

Mujahid said the appointments were not final as these were acting positions, and the remaining posts would be announced later.

The move was aimed at carrying out “necessary government works,” the spokesman said without elaborating on how long the caretaker government will serve.

In his first statement issued since the Taliban’s takeover of Kabul in mid-August, Akhundzada, its supreme leader, said the newly formed caretaker government would start functioning soon.

“As a caretaker and committed cabinet has been announced by authorities of the Islamic Emirate to control and run affairs of the country which will start functioning at the earliest (time possible), I assure all countrymen that the figures will work hard towards Islamic rules and Sharia law,” Akhundzada said. 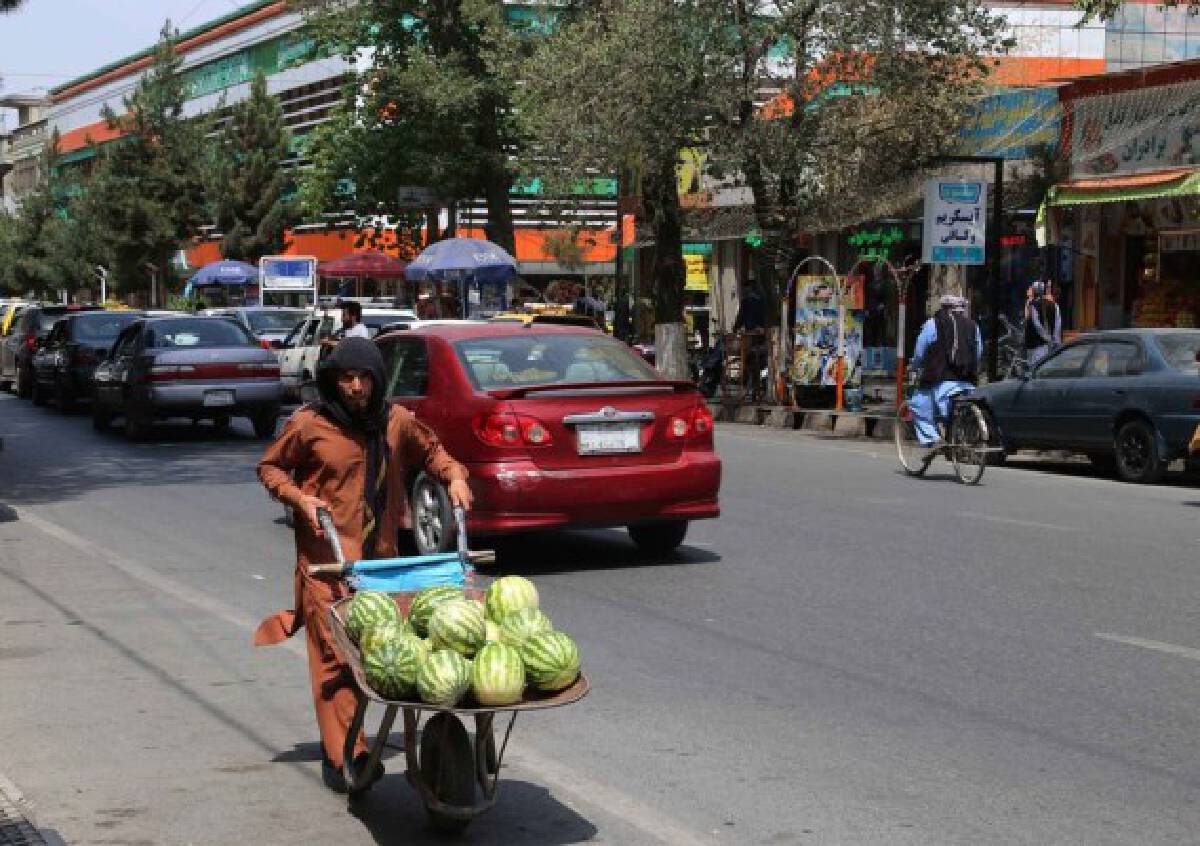 An Afghan man pushes a handcart on the street in Kabul, capital of Afghanistan, Aug. 31, 2021.

He noted that the ultimate goal would be to get Afghanistan back on its feet as quickly as possible, and efficiently carry out reconstruction and rehabilitation work in the war-torn country.

“We want strong and healthy relations with our neighbors and all other countries based on mutual respect and interaction,” Akhundzada said in the statement.

He added that the Afghan soil would not be used against the security of any other country, and foreign diplomats, humanitarian agencies and investors should carry out their work in Afghanistan with “peace of mind.”

In 2001, U.S.-led military forces invaded Afghanistan under the pretext of searching for Osama bin Laden, the alleged mastermind of the Sept. 11 terror attacks.

Over the past two decades, the war has caused more than 40,000 civilian deaths, and turned about 11 million people into refugees. The safety and livelihood of ordinary Afghans, who are now anxiously craving peace and stability, were severely impaired by the chronic fighting.

The announcement of the caretaker government’s founding “is another step toward peace and prosperity of Afghanistan,” Basir Faqiri, a Kabul resident, told Xinhua on Tuesday night.

“Now I am trying to reopen my shop and restart my small business in Kabul. I hope the Taliban soon find some solutions to political and economic uncertainty,” he said. “I know Afghans are witnessing difficult days recently, but I am sure we will overcome the difficulties soon.”

In his statement, Akhundzada told Afghans that “We want to have a peaceful, prosperous and self-reliant Afghanistan, for which we will strive to eliminate all causes of war and strife in the country, and (allow) our countrymen to live in complete security and comfort.”

For this war-battered nation, however, reconstruction requires both time and strenuous efforts. According to the latest figures of the United Nations, almost half of Afghanistan’s population, or 18 million people, are in need of humanitarian assistance to survive.

“We enjoy a peaceful environment in at least 90 percent of Afghanistan after the Taliban takeover,” said Bushra Parnian, a student at Kabul University, adding that many people in this country were still suffering from shortages of food, medicine and other daily necessities.

Afghan people are seen on Afghan side of the border near the border crossing point of Torkham between Pakistan and Afghanistan on Sept. 5, 2021.

The United Nations will assist the fledgling Taliban government in paving the way for international aid delivery in war-torn Afghanistan and the rights of women and girls, said UN Undersecretary-General for Humanitarian Affairs Martin Griffiths during a meeting with Mullah Baradar and the Taliban leadership on Tuesday.

“The movement we face here today, as many, many other people have told me, is not the movement that we saw (in 1998),” said the UN relief coordinator. “It certainly has links in ideology but it’s different to the one then.”

Also on Tuesday, Griffiths’ Office for the Coordination of Humanitarian Affairs (OCHA) issued a consolidated 606-million-U.S.-dollar Flash Appeal with an aim to help relieve the country’s “humanitarian crisis.”

Basic services in Afghanistan are collapsing and food and other life-saving aid are about to run out, OCHA said.

UN Secretary-General Antonio Guterres has warned of a looming humanitarian catastrophe, and will host a high-level meeting next Monday in Geneva on the humanitarian situation in Afghanistan.

The United States said there is no rush to recognize the Taliban government. White House press secretary Jen Psaki said Tuesday that Washington’s recognition would be dependent on the Taliban’s actions.

During a recent visit to Qatar, U.S. Secretary of State Antony Blinken said the Taliban were honoring promises to allow Afghans to freely depart from Afghanistan.

“We’ve been engaged with the Taliban, including in recent hours. They’ve said that they will let people with travel documents freely depart,” said Blinken.

The Kremlin on Tuesday said that Russia has not made any decisions on the recognition of the Taliban government and will “very carefully” monitor the situation in Afghanistan.

The Chinese Foreign Ministry said Wednesday that China attaches importance to the Taliban’s announcement of the formation of the caretaker government and some important personnel arrangements.

“This ended the more than three weeks of anarchy in Afghanistan and is a necessary step toward Afghanistan’s restoration of order and post-war reconstruction,” Foreign Ministry spokesperson Wang Wenbin told a press briefing.

An Afghan child waits to cross border at the border crossing point of Torkham between Pakistan and Afghanistan on Sept. 5, 2021.