Foreign Minister Shah Mahmood Qureshi on Friday said that Pakistan wants broad-ranging, long-term and stable relations with the United States to promote economic cooperation and establish peace in the region.

He made the comments during a meeting with US Deputy Secretary of State Wendy Sherman who is on a two-day visit to Pakistan. The two sides discussed bilateral relations, Afghanistan and the regional situation during the meeting, according to a statement from the Foreign Office.

Qureshi stressed that a proper dialogue between the two countries was “necessary” for mutual benefit of the US and Pakistan as well as the promotion of regional objectives, the FO statement said.

The foreign minister said Pakistan and US had similar perspectives and stressed the importance of a peaceful solution to the situation in Afghanistan.

He further said Pakistan hoped the interim Taliban government in Afghanistan would work for the betterment of all Afghan citizens alongside peace and stability.

“A representative and inclusive [Afghan] government can be a trustworthy partner for the international community. In the current situation, there is a need for proper steps by the international community to ensure positive inclusion, provision of humanitarian aid and financial resources [to set up] a stable economy to solve the problems of the Afghan public,” the statement quoted Qureshi as saying.

The foreign minister also stressed on a solution to the Kashmir dispute for lasting peace and stability in the South Asian region while apprising the US delegation of the human rights violations in Indian-occupied Kashmir.

He also thanked the US deputy secretary of state for the country’s donation of Covid-19 vaccines to Pakistan.

Meanwhile, Sherman offered condolences on the lives lost in the earthquake in Balochistan’s Harnai district a day earlier.

She also appreciated Pakistan’s efforts to evacuate foreign citizens from Afghanistan as well as its efforts for regional peace, the FO statement said.

The US official also praised the progress in talks between the US and Pakistan on climate change and alternate sources of energy.

The meeting was also attended by US Assistant Secretary of South and Central Asian Affairs David Lu and Foreign Secretary Sohail Mahmood.

In a tweet later in the day, Sherman said she discussed Afghanistan’s future and the important and long-standing US-Pakistan relationship with Qureshi during the meeting.

“We look forward to continuing to address pressing regional and global challenges,” she added.

According to a statement released by the Inter-Services Public Relations (ISPR), matters of mutual interest, the regional security situation and collaboration in humanitarian measures in Afghanistan were discussed. 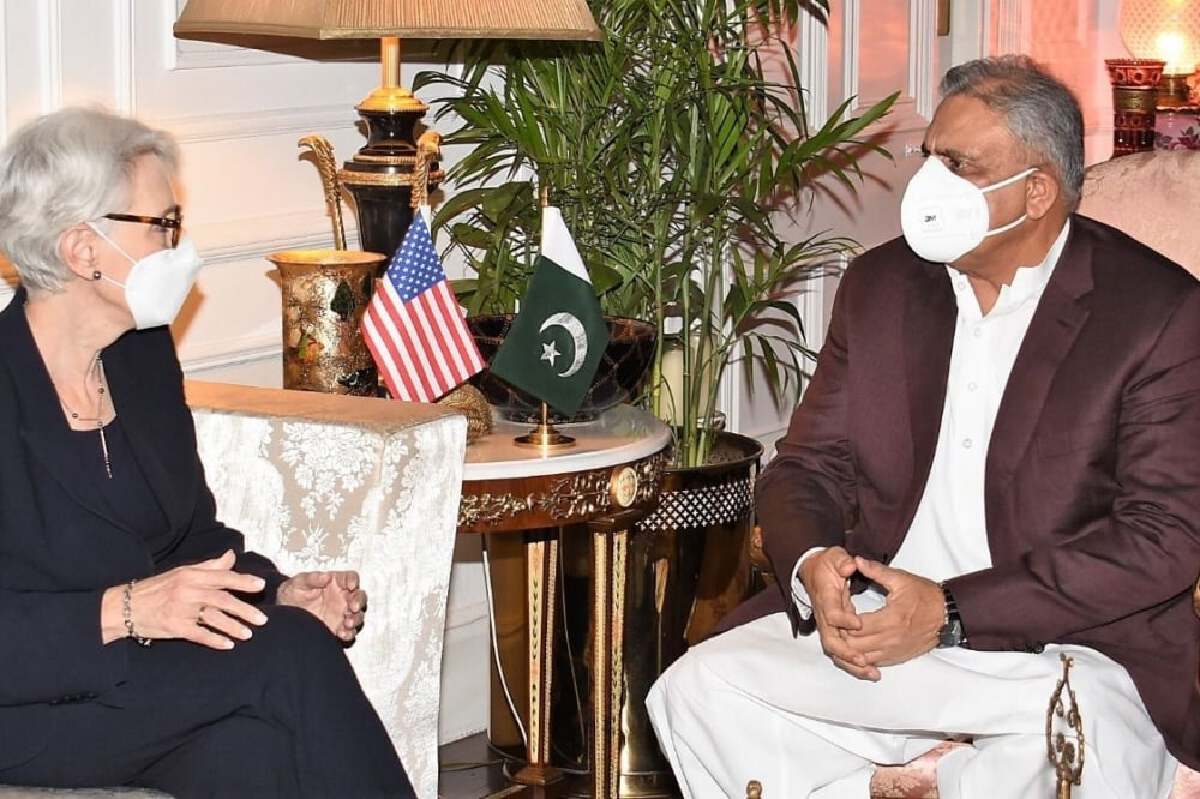 “The COAS said that Pakistan is committed to making all-out efforts for peace and stability in Afghanistan and supports an all-inclusive Afghan government,” the statement said.

He also emphasised the need to maintain meaningful bilateral engagement for an enduring multi-domain relationship between the two countries.

The visiting dignitary appreciated Pakistan’s role in the Afghan situation, specially the assistance in successful evacuation operations and pledged to continue working with Pakistan for regional peace, the statement said.

A day earlier, National Security Adviser (NSA) Moeed Yusuf, in a meeting with the US deputy secretary of state, stressed that the international community “must maintain contact” with the interim Taliban government in Afghanistan.

According to a report by Radio Pakistan, during the meeting both sides expressed the desire to promote bilateral relations between the United States and Pakistan.

They also discussed economic cooperation as well as the security situation in the region, it added.

According to the report, the US delegation appreciated Pakistan’s efforts to evacuate foreigners from Afghanistan and the help it extended to Afghan refugees.

In his remarks, Yusuf said that blatant human rights violations in Indian-occupied Kashmir also posed a threat to regional peace.

Sherman and her seven-member team arrived in Islamabad on Thursday for a two-day visit to the country.

She had earlier visited India for a series of bilateral meetings, civil society events, and the India Ideas Summit.

Sherman is the senior-most official in the State Department after Secretary of State Antony Blinken.

She is the highest-ranking US visitor to Pakistan under President Joe Biden since the Taliban’s victory in Kabul.

“The visit is taking place at a very critical time, both in the context of Afghanistan and developments in the wider region,” said a senior diplomatic source when asked to explain why Islamabad sees this as an important visit.

The source pointed out that the Biden administration did “not seem to be reluctant to travel to both India and Pakistan in one go, which was the case in the past”.

“This is an important visit, and we look forward to engaging with Deputy Secretary Sherman,” Pakistan’s US Ambassador Asad Majeed Khan earlier told Dawn. “Together, we would explore ways to strengthen and expand our bilateral cooperation in areas of mutual interest and concern.”

According to sources, the Biden administration is focusing on four major points in its talks with Pakistan — recognition of the Taliban government in Kabul, international sanctions on Afghanistan, access to Afghanistan and counter-terrorism cooperation.

The sources say that the United States does not want Pakistan to recognise the Taliban regime before the rest of the international community. Instead, it wants Pakistan to continue its efforts for softening the Taliban position on controversial issues, such as inclusive governance, human rights, girls’ education and allowing women to work.

“We seek a strong partnership with Pakistan on counterterrorism and we expect sustained action against all militant and terrorist groups without distinction,” Sherman had told reporters last week ahead of the visit.

“Both of our countries have suffered terribly from the scourge of terrorism and we look forward to cooperative efforts to eliminate all regional and global terrorist threats,” she had said.