The World Justice Project (WJP) today released the WJP Rule of Law Index® 2021, which evaluates rule of law in 139 countries or jurisdictions. The report is the first in this annual series issued since the COVID-19 pandemic was declared in March 2020, and it shows multi-year negative trends worsening during this period.

“With negative trends in so many countries, this year’s WJP Rule of Law Index should be a wake up call for us all.” said WJP Co-Founder and CEO Bill Neukom. “Rule of Law is the very foundation of communities of justice, opportunity and peace. Reinforcing that foundation should be a top priority for the coming period of recovery from the pandemic.”

The WJP Rule of Law Index® is an annual report based on national surveys of more than 138,000 households and 4,200 legal practitioners and experts around the world. The WJP’s framework for the rule of law covers eight factors:

Rule of Law in Thailand

Thailand’s overall rule of law score decreased 2.2% in this year’s Index. At 80th place out of 139 countries and jurisdictions worldwide, Thailand fell two positions in global rank. Thailand’s score places it at 10 out of 15 countries in the East Asia and Pacific region* and 22 out of 40 among upper-middle-income** countries.

In the last year, 11 out of 15 countries declined in East Asia and the Pacific. Of those 11 countries, 5 had also declined in the previous year. 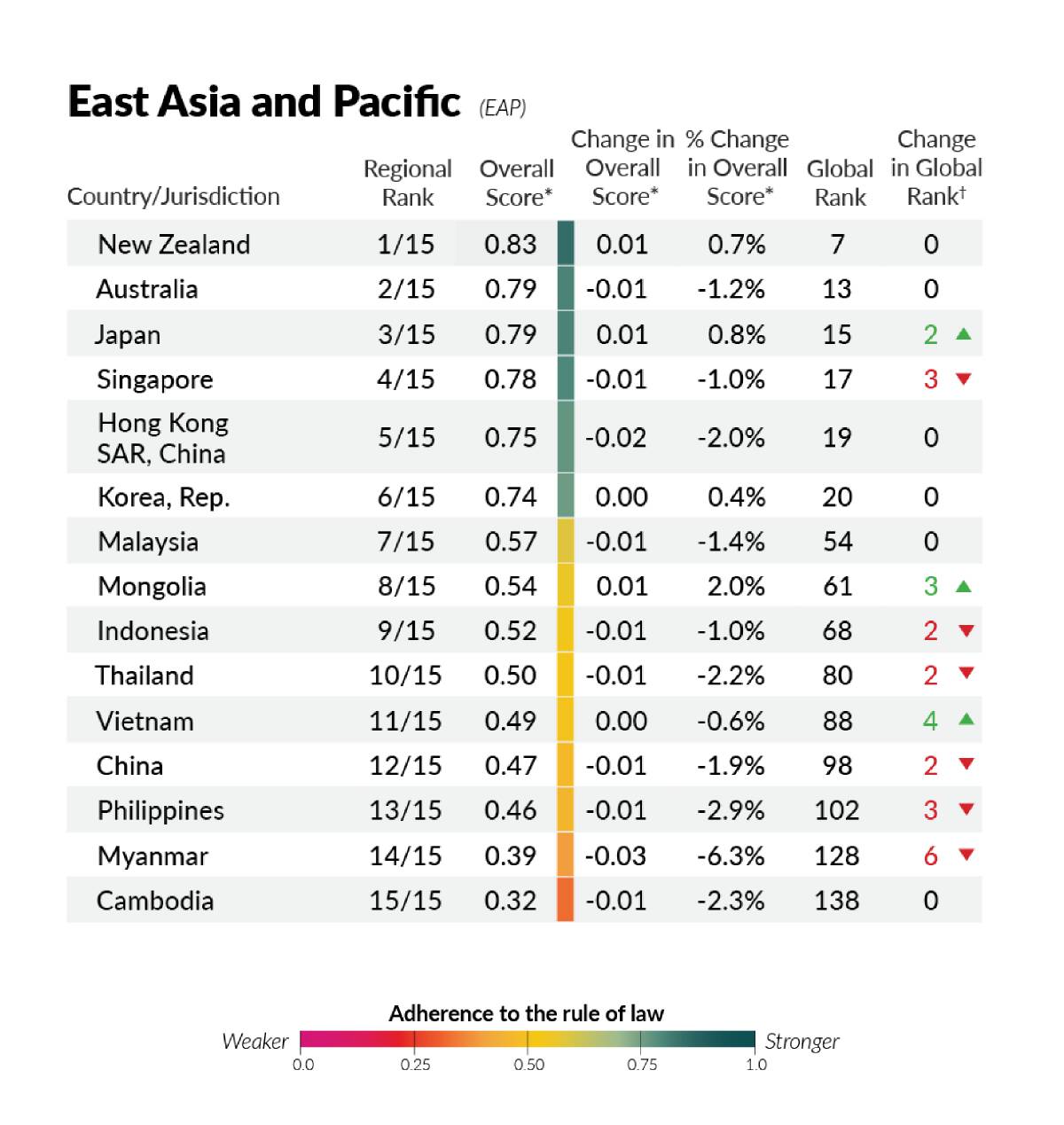 Thailand ranked 80 out of 139 countries on rule of law, dropping two positions

Rule of Law Around the World

The 2021 Index shows that globally more countries declined than improved in overall rule of law performance for the fourth consecutive year.

The declines were widespread and seen in all corners of the world. For the second year in a row, in every region, a majority of countries slipped backward or remained unchanged in their overall rule of law performance. Thailand ranked 80 out of 139 countries on rule of law, dropping two positions

The top three performers this year were Denmark, Norway, and Finland. The Democratic Republic of the Congo, Cambodia, and Venezuela, RB had the lowest overall rule of law scores.