“In Forever Is Now exhibition, I believe Forever refers to the Great Pyramids with their magnificence and antiquity, and Now signifies temporary art,” said Ahmed Obied, assistant minister of tourism and antiquities.

Egypt launched on Thursday the first international art exhibition at the Great Pyramids of Giza and their surrounding plateau with the participation of artists from Egypt and other countries.

The event “Forever Is Now” is organized by Art D’Egypte company, an Egyptian platform for art and heritage, under the auspices of Egypt’s Ministry of Tourism and Antiquities and Ministry of Foreign Affairs as well as the patronage of the United Nations Educational, Scientific and Cultural Organization (UNESCO).

“Today, we see a mix between the Egyptian civilization and contemporary art around the world. This is surely very important because it represents exchanges among cultures and dialogues between contemporary artists and our civilization,” said Nadine Abdel-Ghaffar, founder of Art D’Egypte.

The international gallery features the sculptures and artworks of the artists in open space around the pyramids. 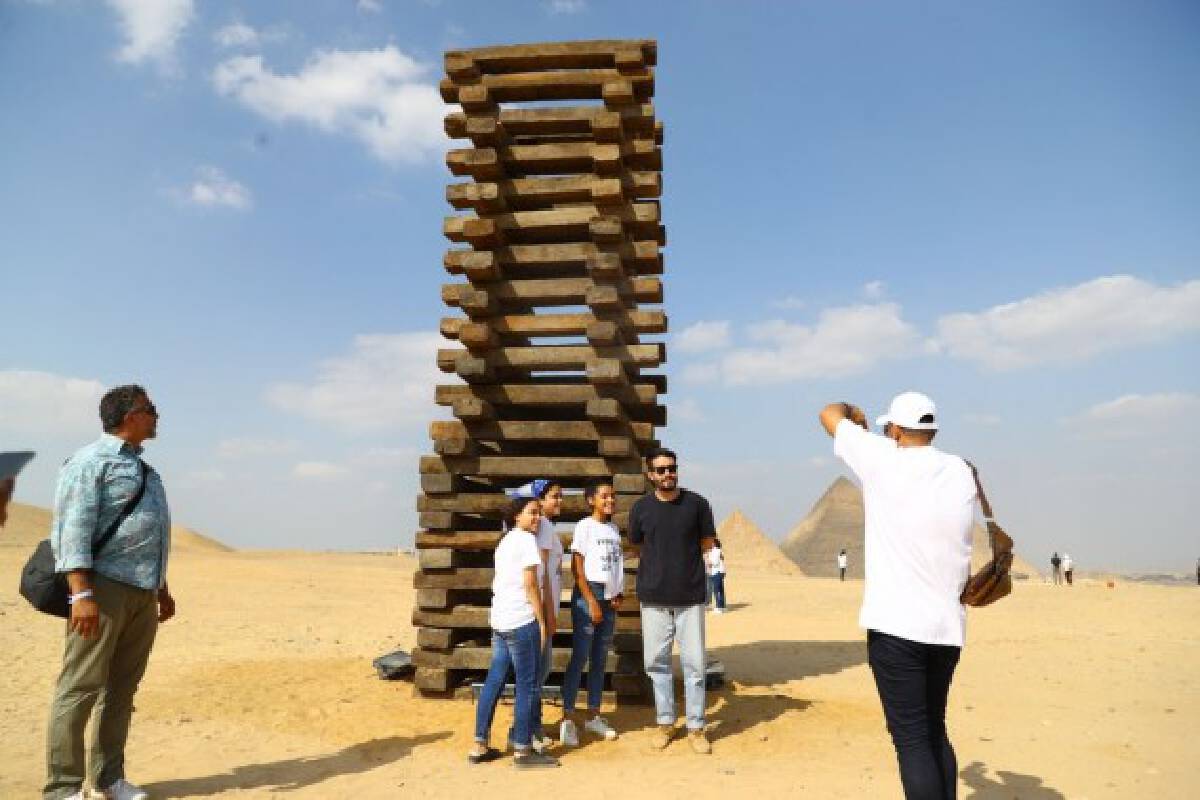 Visitors pose for photos with an artwork during an international art exhibition in Giza, Egypt, on Oct. 21, 2021. (Xinhua/Ahmed Gomaa)

Abdel-Ghaffar noted that it is a new experience to hold such an open-air art exhibition in Egypt and her team ensured preserving the archeological site while installing the sculptures of the artists, which took more than a year of preparation.

“The exhibition is a message of hope for humanity, particularly amid COVID-19 pandemic while many countries impose lockdowns,” she told Xinhua.

Among the displayed works is a sculpture made of stainless steel rods entitled “Together” by Italian artist Lorenzo Quinn, which features two hands rising and touching each other by the tips of fingers to symbolize communication.

The Great Pyramids of Giza can just be seen in a distance behind Quinn’s work. “I am very lucky to have the three pyramids behind my sculpture. The position of the hands touching each other like this also looks like a pyramid shape, which is why I made the hands this way,” the sculptor explained in front of his work.

He noted that he used stainless steel wire mesh with 36,000 welding points and the work took him nine months.

Another work was from Egyptian artist Moataz Nasr, which shows dozens of paddles of a solar boat crossed in X shape to form a 14-meter-long boat-like structure, with a lower passage where visitors can walk in and face a kind of a bottleneck while going through.

“The piece is entitled ‘Barzakh,’ which means a divide, or a spot between two different worlds like life and death, day and night or black and white, while a solar boat for ancient Egyptians was meant to take them from this world to the afterlife,” the Egyptian artist explained.

Meanwhile, opposite to one of the pyramids, two British artists Edward Shuster and Claudia Moseley teamed up to present their joint work “Plan of the Path of Light.”

It is a number of hand-bonded optical glass figures with steel bases, one of which looks like a glass pyramid.

Behind the abstract simplicity of the forms is a matrix of symbolic angles, measures and orientations, inspired by the optico-geometric magic of the Great Pyramid, the two artists said.

“We tried to take all the symbolism and cosmic mathematics of the pyramids and include them in this new contemporary form,” Shuster told Xinhua.

“In ‘Forever Is Now’ exhibition, I believe ‘Forever’ refers to the Great Pyramids with their magnificence and antiquity, and ‘Now’ signifies temporary art,” Ahmed Obied, assistant minister of tourism and antiquities, told Xinhua at the pyramids plateau.

Photo taken on Oct. 21, 2021 shows an artwork in front of the Pyramid of Khafre during an international art exhibition in Giza, Egypt. (Xinhua/Ahmed Gomaa)