# 5pm: Protest leaders say negotiations can always solve problems, as they thank the police for understanding them. Women come forward to lead the crowds as a sign of empowerment and say they will deliver flowers to the authorities. 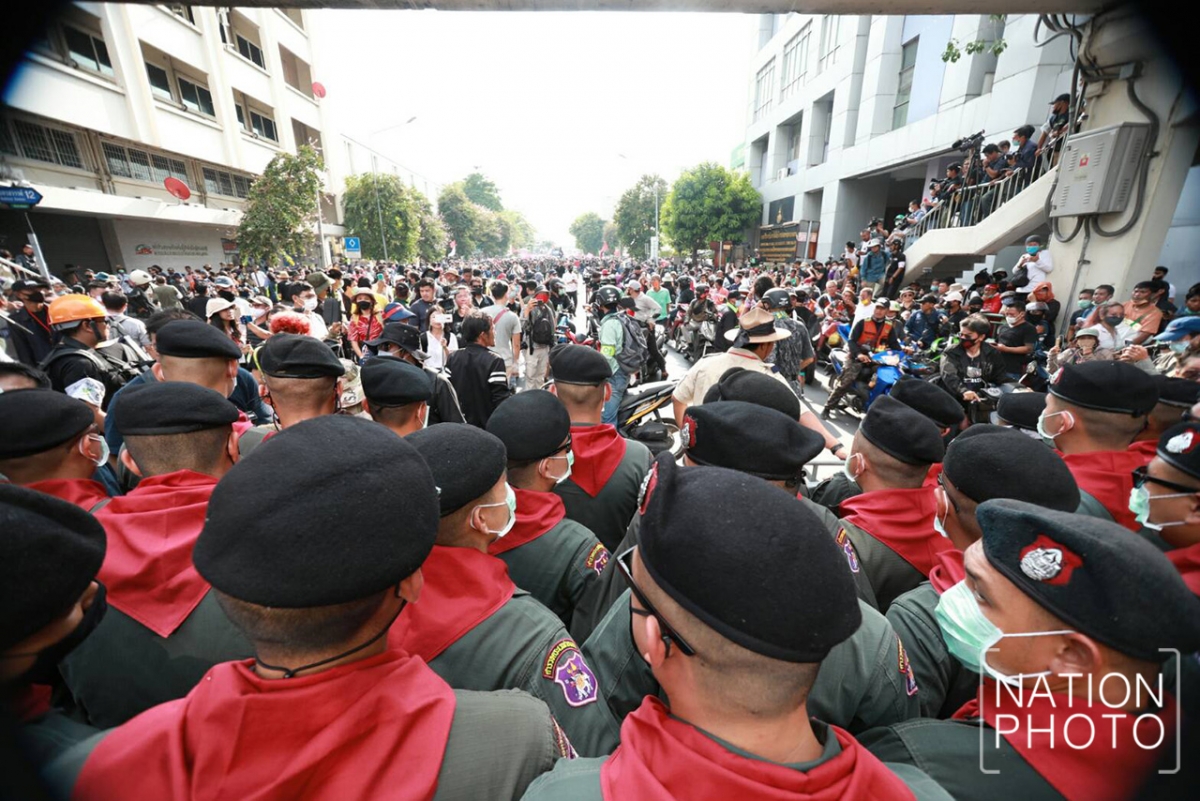 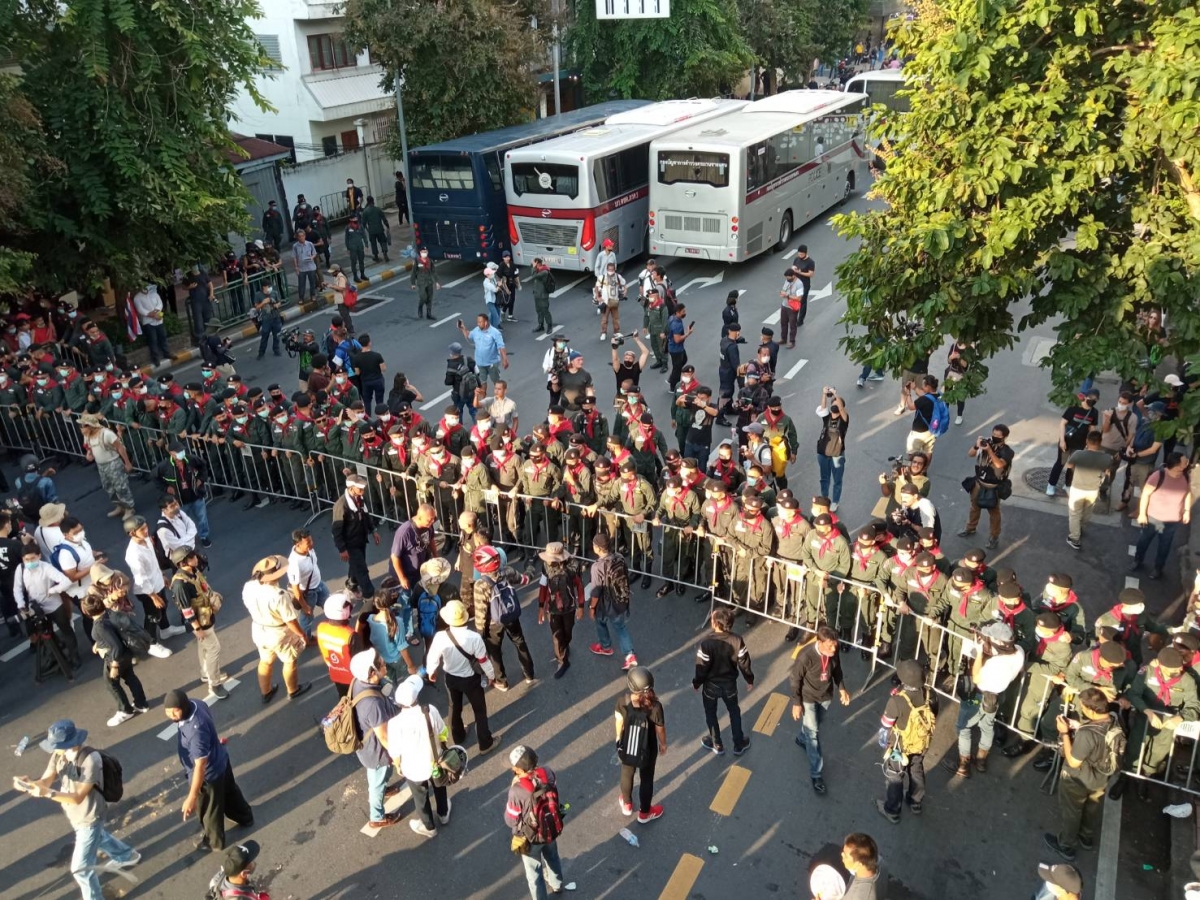 Protesters plan to stay overnight, though police say it is strictly prohibited.

# 4.30pm: Protest leaders make no progress in negotiations with police, as other protesters begin removing the barriers to get closer to Government House. Protest leaders, namely Arnon Nampa and Parit “Penguin” Chiwarak, try to calm the crowd to ensure peace.

The leaders then announce that police have relented and will let them approach Government House. Protesters are asked to wait until the path is cleared.

# 3.50pm: Protesters approach Nang Loeng Police Station where large buses had been parked to block their path. Some protesters shake the buses out of frustration as leaders step up to negotiate with police. Members of the protest are also told to maintain a distance from the authorities.

# 3.30pm: Protesters manage to cross Thewakam Bridge and police officers are stationed at the gates of Government House . Protesters are warned to maintain peace.

Staff and reporters are told to leave Government House to make way for protesters at 3.00pm, while protest leaders negotiate with police to let them pass.

# 2.30pm: Protesters tried to avoid checkpoints and barriers by taking the Nakhon Sawan Road to Government House, but were blocked by yellow-clad royalists and police.

# 2pm: Protesters have been removing potted plants placed near the Democracy Monument to make space for the rally.

# 1pm: Fights almost broke out as protesters tried to remove plants around Democracy Monument to make space and were stopped by the yellow-clad royalists.

Police then intervened and allowed the protesters to place the plants on the footpath before returning to their area.

News reports say civil servants dressed in yellow have been brought to the area to welcome a royal motorcade later in the day.

# 11am: Police have put up metal barriers across Rajdamnoen Road to block protesters from marching to Government House.

# 10am: The atmosphere was peaceful  until half an hour later, when police tightened their circle around the protesters, giving them little space to move, which resulted in conflicts.

Police are reportedly getting ready to use water cannons to control the crowds and will be collecting footage from surveillance cameras as evidence against the protesters.

Thanathorn Juangroongruangkit, leader of the now-defunct Future Forward Party, tried to negotiate with the police over claims that the protesters were violating several laws.

The Phra Buddha Isara Facebook page said these people were part of a yellow-shirt group led by Phra Buddha and had been reportedly recruited by the police.

However, the post generated criticism among pro-democratic netizens, who also slammed the city administration of starting a new movement.

Meanwhile, one of the yellow-shirts was seen raising a three-finger salute, making people wonder if the group had been brought in to join the protest.

Separately, at least three separate groups have shown up at or near the Democracy Monument to show their support.

As many as 10,000 police officers have been deployed to control the situation at the protest site at 11am, while lawyers have said that police should seek arrest warrants from the court before making arrests.

# 8am: Student protest commences as pro-royalists gather in area.

A mega political rally on Wednesday went ahead at 8am, instead of 2pm as earlier planned, with fears of a face-off between pro-royalists and student protesters.

Protesters from across the nation were gathering at Bangkok’s Democracy Monument on Wednesday morning. Around 10.30am, the protesters reportedly sprayed the words “Long live democracy” on Ratchadamoen Road.

At 8.40am, protest leader Anon Numpa cautioned protesters that police could step in to make arrests, as they did on Tuesday. He asked the rallyists to gather peacefully and advised them to immediately inform guards if they noticed or suspected anyone trying to instigate violence that would discredit the pro-democracy camp.

Pro-royalists and police were also assembling at the spot and nearby areas. However, no clash has been reported so far. 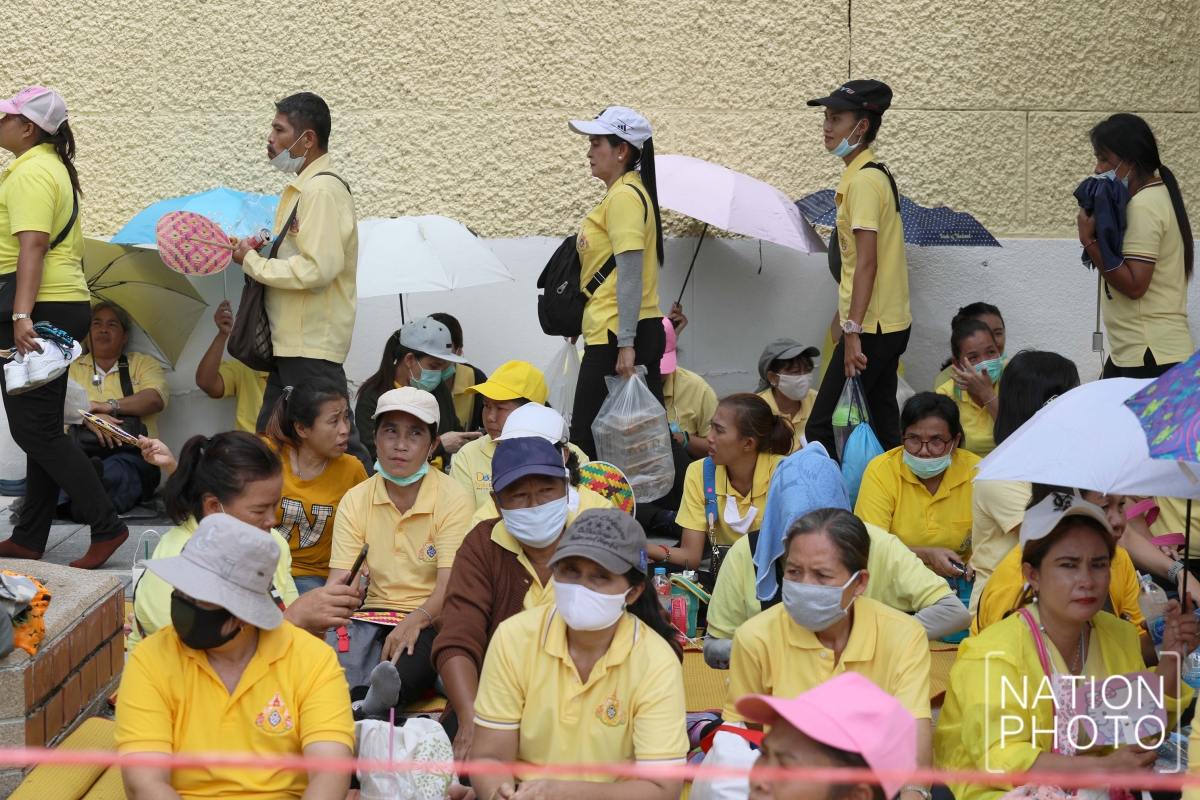 Some observers interpreted their presence to saving or consolidating a route on which His Majesty the King’s motorcade will drive through today.