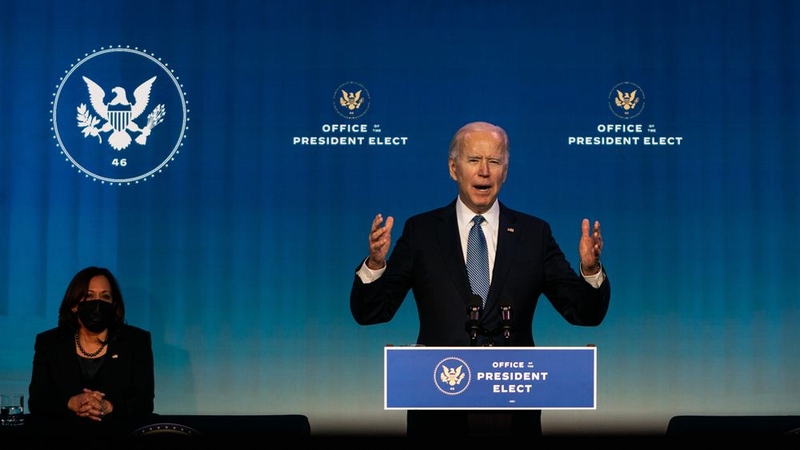 President-elect Joe Biden on Thursday denounced what he described as an unequal justice system reflected in the lenient response to the mostly White rioters who assaulted the U.S. Capitol this week, suggesting a stark contrast with the treatment of racial justice demonstrators across the country last summer.

“You can’t tell me that if it had been a group of Black Lives Matter protesters yesterday they wouldn’t have been treated very differently than the mob of thugs that stormed the Capitol,” Biden said in Wilmington, before beginning to hammer his fist against the lectern. “We all know that is true. And it is totally unacceptable. Totally unacceptable. The American people saw it in plain view.”

In some of his most pointed remarks to date on racial inequity, a topic he sometimes struggles to discuss despite his support from many Black voters, Biden pledged that the disparities would be addressed as he announced his Justice Department leadership team, including federal appeals court judge Merrick Garland as attorney general.

A central goal of his presidency, Biden said, would be to restore the department’s independence and reputation after four years of politicization under President Donald Trump, noting that he had chosen people with years of experience at the agency.

“I want to be clear to those who lead this department who you will serve – you won’t work for me,” Biden said. “You are not the president or the vice president’s lawyer. Their loyalty is not to me. It’s to the law, the Constitution, the people of this nation.”

Biden’s condemnation of racial injustice came after a year when police killings and street protests brought the issue vividly to the fore. Black activists have long cited a difference in the police handling of Black and White protesters, and the relatively hands-off treatment of Wednesday’s mob reinforced that impression for many.

Biden on Thursday related that his granddaughter Finnegan had sent him a photo of law enforcement officers lined up grimly at the Lincoln Memorial during a Black Lives Matter protest, highlighting a contrast with the handling of the Capitol mob, a disparity that many online commenters pointed out.

Biden takes control over the government in just two weeks, and he faces the additional complication of dealing with a Congress and a country reeling from Wednesday’s violence. Though some Republicans voiced disgust in the hours after rioters were cleared from the House and Senate chambers, the culture of division that led to the assault has been festering for years and is unlikely to dissipate quickly.

As he walked into the Queen theater in Wilmington, Del., Biden brushed off a question from a reporter about whether he supports invoking the 25th Amendment to end Trump’s term. Standing onstage later, he referred to the question, saying, “I’m not going to speak to that today.”

Biden did make a point of connecting Trump’s long history of divisive rhetoric to the White rioters trashing the Capitol, at least one of them hoisting a Confederate flag.

“I wish we could say we couldn’t see it coming, but that isn’t true. We could see it coming,” Biden said. “For the past four years, we’ve had a president who’s made contempt for our democracy, our Constitution, for rule of law, clear.”

It was an unusually harsh denunciation of an outgoing president by his successor. With less than two weeks remaining until Biden’s inauguration, the hostility between Trump and Biden is increasingly evident, as Trump continues to claim baselessly that he won the election.

With Thursday’s nominations, Biden has nearly finished filling out his Cabinet. In addition to Garland, his Justice Department team will include Lisa Monaco as deputy attorney general, longtime civil rights advocate Vanita Gupta as the department’s No. 3, and Kristen Clarke as head of its civil rights division. All face Senate confirmation.

Biden and his allies stressed that Garland, Monaco and Gupta have deep experience combating domestic terrorism and systemic racism, remarks that came as some lawmakers were calling for Wednesday’s riot to be classified as terrorism.

Garland spoke about his experience prosecuting in the Oklahoma City bombing case. Biden noted that Monaco helped coordinate the federal investigation into the Boston Marathon bombing and that Gupta was part of the investigation into racial disparities in the police department in Ferguson, Mo., after the killing of a Black man by police led to widespread unrest.

Also Thursday, a person familiar with the matter said Biden has tapped Rhode Island Gov. Gina Raimondo to be commerce secretary and Boston Mayor Marty Walsh to be labor secretary.

In the fraught atmosphere after Wednesday’s assault on the Capitol, some leaders in the Democratic coalition wondered whether Biden’s pledge to be a “unifier” was enough, and whether they could or should come together with a Republican Party that for four years has supported Trump’s incendiary rhetoric and dubious actions.

“The posture here is going to have to shift from compromise and negotiation to setting the tone and setting the path,” said Alicia Garza, a co-founder of the Black Lives Matter movement. “This is complicated, because Biden really was selected in a lot of ways as a caretaker president.”

The moment also laid bare nuanced differences in how Biden and Vice President-elect Kamala Harris view racial and social strife. In brief remarks Wednesday, Biden said the scenes at the Capitol “do not represent who we are” as a country, a sentiment he has regularly repeated.

Harris put it differently Thursday, saying, “We know we should be better than this,” suggesting that violence and racism are not an aberration but a tangible part of the country’s makeup that needs to be conquered.

“Sadly, yesterday was a big old mirror,” said Karen Finney, a Democratic strategist with ties to Biden’s team. “Biden is trying to call to our better angels. Perhaps what he could say is, ‘This doesn’t have to be who we are.’ “

During the presidential primary, Harris sometimes voiced frustration at questions about whether Trump was a racist or white supremacist, saying such queries sidestepped deeper questions about the country.

“I will not take part in a conversation that simplifies this issue,” Harris said at one point. “It happened before this guy was in the White House, it will continue after this guy was in this White House. He is certainly fanning the flames of hate; there’s no question about that. But if we’re going to have this conversation, let’s have it in a meaningful way.”

Harris, a former prosecutor, also took a more explicit stance than many of her fellow Democratic candidates in suggesting that Trump should face legal consequences for his actions, suggesting months before he was impeached that some form of penalty was warranted. Biden was less willing to call for impeachment or other consequences.

“I’ve seen prosecution of cases on much less evidence,” Harris said after the publication of special counsel Robert Mueller III’s report, arguing that it provided enough evidence for charges of obstruction of justice against Trump.

More broadly, the question of disparate legal consequences for different individuals and groups has become a heated topic in the riot’s aftermath. Former first lady Michelle Obama was among those weighing in Thursday.

“There’s one question I just can’t shake: What if these rioters had looked like the folks who go to Ebenezer Baptist Church every Sunday?” she wrote, referring to a prominent Black church in Atlanta. “What would have been different? I think we all know the answer.”

Amid the swirling discussion of justice, race and equality, Biden’s choice of Garland as attorney general has not been welcomed by leading civil rights groups, which had hoped he would pick an attorney general with a stronger record on racial justice.

About a month ago, Biden and Harris had met with the heads of seven civil rights organizations, and they pushed him to choose an attorney general – preferably a person of color – with a clear track record of fighting for civil rights.

The Rev. Al Sharpton, a Biden confidant, said Thursday that he was disappointed in the selection of Garland and wanted to meet with the nominee. Sharpton said he was unclear on where Garland stood on some questions, such as whether it should be illegal for police to turn off their body cameras, as many civil rights activists want.

“Where will Garland stand on that? At least to me, I’m not clear at all where his divisions are,” Sharpton said. “I call on Garland to meet with civil rights leadership.”

By contrast, Sharpton said he was well acquainted with the rest of Biden’s nominees – including Gupta and Clarke – and hoped they would prioritize reviving the Justice Department’s civil rights division and aggressively protecting voting rights.

“I want to hear from them that they are going to investigate to the fullest degree of the law the attempted coup d’etat yesterday,” Sharpton said.

Biden has been careful to avoid talking about prosecuting the current president. But on Thursday, he offered harsh word on that front, too.

“Our president is not above the law,” Biden said. “Justice serves the people. It doesn’t protect the powerful. Justice is blind.”